With Ferguson, Obama Forced To Confront Race Yet Again 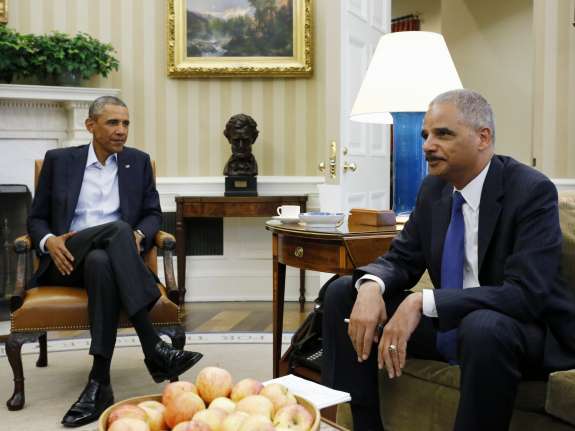 The tense situation in Ferguson, Mo., following the shooting of unarmed black teenager Michael Brown, is another test for President Obama. He’s struggled at times over how to navigate long-simmering tensions between police and the African-American community.

President Obama says he understands the passions and the anger that have engulfed Ferguson over the last week and a half, but he’s carefully avoided taking sides. His warnings against violent confrontation have been directed equally at the protesters and the police.

That studied even-handedness disappoints some African-American observers. Paul Butler, who studies race and criminal justice at Georgetown Law school, wants to hear more outrage from the president about the conduct of a nearly all-white police force in a town that’s two-thirds black.

“With the spectre of urban insurrection in an American city that looks more like Fallujah than Ferguson, this is not the time to be detached,” he says.

Others, however, defended Obama’s cautious approach. Joshua Dubois, who used to head the White House Office of Faith-based and Neighborhood Partnerships, says now that the Justice Department is investigating the Ferguson shooting, it’s important that the president not appear to be putting his thumb on the scale.

“There are a lot of folks who want President Obama to be all sorts of things: an activist, a marcher, a poet, a race theorist. But in this case, I need him to be the president. I need him to make sure that this investigation is carried out in a full and fair way and that that family and that community in Ferguson has closure in terms of the way the criminal justice system operates.”

A survey by the Pew Research Center finds sharp differences in the way the shooting and the police crackdown that followed are viewed by blacks and whites and Democrats and Republicans. It’s possible that a more one-sided approach from the president would simply deepen that divide. But Butler argues that’s no reason for Obama to hold back.

“Look, the president has his haters. And he’s always going to have his haters. I think he’s gone out of his way to try to appease them. And that’s resulted in neglecting not just his political base, but a large sector of the American population, including African-Americans, who need his leadership on these issues.”

Butler says he had high hopes when the first black president was elected. But Obama quickly learned the perils of speaking bluntly about race and law enforcement. Obama had been in office just six months when he was asked during a news conference about black Harvard professor Henry Louis Gates Jr. The professor had been looked out of his house and was arrested when he tried to force his way in.

“The Cambridge police acted stupidly in arresting somebody when there was already proof that they were in their own home,” Obama said.

The comment was catnip for cable TV, but the president had to backtrack just two days later.

“To the extent that my choice of words didn’t illuminate but rather contributed to more media frenzy, I think that was unfortunate.”

Obama later hosted a beer summit for the professor and the policeman. Afterwards, he scarcely mentioned race for the next three years.

Until Trayvon Martin, the black Florida teenager who was shot and killed by a neighborhood watch volunteer. “If I had a son, he’d look like Trayvon,” Obama said. And while he was careful not to second-guess the Florida jury that acquitted the shooter, Obama spoke in unusually personal terms about the painful suspicions that nearly every young, black man is confronted with.

“There are very few African-American men in this country who haven’t had the experience of being followed when they were shopping at a department store. That includes me.”

While Obama has generally steered clear of programs designed exclusively for African-Americans, he did launch an initiative this year focused on the challenges of young black men. He conceded this week that there’s a lot to do.

“In too many communities, too many young men of color are left behind and seen only as objects of fear. Through initiatives like My Brother’s Keeper, I’m personally committed to changing both perception and reality.”

Obama has described the initiative as a long-term project. But observers like Lester Spence of Johns Hopkins University grow more impatient each time another young black man is killed in a place like Ferguson, Mo.

“I am so tired and frustrated. And I know America’s a better place than it was. But this continues to happen? And we’ve got a black guy as the president? You’ve got to be kidding me.”