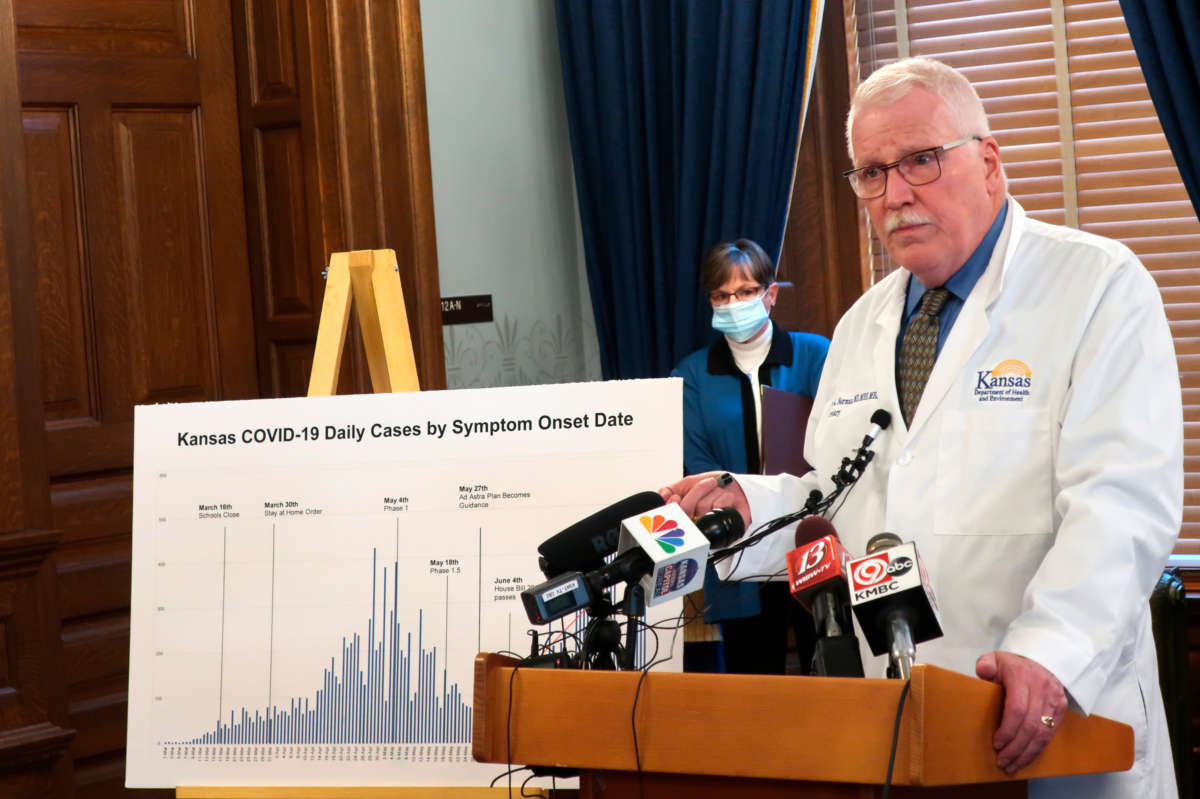 New federal rules for reporting data have caused confusion and delays for state officials trying to monitor the pandemic. Dr. Lee Norman, Secretary of the Kansas Department of Health and Environment, discussed the resurgence in coronavirus cases in Kansas on July 15 in Topeka. Norman called the resurgence "awful."
Image credit: John Hanna

Just as the number of people hospitalized for COVID-19 approaches new highs in some parts of the country, hospital data in Kansas and Missouri is suddenly incomplete or missing.

The Missouri Hospital Association reports that it no longer has access to the data it uses to guide statewide coronavirus mitigation efforts, and Kansas officials say their hospital data reports may be delayed.

The Trump administration this week directed hospitals to change how they report data to the federal government and how that data will be made available.

“All evidence suggests that Missouri’s numbers are headed in the wrong direction,” Dillon wrote. “And, for now, we will have very limited situational awareness. That’s all very bad news.”

The absence of the data will make it harder for health and public officials, as well as the general public, to understand how the virus is spreading.

The White House instructed hospitals to report data to the Department of Health and Human Services through a new system created by a Pennsylvania-based company, TeleTracking, instead of sending it to the Centers for Disease Control and Prevention, as they had been doing.

The directive came as a surprise to hospitals, according to Kansas Hospital Association spokesperson Cindy Samuelson.

“From our perspective, these changes are big,” Samuelson says. “We only found out Tuesday, and we had to update the data by Wednesday night — so, less than 48 hours.”

The Missouri Hospital Association currently does not have access to the new HHS system, according to Dillon. He says the new system is also significantly different from the CDC system.

“The new datasets for reporting are not identical and in several cases are ill-defined,” Dillon says. “That has complicated hospitals’ efforts.”

In the wake of the announcement, the Missouri Department of Health and Senior Services posted a notice on its website this week that the daily and weekly updates on hospitals, including the numbers of people hospitalized and the availability of standard hospital beds, ICU beds and ventilators, would be temporarily halted.

“Missouri Hospital Association (MHA) and the State of Missouri will be unable to access critical hospitalization data during the transition. While we are working to collect interim data, situational awareness will be limited,” the notice on the department’s website says.

Dillon says the hospital association hopes to have “within a few days or weeks” the hospital and coronavirus data that had been available through the CDC.

“However, in the short term, we’ll be very much in the dark,” Dillon says.

The hospital association will create an alternative reporting system for hospitals, according to Dillon, and plans to continue producing weekly reports, despite the uncertainty about data.

The Missouri Department of Health and Senior Services did not respond to inquiries regarding the data.

Kansas health officials are still able to access hospital and coronavirus data through the CDC and TeleTracking, according to Kansas Department of Health and Environment spokesperson Kristi Zears.

However, the Kansas Hospital Association says the Kansas hospital data may be delayed if it is incomplete.

“If we’re not able to get a bulk of our members converted and uploading, I’m not sure we want to show it because then it will look like things have gotten a lot better,” says Cindy Samuelson, the KHA spokeswoman.

The Trump administration had said the reporting change was needed due to reporting delays and other problems with the CDC.

But the move has been widely criticized for being disruptive, especially as COVID-19 infection numbers reach new highs and hospitals in some areas of the country are reaching capacity.

“By now, we should have a foolproof, streamlined reporting system for COVID,” Maddox says. “And this change — midstream — is not going to do anything to help our ability to fight the disease.”

This story comes from NPR’s reporting partnership with KCUR and Kaiser Health News.