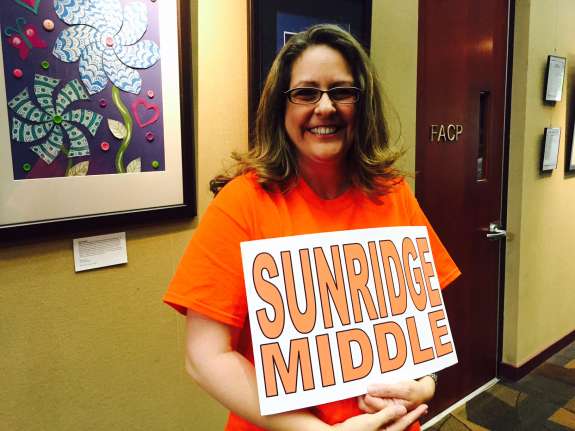 Yolianne Amadeo wants the county to break ground on a new high school in Windermere by the summer. Photo: Catherine Welch, WMFE

The Orange County Board of County Commissioners has approved a settlement agreement to build an expansion high school in Windermere.

Supporters of the school say they want it built soon.

The school in the Windermere Rural Settlement would have capacity for over 2,700 students, with a football stadium separate from the main campus, one mile from the school.

The school board says the new campus is needed to relieve crowding at West Orange High.

Yolianne  Amadeo was one of dozens of orange t-shirt wearing supporters who spoke in favor of the school. “We really need to go ahead and open ourselves and give the opportunity for better conditions, better for our students.” said Amadeo.

“A high school is definitely something much needed, not wanted, much needed.”

Opponents say they’re worried about noise, traffic and lights from the stadium. Karen Consalo spoke on behalf Citizens United for Sensible Growth, a group of residents concerned about the proposed school. She told commissioners the school should be capped at 2,000 students.

“That is just of vital importance.” said Consalo.

Further public hearings on the proposed school are scheduled for April 28th and May 5th.