Why WHO Is Calling For A Moratorium On COVID Vaccine Boosters 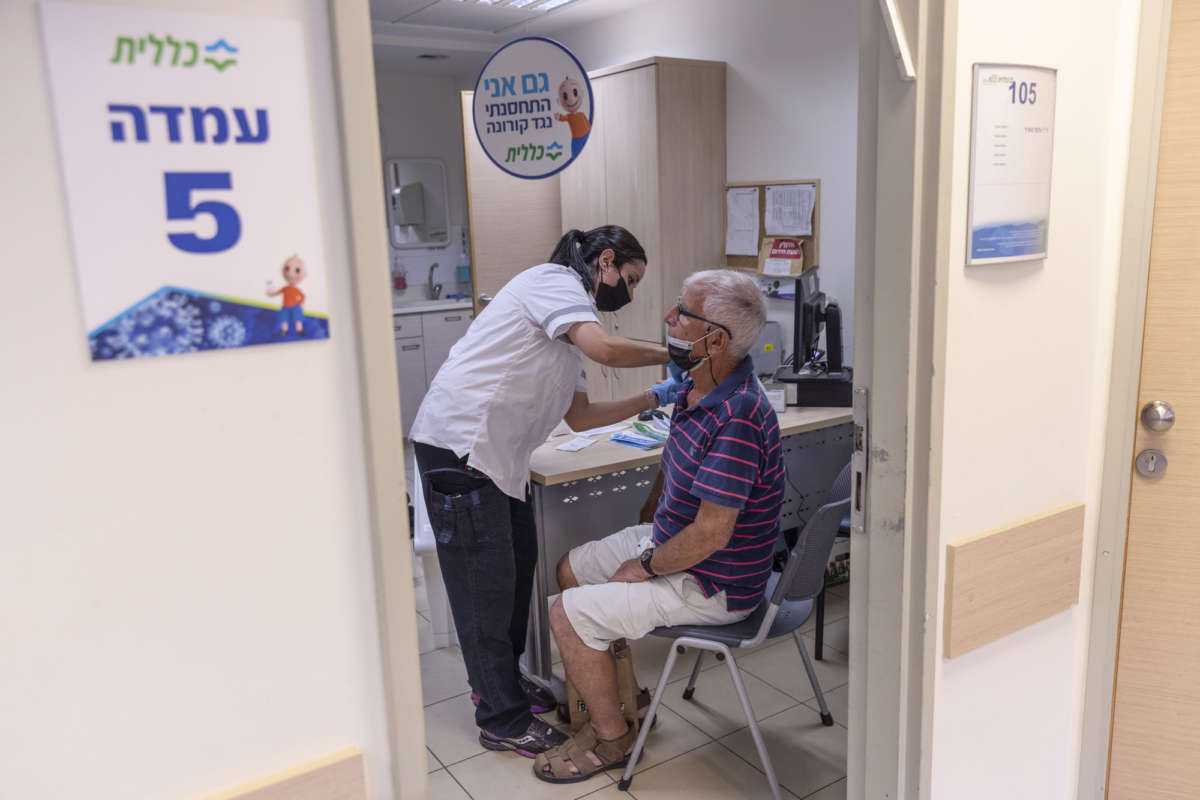 The director of WHO now says that a booster moratorium should be in force until 10% of the population in all countries is vaccinated. Israel had previously announced plans to give a third Pfizer dose to residents age 60 and up after an uptick in COVID cases. Above: Administering a booster on August 2 in Tel Aviv.
Image credit: Kobi Wolf

Tedros Adhanom Ghebreyesus, the director general of the World Health Organization, is now calling for a moratorium – for at least the next two months – on COVID booster shots.

“We should not accept countries that have already used most of the global supply of vaccines, using even more of it,” he says, “while the world’s most vulnerable people remain unprotected.”

WHO is saying that people who are fully immunized against COVID should hold off on getting a third shot until more people around the world can get their first dose of a vaccine.

It’s a controversial stand in some quarters. White House press secretary Jen Psaki dismissed the call for a booster moratorium, saying that WHO is setting up a “false choice.”

The global inequity in vaccine availability cited by Tedros has been stark. More than 80% of COVID vaccines have been administered in high-income and upper-middle income nations. The United Kingdom, for example, has vaccinated nearly 65% of its population while just 7% of Filipinos are immunized. The U.S. is vaccinating teenagers at low risk of contracting COVID while front-line health-care workers in Nigeria are still awaiting their shots.

And in a trend that’s troubling to WHO, Israel has just started offering booster doses of Pfizer to people over 60. By contrast, in the Palestinian territories fewer than 12% of residents have gotten any vaccine at all.

WHO isn’t ruling out all boosters in the near future. The global health agency says boosters may be necessary for a small number of people with specific medical conditions. But studies haven’t yet proven that booster shots would add significant protection right now to the general public, WHO notes. That’s why Tedros is calling for a ban on boosters for at least two months to reach his target of getting 10% of people in every country vaccinated by September 30.

Beyond that time frame, WHO’s goal for global vaccination is 40% by the end of December and 70% by mid-2022. Yet with fewer than 2% of people in Africa fully vaccinated, the chances of hitting the first benchmark by October 1 is nearly impossible.

If the Food and Drug Administration decides that boosters are appropriate, White House press secretary Psaki says the U.S. will provide these shots to Americans. She says the U.S. has enough supply to offer boosters at home and donate doses abroad: “We believe we can do both. We don’t need to make that choice.”

But Jarbas Barbosa, assistant director of the Pan American Health Organization, says from a public health perspective giving boosters in some countries ahead of first doses in others makes no sense. COVID boosters haven’t yet won authorization from major regulatory bodies such as the FDA or WHO. Giving them right now, adds Barbosa, is “morally and ethically complicated.”

Ruth Karron, a professor of international health at Johns Hopkins University, is even more forceful in saying that ongoing disparities in global health are “morally and ethically complicated.”

It’s more important to stem the pandemic by vaccinating as many people as quickly as possible rather than focus on boosters, she believes.

“New variants are most likely to arise in unvaccinated populations,” she says. “So the more of the world that’s unvaccinated, the more we are all at risk.”

The Delta variant has shown how quickly progress against this pandemic can shift and how cases rise sharply even in countries with high vaccination rates.

“It should be the right of everyone in the world in the context of this pandemic to get vaccinated,” says Karron. She recognizes that some people don’t share her humanitarian approach to this issue but says even for people who care mainly about ending the pandemic here in the U.S., the goal should still be the same.

“It is in the best interest of the U.S. population to have as much global immunity as possible,” she says, “because that’s how we prevent new variants from arising.”