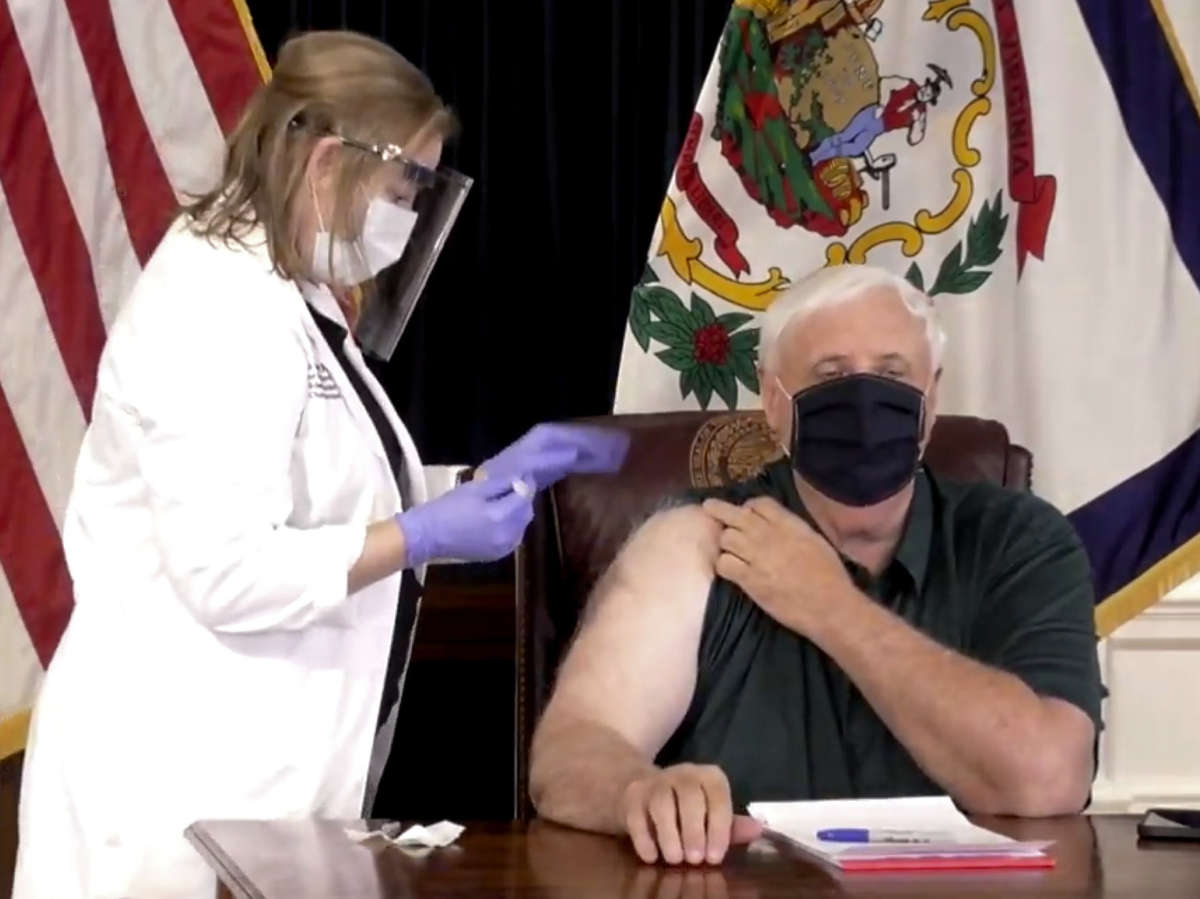 In this image made from video released by the State of West Virginia, a nurse administers a coronavirus shot to west Virginia Gov. Jim Justice, Monday, Dec. 14, 2020, in Charleston, W.Va. The 69-year-old Republican governor said he would receive a shot before cameras which would make him one of the first top elected officials in the country to get vaccinated. Officials said they want to demonstrate their confidence in the vaccine. (State of West Virginia via AP)

Nearly two weeks before most states started vaccinating anyone in nursing homes, pharmacist Gretchen Garofoli went to a long-term care facility in Morgantown, W.Va., on Dec. 15 and administered one of the first COVID-19 vaccinations in the state.

“Psychologically, yes, it was a beacon of hope,” she says.

So far, West Virginia is outpacing the rest of the country. Having delivered vaccine to health workers and completed a first round of shots at all its long-term care facilities, the state is now administering second doses and moving on to other populations, including people age 80 and over, and teachers who are 50 and older.

Meanwhile, many other states are still struggling with the complex logistics of distributing the lifesaving medicines.

“A lot of people are looking to us as a state, because after the first week we had, I believe, something like 90% of doses allocated to our state in arms — which was really unheard of elsewhere,” says Garofoli, who is also a clinical associate professor of pharmacy at West Virginia University.

She and other health officials say there is likely a number of reasons behind their early success.

For one thing, West Virginia has been charting its own path to vaccine distribution. All 49 other states signed on with a federal program partnering with CVS and Walgreens to vaccinate long-term care and assisted living facilities. But those chain stores are less common in West Virginia, so the state instead took charge of delivering its vaccine supply to 250 pharmacies — most of them small, independent stores.

The federal plan to rely on big chains to get the shots to long-term care facilities wasn’t going to work for her state, Garofoli says.

“We have a lot of independent pharmacies or smaller pharmacies that are in the more rural communities, so in order to get the vaccine out to some of those areas, we needed to follow something a little bit different,” she says.

Many long-term care sites in the state already use local pharmacies for other vaccines and medicines as well as twice-weekly coronavirus testing of residents and staff. The state decided to piggyback off those existing relationships. Because those pharmacies already had data on many patients, it was easier to begin scheduling appointments in early December, securing consent forms and matching doses to eligible patients — logistics that are confounding efforts in many other states.

This scheme gave the state an early jump on most other states, says Krista Capehart, director of regulation for the state’s Board of Pharmacy and chief architect of West Virginia’s distribution plan. When vaccines finally arrived, pharmacists were ready, and knew the number of doses they’d need.

“When it got here, we already had pharmacies matched with long-term care facilities, so we were already ready to have vaccinators and pharmacists ready to go into those facilities and start providing first doses,” Capehart says.

Delays in advance paperwork and the logistics of distributing these particular vaccines have tripped up the pace of immunization in some other states, says Claire Hannan, executive director of the Association of Immunization Managers.

State and local officials in other places may not have been able to coordinate as smoothly, she says. “They’re trying to get CVS and Walgreens to come to their facilities, and CVS and Walgreens are moving at the pace they’re moving.”

In contrast, Hannan says, West Virginia is more directly in control of the flow of vaccines to long-term care facilities. It’s a smaller operation that can adapt and switch gears, while other states must navigate the bureaucracy of huge national chains. “They’re not as flexible, they’re not as nimble as public health to make adjustments” to move people and vaccine supplies around, she says.

There also have been some missteps in West Virginia. Most notably Boone County health officials injected 42 people with an antibody cocktail instead of vaccine, though were no adverse consequences reported as a result of that error.

CVS and Walgreens dispute the assertion that their rollout is falling behind.

“We remain on schedule, and the number of vaccines we administer will continue to rise as more facilities are activated by the states,” CVS CEO Larry J. Merlo said in an update posted Wednesday on the company’s website.

Both chains say their immunization schedule is on track, and that they will complete initial doses for all long-term care facilities by Jan 25 — about a month after West Virginia hit its milestone.

States eager to speed up the process should take note of the gubernatorial leadership in states such as West Virginia and Connecticut that are doing relatively well, says Mark Parkinson, CEO of the American Health Care Association, a long-term care trade group and a former governor of Kansas.

“What I would be doing if I was governor is I would be on speed dial with the CEOs of CVS and Walgreens every single day,” he says.