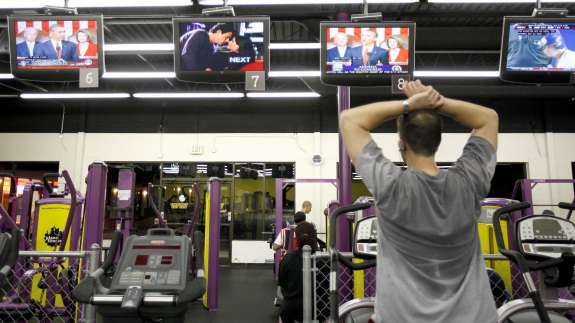 It’s right about now when many of us start thinking about the G-word – the gym – perhaps joining one or actually going to the one we joined last year or the year before.

If you are not using your gym membership, you’re not alone. Most gym members don’t go. In fact, as Stacy Vanek Smith of our Planet Money team reports, not going makes you one of your gym’s best customers.

STACY VANEK SMITH, BYLINE: Planet Fitness is one of the cheapest gyms around – $10 a month. And this is Manhattan; rents are really high here. To figure out how they can do this, I went to a Planet Fitness in Midtown, and I ran into Gequan Boyce. He and his friend had just finished working out.

How often you guys come?

GEQUAN BOYCE: Five days a week, actually. That’s Monday to Friday because I work in the city.

VANEK SMITH: So do you mind if we run your card and see how often you’ve actually been?

BOYCE: The moment of truth.

VANEK SMITH: Twice in a week?

VANEK SMITH: Two days a week. This kind of optimism is totally normal. In fact, gym’s count on it.

How many people can workout in the gym at once?

CHRYSANTHI LASKARIS: I mean, I’d say a few hundred, to be completely honest.

VANEK SMITH: Chrysanthi Laskaris manages this Planet Fitness. So it can accommodate 300 people. How many members does it have?

VANEK SMITH: What would happen if they all came?

LASKARIS: Oh, my goodness, we’d have a very crowded gym (laughter). Thank goodness they all don’t show up at one time.

VANEK SMITH: Because if they did, Planet Fitness would need 20 times more space and lots more deep cleaning and equipment repair. It would have to charge a lot more than $10 a month. Gyms need to attract customers who won’t come. How do they do it? One key is design.

VANEK SMITH: Rudy Fabiano designs gyms all over the world. We’re standing in one of his newest, in Downtown Manhattan.

FABIANO: So you could see people sitting in the lounge downstairs, right? And then you walk in and it looks – feels like a store, it doesn’t feel like your traditional health club. You really don’t see any equipment.

VANEK SMITH: The actual equipment, the gym part of the gym, that’s down a set of stairs through the lounge, behind a wall. This kind of design gets you in the door, gets you comfortable. And before you know it, you’re signing one of those ironclad annual contracts.

KEVIN VOLPP: Joining a gym is an interesting form of what behavioral economists called pre-commitment.

VANEK SMITH: Kevin Volpp directs the Center for Health Incentives and Behavioral Economics at the Wharton School. He says people like the idea of being locked into an annual gym contract, at first, anyway.

VOLPP: They’re picturing the new me, who’s actually going to go to the gym three times a week and become a physical fitness machine.

VANEK SMITH: Which doesn’t happen. But every person who doesn’t go to the gym is actually subsidizing the membership of people who do. If you actually go to the gym, you can work out for a ridiculously low price. But there are alternatives.

ANNIE VO: It’s not that nice in here. (Laughter) Do you notice there’s nowhere to sit? There’s no mirrors in here.

VANEK SMITH: Precision Athlete is on the Upper West Side of Manhattan. It has 150 members. And owner Annie Vo says if they don’t come, she will refund their money and kick them out of the gym.

VO: A common thing that you’ll hear is, I’m too busy – I have this and that. I’m like Vladimir Putin works out every day. I would argue that he’s pretty busy. Are you busier than he is?

ANDREW ATIYA: There’s no mirrors. There’s no disco music playing right now. There’s no, like, slogans. This is a really sincere place.

VANEK SMITH: Sincerity means no annual contract, no cafe-style design, no subsidy from all the slackers who don’t show up. And so we can finally see what a gym that everyone actually uses would cost. The average member at Precision pays around $800 a month. Stacy Vanek Smith, NPR News. Transcript provided by NPR, Copyright NPR.