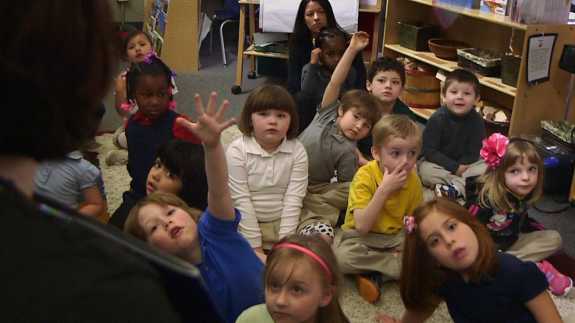 Why does public school start at age 5?

Neuroscientists say the most important brain development begins at birth. Friedrich Froebel, who coined the term “kindergarten” in Germany in the mid-19th century, was among the first education thinkers to intuit this fact about the brain. His “child-gardens” were mixed-age classrooms of children from 3 to 7 years old, who learned through play.

When reformers such as Boston’s Elizabeth Peabody brought kindergarten to the United States, they followed Froebel’s mixed-age model. But when kindergartens became incorporated into public school systems, beginning in the late 19th century, the age cutoff was generally set higher, at age 5.

Wednesday, President Obama invited researchers, educators and philanthropists to the White House to reopen the conversation about the importance of quality learning for even the youngest children.

“Early education is one of the best investments we can make, not just in a child’s future, but in our country,” the president said. He announced grants for a number of states, including Nevada, Montana and Virginia, for a total of $250 million in Preschool Development Grants and $500 million in Early Head Start Child Care Partnership awards.

This is exactly 1 percent of the $75 billion Preschool for All initiative the president proposed last year. Congress, so far, has allocated $1.4 billion. Lamar Alexander, the Republican who is expected to become chairman of the Senate Health, Education, Labor and Pensions Committee, told NPR Ed last month that he opposes a “Medicaid”-size new public investment in pre-K.

Still, the push is continuing at the local level, as more than 30 states and cities have expanded preschool offerings since last year. Philanthropies are pitching in, too.

Wednesday, the administration announced the launch of Invest in US, an independent initiative of private commitments to early childhood education. So far, the group has pledged more than $330 million, including $55 million from The Walt Disney Co. and $10.2 million from a collection of philanthropic and private partners in the Cleveland area.

Many of the ideas on the agenda go beyond pre-K for 4-year-olds. In many ways, in fact, they resemble the services offered by the first kindergartens more than a century ago. Back then, kindergartens were associated with the “settlement house” movement of community centers to aid the urban working class.

Settlement houses included kindergartens along with infant nurseries, health and nutrition programs, parenting classes and even home visits for expectant and new parents — all ideas being proposed for low-income parents today. At the same time, the Department of Education is starting to get down to brass tacks regarding what exactly “high quality” early learning means. It is setting expectations that states adequately train preschool teachers, and pay them comparably to K-12 staff, for example.

NPR Ed has been tracking the growing interest in early learning, which is based on longitudinal studies that demonstrate long-term gains for low-income children.

We visited a program in Tulsa, Okla., which is widely considered a national model for high-quality preschool.