Why The New Census Data Won’t Give A Full Picture Of Race And Ethnicity In The U.S. 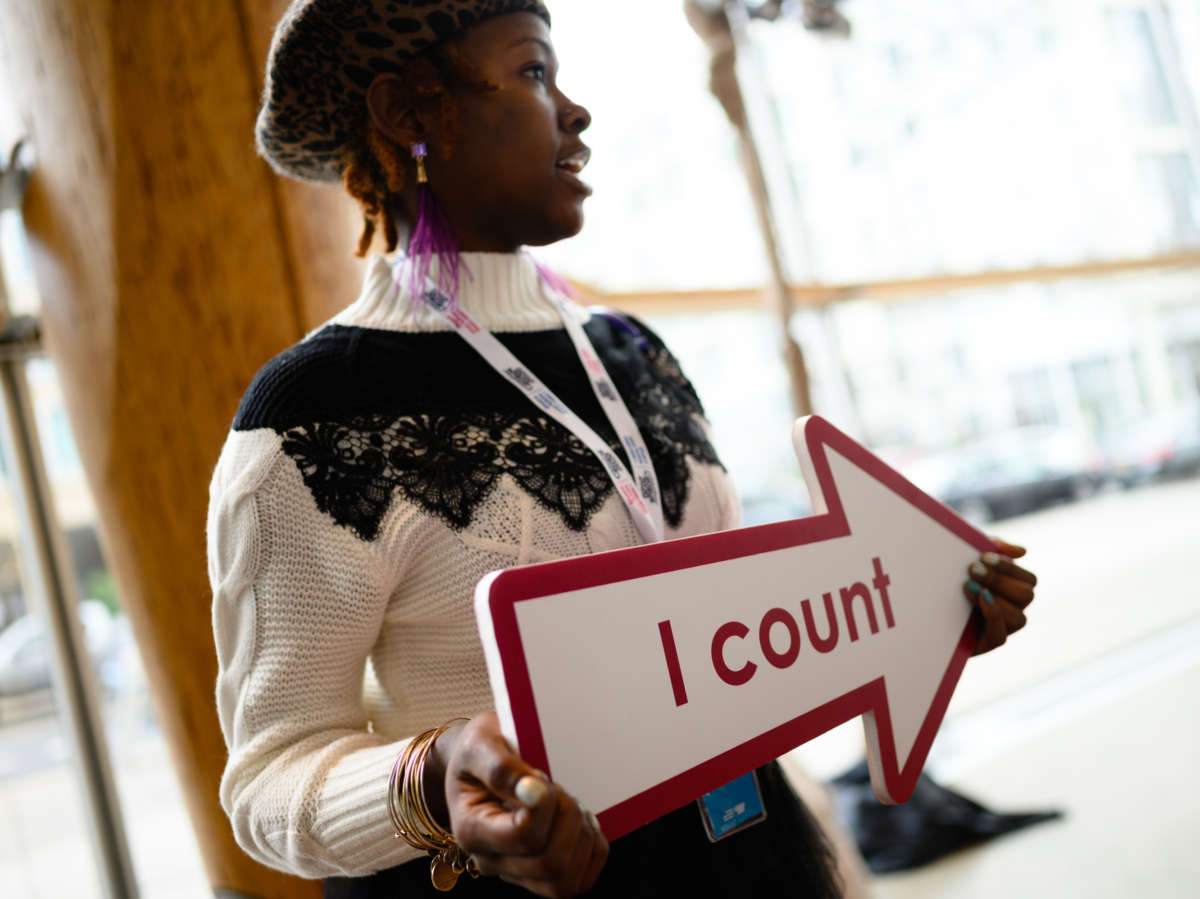 Whitney Turner, an employee of the U.S. Census Bureau, holds an "I count" sign at a 2020 census advertising campaign event in Washington, D.C., in January 2020.
Image credit: Sarah L. Voisin

A new portrait of the racial and ethnic makeup of the U.S. is set to be unveiled Thursday when the Census Bureau releases the largest trove of results from the 2020 count so far.

The basic demographic information about how the country’s residents self-identify will be used to redraw voting districts, enforce antidiscrimination laws, and inform research and policymaking for the next decade.

Despite the challenges the 2020 census faced, including the coronavirus pandemic and interference from former President Donald Trump’s administration, Census Bureau acting Director Ron Jarmin says the data is “high quality” and “fit to use for redistricting.”

Still, there are complications baked into the new race and ethnicity numbers. Since the first national head count in 1790 — which used the categories of “Free white,” “All other free persons” and “Slaves” — every picture of the country’s demographics the census has captured has been flawed.

Here’s what you need to know:

People of color were likely undercounted in the 2020 census

In 2010, the Census Bureau estimates it overcounted people who checked off the “White” box for the race question and did not identify as Hispanic or Latino, while it undercounted Black and Latinx populations, as well as Native Americans who live on reservations. For the 2020 census, there are concerns that high government distrust among immigrants and other historically undercounted groups — fueled in large part by Trump’s failed push for a citizenship question — will produce another undercount of people of color. Those worries came before COVID-19 upended census outreach plans and the Trump administration decided to end door-knocking efforts early. (The bureau is not expected to release 2020 census over- and undercounting rates until early 2022.)

Many households left the race and Hispanic origin questions unanswered

Last November, Jarmin, the bureau’s acting director, sent an early signal flare about the quality of the demographic data from the 2020 census. In a blog post, Jarmin noted that the agency’s preliminary analysis showed there was a higher rate of households not answering the race and Hispanic origin questions in 2020 compared to the previous count. Jarmin then revealed in July that the bureau has been dealing with higher “nonresponse rates for characteristics than we’ve experienced in past censuses.” To fill in those blanks, the agency relies instead on government records, interviews with neighbors and, as a last resort, educated guesses through imputation — a statistical technique that, a former Census Bureau director has warned, tends to overrepresent white people who do not identify as Latino while underrepresenting people of color.

Data about Latinos may be skewed

In preparing for the 2020 count, the Census Bureau was planning to reframe race and ethnicity questions on the form in a way that, according to years of the bureau’s own research, would have collected more accurate data about people’s Hispanic or Latino origins. The proposed changes would have required policy changes by the White House’s Office of Management and Budget, which, under the Trump administration, stalled on making a public decision on the proposal.

As a result, the 2020 census forms asked people whether they are “of Hispanic, Latino, or Spanish origin” and then asked for their race.

That two-question format may have captured race and ethnicity data that is not fully representative of the Latinx population, results from an online survey the Pew Research Center conducted suggest.

“Many people of Hispanic origin say that they don’t see themselves in the race question or even the Hispanic question,” says Mark Hugo Lopez, director of race and ethnicity research at Pew. “As a researcher, that suggests to me we need to think about other ways to ask about people’s identity, because people’s identity can be very, very rich and have a lot of nuances to it.”

According to federal standards, a person with “origins in any of the original peoples of Europe, the Middle East, or North Africa” is officially categorized as “White.” Those data specifications are set by OMB and must be followed by the bureau. There has long been a push to include a separate check box for Middle Eastern and North African (MENA) groups. It was looking like one would appear on 2020 forms, but that possibility passed. That was a result of the Trump administration’s stalling on the proposed policy changes that would have allowed the bureau to change how it asks about race and ethnicity.

“That is the quintessential lesson of a nonaction is an action,” says Maya Berry, executive director of the Arab American Institute and a longtime advocate for a separate MENA category on census forms. “It was an extraordinary disappointment.”

Berry says she is hopeful that the additional write-in spaces the bureau added to the 2020 census race question encouraged more people to report their MENA origins, such as Lebanese and Egyptian. But that level of detailed race and ethnicity data would be part of a later batch of 2020 census results, and that release may be complicated by the bureau’s new privacy protections.

To try to keep up with advances in computing, the Census Bureau is using a new way of keeping people anonymous in 2020 census redistricting data. Those protections, the bureau has warned, will make some neighborhoods look “fuzzy” because they’re intentionally designed to obscure their characteristics. While the bureau says the “fuzziness disappears” at higher levels of geography, many data users are concerned about the reliability of race and ethnicity data about rural communities and small geographic areas.

How a person self-reports their racial and ethnic identity can change from one census to another. This kind of churning is especially common among people who have identified as Hispanic or Latino, American Indian, Alaska Native, Pacific Islander or who have checked off boxes for more than one racial group, according to a study by Carolyn Liebler, a sociologist at the University of Minnesota, and Census Bureau researchers who compared responses from the 2000 census with those from the 2010 count.

“All of these populations that have a lot of churn are potentially much bigger than you would actually see in one census,” Liebler says, noting that how people decide to answer the census race and Hispanic origin questions can be influenced by their family trees, how they are perceived and treated by others and other complicated factors.

Measuring white population changes depends on how you define “white”

Some demographers are expecting the 2020 census results to mark a potentially historic moment. “The 2010s could be the first decade when the nation’s white population registered an absolute loss,” William Frey, a demographer at the Brookings Institution, wrote in June about an analysis of the Census Bureau’s population estimates.

Frey’s analysis uses a specific definition of “white” — people who only checked off the “White” box for the census race question and did not identify as Hispanic or Latino. For data used to enforce civil rights laws, the federal government has adopted a similar definition and specified in 2000 that anyone who identifies with the “White” category and with “one minority race” should be “allocated to the minority race.”

But Richard Alba, a sociologist at the Graduate Center of the City University of New York and author of The Great Demographic Illusion, contends those definitions are too limiting and disregard the growing numbers of people of multiple backgrounds, including white.

“The categories that we use — like white, Hispanic, Black — are becoming more heterogeneous within themselves because they include parts of this mixed group,” Alba says. “And that could affect over time our understanding of the degree of racial inequality in the United States.”

Changes to how the bureau sorted through the write-in responses to the race and Hispanic origin questions are likely to increase the number of people recorded in the 2020 results as identifying with more than one racial group compared to 2010 data, says Liebler, the University of Minnesota sociologist who has advised the bureau on data about race and ethnicity.

“It would be a mistake to make detailed comparisons of 2020 race/ethnic populations to other data not processed with this new, inclusive coding strategy unless the researcher knows the impact of the coding change,” Liebler says.

Data crunchers may uncover “unexpected differences” when comparing these new census results with other data sets, Rachel Marks and Merarys Ríos-Vargas of the bureau’s population division warned this month in a blog post, which also detailed some minor changes to the census questions.

In a statement, the bureau tells NPR it’s not able to reproduce 2010 census data using its new coding procedures because of “limitations in the number of characters” processed for write-in responses in 2010.