Why the most powerful space telescope ever needs to be kept really, really cold 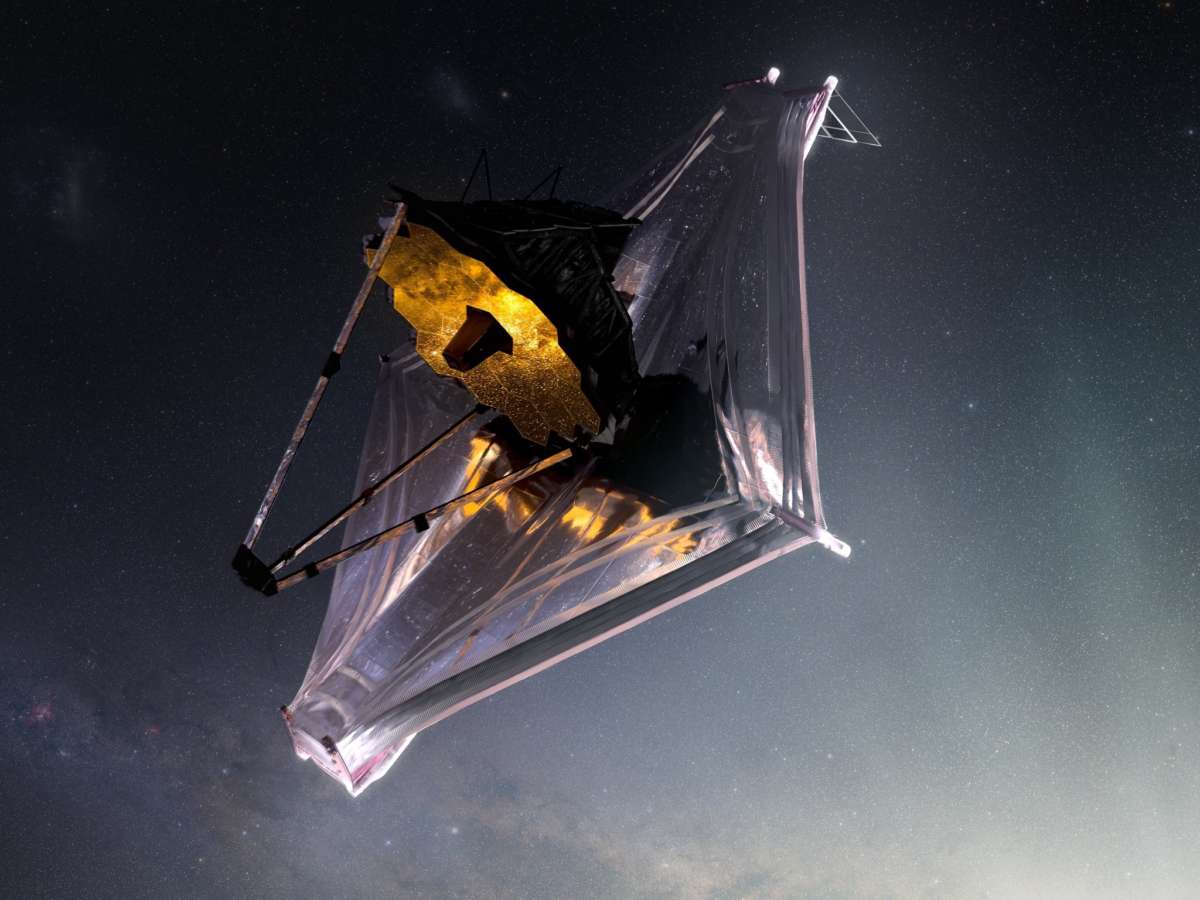 This is an artist's rendering of the James Webb Space Telescope. The kite-shaped sunshield is the largest component of the telescope.

The James Webb Space Telescope is set to launch later this week. When it does, it will be the most powerful space telescope ever.

Armed with the telescope, scientists intend to peer back in time to the formation of the earliest galaxies in the universe, to study how our solar system evolved and to analyze the atmospheres of distant planets, searching for gases that might signal habitability.

“It’s gonna be amazing and it’s still a little mind-blowing to think about it,” Jane Rigby, NASA project scientist for operations of the telescope, told NPR. The light from these distant galaxies has been traveling to Earth for over 13 billion years, she said.

In order to make these observations, the scientific instruments on the telescope need to be kept incredibly cold. That means a crucial part of the telescope is the massive sunshield that will protect it from the heat of the sun.

One of the main focuses of the launch is making sure the huge and complicated piece of equipment opens correctly.

To block out heat, build a shield the size of a tennis court

An imposing exact replica is stored in a massive clean room at a Northrop Grumman facility in Los Angeles County, Calif. The aerospace technology company is partnering with NASA on the project.

The sunshield’s purpose can also be understood by thinking about the sunscreen you put on at the beach. “The sunshield creates an SPF of about a million,” says Bill Ochs, the James Webb Space Telescope project manager, as he points out the features on the replica.

Designed to minimize the amount of extraneous heat hitting the scientific instruments, the sunshield is composed of five layers, each cooler than the one before it.

The layers are made of a very heat-resistant material called Kapton that is coated in aluminum, and have a special silicon on the two outermost layers to reflect the sun’s heat back into space. Across the five kite-shaped layers, more and more heat is lost, radiating out into space in the gaps between them. The outermost layer will be hit by heat from sources like the sun and earth and could reach a toasty 230 degrees F. By comparison, the layer closest to the instruments will reach about -394 degrees F.

Scientists have specially crafted these layers in the hope the mission will last a decade. The team anticipates that over the course of those years, the sunshield will be hit by debris in space. That’s why each layer is basically a high-tech quilt. Scientists created each layer by stitching together 50 individual pieces with technology to prevent small holes or rips from getting too big.

That technology is called rip stops. “So for example if a micrometeorite were to hit a layer, it’ll only tear a little bit,” Ochs says. “It’ll hit a ripstop and it’ll stop.”

This level of durability is impressive, given how light a sample of the material feels. It almost seems like it could be blown away with a light breeze — a feeling reinforced by the fact that it looks like a silvery Mylar balloon from the grocery store.

Why the telescope needs to be so cold

Scientists will use the telescope to study infrared light emitted by distant planets and galaxies — and the infrared technology has to be kept absolutely frigid.

The temperature needs to be close to absolute zero, when molecules essentially stop moving. This extreme temperature is needed for the telescope’s scientific instruments to work correctly and to minimize infrared background “noise” — like heat from the sun — being picked up by the infrared sensors.

The telescope is picking up faint light emitted by distant galaxies that formed just after the Big Bang. The light visible to humans is just a fraction of the total range of light on the electromagnetic spectrum. By the time light from these far reaches of the universe approaches the telescope, it is in the infrared range of light, and no longer viewable to the naked eye.

“As light travels through the universe … the light waves elongate and it shifts into the infrared, which is heat,” explains Ochs. This process is known as cosmological redshifting. It occurs all the time, as the expanding universe stretches light.

Deploying the sunshield is going to be harrowing

Because the scientific instruments on the telescope need to be kept so cold to operate, the nearly $10 billion project hinges on the sunshield deploying correctly after launch. Right now, the telescope is folded up and packed away into a rocket in French Guiana. Soon, it will launch into space, hurtling to about a million miles away from earth, where it will orbit the sun. Just after it passes the moon — around three days after launch — scientists will begin remotely unfurling the frame of the sunshield.

“Probably the sunshield deployment is the toughest thing that we do,” says Ochs. “This is the one that we all worry about. You worry about all of them, but this is one that we probably worry the most about.”

The process is going to be tense and methodical. There are over 100 release mechanisms for the sunshield alone. Scientists will spend multiple days deploying it — which NASA says will be part of a “harrowing time.” The hope is that it will be proof that slow and steady really does win — and the prize could be unlocking the history of the universe.

After spending the last few years testing out hundreds of contingency procedures, Ochs’ big goal for deployment is to spend days feeling like he’s watching grass grow. “I’m hoping that we’ve paid our penance in the development and that when we get on orbit, that it will become boring.”

If the opposite happens, the telescope will be too far away to be serviced in-person. Any troubleshooting to get the James Webb Space Telescope deployment back on track will first be tested on the replica back here on Earth.