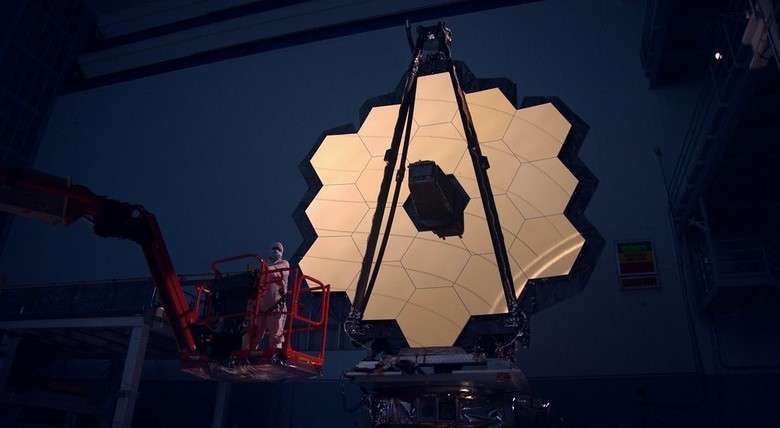 The James Webb Space Telescope's primary mirror is illuminated inside a darkened clean room. The entire telescope is now packed inside a rocket, awaiting launch.

When the rocket carrying the James Webb Space Telescope finally takes to the skies, it will be the culmination of decades of work by scientists and engineers who sometimes feared that the most powerful space telescope ever might never get off the ground.

The approximately $10 billion telescope, scheduled to launch as early as December 25, is designed to see light from the earliest galaxies to form after the Big Bang, and will let scientists study the atmospheres of planets that orbit distant stars, to search for signs of life.

But it’s been delayed so many times that some astronomers find it almost hard to believe that the launch is actually going to happen.

“It’s wild to think that this incredible observatory that we’ve all been looking forward to for years will be up and running soon,” says Megan Bedell, a researcher at the Flatiron Institute’s Center for Computational Astrophysics.

A giant telescope decades in the making

Planning for this telescope began over 30 years ago, before the venerable Hubble Space Telescope launched in 1990.

In the 1980’s, Garth Illingworth was the deputy director of the Space Telescope Science Institute in Baltimore. He recalls that his boss, Riccardo Giacconi, came in one morning and told him that it was time to start thinking about Hubble’s successor.

“I said, ‘Ah, no, we can’t do that! We’re all flat-out working on Hubble!'” says Illingworth, now at the University of California, Santa Cruz. “And he said, ‘Trust me, it’s going to take a long time.'”

Giacconi, who went on to win a Nobel Prize for his X-ray astronomy work, was absolutely right.

“We started out with a little group of like three people talking about this, and sketching concepts on bits of paper and then putting simple things in the rudimentary computers we had back in the ’80s,” says Illingworth. “You had to project into the future and ask, ‘What’s plausible and potentially feasible, but also takes us a huge step beyond our current telescopes?'”

A workshop was held in 1989, and in 1990 an expert review committee mentioned the idea of a large infrared, extremely cold telescope as a successor to Hubble. Planning work continued during the 1990’s, with the telescope getting its current name in 2002, to honor a former administrator of NASA. In 2004, construction began on certain portions of the telescope such as the primary mirror and science instruments.

The finished telescope that eventually emerged from all that work stands three stories tall and has a gold-plated mirror that’s 21 feet across. It has a sunshield the size of a tennis court, that will keep it a frigid minus 370 degrees Fahrenheit. The entire telescope is folded up like origami so it can fit inside a rocket, and will have to unfold itself out in space, traveling a million miles away from Earth.

“There may be a lot of experience launching other missions and surveillance satellites and all the rest, but nothing is like James Webb,” says Illingworth. “James Webb is unique. We’re doing one-off technologies here in many cases.”

A mission ‘haunted’ by cost pressures

Originally, the cost of the telescope was estimated to be only around $1 billion to $3.5 billion, and expected launch dates ranged from 2007 to 2011. That kind of budget just wasn’t realistic, given all of the unknowns and technology development that needed to be done, according to Illingworth. But he says there was real pressure at the time to keep costs down.

“That haunted the project for 8 years, and caused a lot of political anguish,” he says. The expected launch date kept being pushed back, and costs kept rising.

Things came to a head in 2011, when lawmakers in the House of Representatives voted to end what seemed like a money pit. Scientists and space enthusiasts rallied the troops to apply political pressure to save it. “We had teachers and school children writing, saying you know, Hubble’s been amazing, this is our future, we want this mission,” recalls Illingworth.

Astronomers feared that the project would be killed in the same way that the Superconducting Super Collider project for particle physics got cancelled in 1993, after work on the collider had begun and over a billion dollars had been spent.

But with the help of former senator Barbara Mikulski (D-Md.), who championed the telescope, Congress came to a deal and work continued, with a new launch date of 2018 at the earliest and what was supposed to be a development cost cap of $8 billion.

In 2018, the launch was yet again delayed until 2021, and an independent review board estimated that the total cost to support that new launch date was going to be $9.66 billion.

Over the years, some in the astronomy community have felt annoyed that so much of the science budget has gone to this one, giant project. The journal Nature referred to the James Webb Space Telescope as “the telescope that ate astronomy,” and in 2010 the journal Science noted that “a project intended to revolutionize astronomy now threatens to derail NASA’s entire space sciences program.”

“There were many people in the astronomy community who thought, ‘Let’s kill this. And then we’ll get the money for our missions,’ which was completely specious,” says Illingworth.

Now that it’s a done deal, however, astronomers around the world are just crossing their fingers and hoping that the telescope will launch safely and unfurl in space the way it’s supposed to.

“I can’t imagine that most of the astronomical community isn’t actually just waiting to see it launch and really, really hopes that it works,” says Lisa Storrie-Lombardi, the director of the Las Cumbres Observatory. “Because if it works, it will be a really spectacular scientific instrument.”

And even as they wait and hope and worry about this space telescope, the community is already talking about the next major one.

Last month, an expert committee convened by the independent National Academies of Sciences, Engineering, and Medicine recommended building a behemoth that’s optimized to study planets around distant stars to search for signs of life, which could launch in the 2040’s.