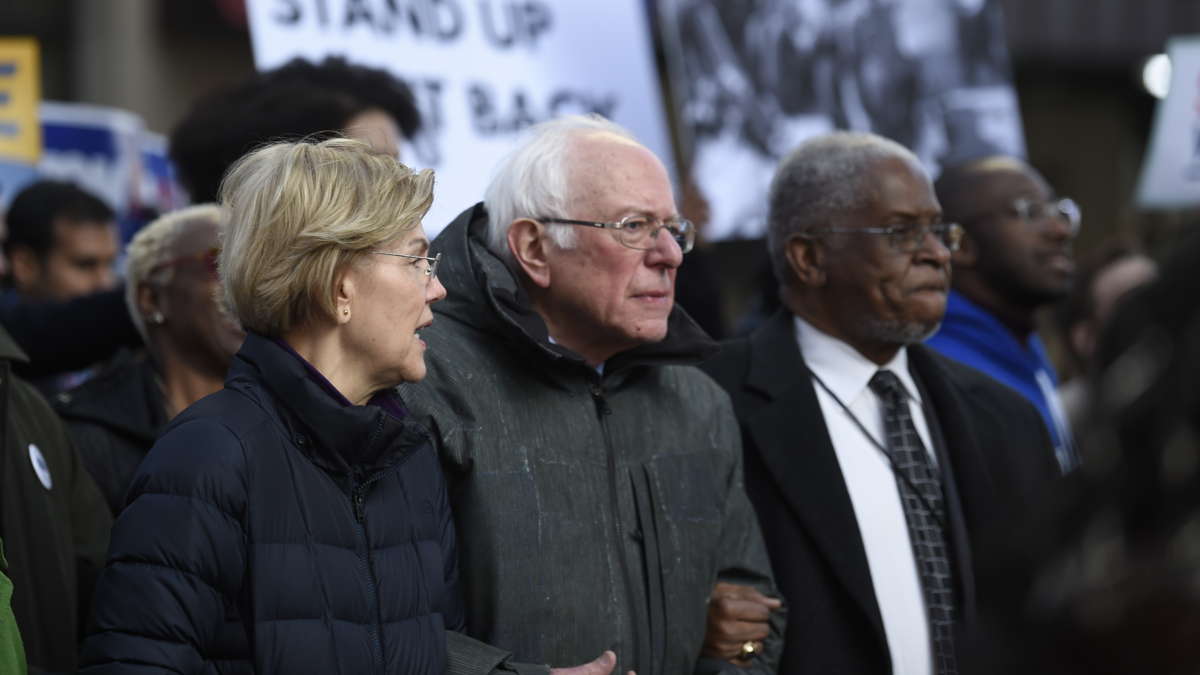 Last summer, when Elizabeth Warren was bringing out thousands of people at mega rallies who would wait long into the night in seemingly never-ending selfie lines, progressive groups were torn. They saw both Warren and her fellow presidential candidate Bernie Sanders as allies for their causes.

Sanders had inherited goodwill from his 2016 run against Hillary Clinton. But Warren was the charismatic star on late night TV who had fought the big banks during the recession, and, notably, the politician progressives had initially tried to draft into the 2016 primary as an opponent to Clinton before Sanders entered the race.

“Our members really wanted to see her run in that race,” explained Charles Chamberlain, chair of Democracy for America, one of the organisations that had helped spearhead the “Run, Warren, Run” movement in 2015. “We believed that she would have been a better candidate than Hillary Clinton.”

Chamberlain said the major change in the interim years was Sanders’ presidential bid in 2016.

“Bernie Sanders ran – in 2016 – an incredible campaign that won 23 contests, changed the narrative in this country about what is possible for progressives, and even moved the entire Democratic party to the left,” he said.

For much of the primary season, Chamberlain said, their members were split but as it became clear that Sanders was winning races and Warren couldn’t finish higher than third place, they decided to publicly back the Vermont senator.

“The guiding principle among our members was who is the best candidate to take on Donald Trump and who can win,” Chamberlain said.

The story of how and why the woman who was once lauded as the great progressive political hope lost the backing of a number of leading progressive groups explains part of why Warren’s campaign failed.

If Sanders had not run this year, they agree, they would have wholeheartedly backed Warren. Some groups made a point of insisting their endorsements were not because of anything Warren said or did, but because of Sanders’ credibility and consistency on issues like health care and climate change. They bristle at the suggestion of a single moment that led to their decisions, but they acknowledge a turning point that began in October when Freshman Rep. Alexandria Ocasio-Cortez endorsed Sanders. The Vermont senator’s support then accelerated into the winter as Warren was seen as backpedaling on a core issue — Medicare for All.

The first major progressive group to make an endorsement was the Working Families Party in September, and it chose Warren.

“Elizabeth Warren has been a personal hero to many WFP members,” the group’s director Maurice Mitchell said to an estimated 20,000-person crowd at a rally in New York City. “Her critique of the financial industry helped lay the groundwork for Occupy Wall Street.”

The Working Families Party’s decision sent a message to fellow progressives: don’t stay neutral in the primary, pick a side.

At the time, Warren was rising in the polls, and for a sliver of time, she even overtook Joe Biden as the national frontrunner. So, it seemed that both progressive organizations and voters would be split between Warren and Sanders.

But, ultimately, that’s not what happened.

“You started to see dominoes fall”

In October, three of the four members of the so-called congressional “squad” of progressives — Alexandria Ocasio-Cortez, Rashida Tlaib, and Ilhan Omar — decided to back Sanders in quick succession. These young, multi-racial women, some of the most outspoken progressive voices in Congress, had put their foot on the scale. And progressives around the country noticed.

“You started to see dominoes fall after that,” said George Goehl, the director of People’s Action, a coalition of progressive groups that says it represents an estimated 1 million people. The organization endorsed Sanders in December.

Also in December, the Center for Popular Democracy Action, another progressive coalition, backed Sanders. And then in January, the Sunrise Movement, a group of thousands of young climate activists, publicly backed Sanders.

They all pointed to the Vermont senator’s authenticity plus the unparalleled time and access he gave them. But, some of them also acknowledged a concern many Democrats have alluded to this cycle — electability.

“A lot of us believe Sen. Sanders is uniquely capable of winning and beating Trump,” said Goehl.

The battle to out-progressive Sanders

Warren fans often praised her trademark plans and her focus on policy. But, when it came to ideology, Sanders took those ideas further. Warren promised a two-cent wealth tax on people with a net worth over $50 million. Sanders upped her, and called for a 1% wealth tax on net worth above $32 million. Warren promised affordable child care. Then, Sanders, promised free child care.

“All the candidates [had] progressive stances, but Bernie’s tend to go furthest,” said Evan Weber, political director and co-founder of the Sunrise Movement. And that was a distinction many progressives noticed.

October was a tough month for Warren. She was repeatedly questioned by journalists and her opponents over the details of how she would pay for Medicare for All without raising middle class taxes. On Nov. 1 she put out a plan, but the more details she offered, the more compromising she appeared to progressive purists.

“Her sort of distancing herself from Medicare for All and when she thought she would be able to get it done — really, you know, distanced her from our folks,” said Natalia Salgado, political director with the Center for Popular Democracy Action.

One progressive activist NPR spoke with for this story is backing Sanders but acknowledged that Warren’s two-step plan on Medicare for All was the more realistic way to achieve universal coverage. Still, he said, she shouldn’t have compromised at the outset, because Republicans would chip away at it further. Democrats, he insisted, needed to be bold and uncompromising.

But in addition to health care, there was another key issue for progressives — immigration. It has increasingly become a pillar of the their agenda, especially under Donald Trump’s administration.

“The sort of defining factors for us between Bernie and Warren was his stance on a moratorium for deportations,” Salgado said. (In November, Sanders released an immigration plan calling for a moratorium on deportations. Around the same time, Warren said she was “open” to a moratorium. In February, Sanders’ campaign manager suggested their moratorium would have some exceptions, but by then, Sanders was already benefiting from being seen as the furthest left on this issue).

The struggle for Warren was that she could never seem to out-progressive the man who had come to define the movement after 2016.