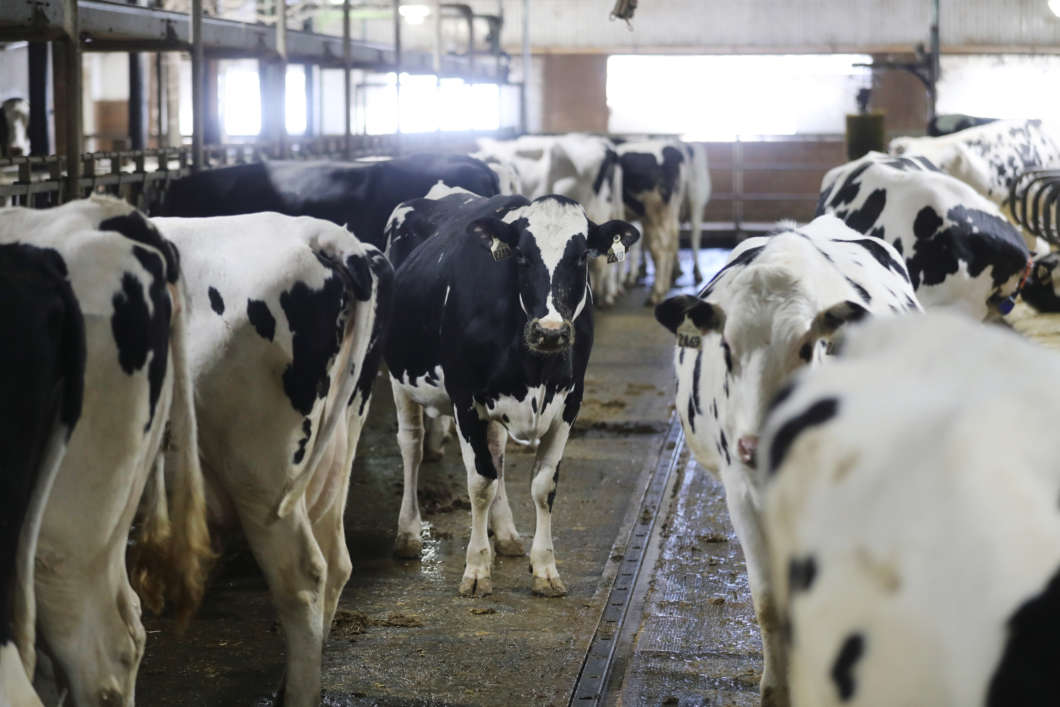 Cows stand in a pen at the Skyline Dairy farm near Grunthal, Manitoba, Canada, in March.
Image credit: Trevor Hagan

President Trump has railed against Canada for taking advantage of the U.S. when it comes to trade. A particular point of criticism is the dairy industry. Canada slaps steep tariffs on imports of milk, cheese and butter from the U.S., something Trump has called a “disgrace.”

Trump may not like it, but those tariffs are part of a politically sensitive, decades-old policy to protect Canada’s dairy farmers. The system is called “supply management” and it sets production quotas for the country’s dairy, poultry products and eggs.

“The stability of our system is of great benefit to not only farmers, but also all kinds of other businesses,” he says — like restaurants and trucking.

But other countries, including the U.S., see the system as protectionist, in large part because of the high tariffs Canada places on dairy imports. They range from 241 percent for milk (and more for dried milk) to 300 percent for butter, according to the Dairy Farmers of Ontario.

Those tariffs kick in after imports have reached a certain quota. In the case of the U.S., once it reaches its annual quota of 3,274 metric tons of butter to Canada, tariffs of 300 percent are applied.

President Trump has called the steep tariffs unfair. But Graham Lloyd, the CEO of Dairy Farmers of Ontario, says Canada’s supply management system wasn’t designed for Canadian dairy farmers to compete with the U.S. It’s intended only for domestic use.

“We’re not challenging them internationally … we don’t increase production with a view to saying, ‘let’s go and pursue a Mexican market’ or ‘let’s go in pursuit of a European market,'” he says. “It is designed for domestic consumption, so it’s a domestic policy.”

Lloyd notes that in recent years, the U.S. has had a trade surplus with Canada in dairy products.

The U.S. exported more than $600 million of dairy goods north of the border last year alone — more than four times the amount Canada sent to the U.S.

Trump is trying to protect dairy farmers in states like Wisconsin and New York, who have been hard-hit by low prices and overproduction. But dairyman Sherk says it’s not fair to blame Canada for a glut of U.S. milk.

“By somehow opening up the Canadian market to American producers, it is not going to solve their overproduction problem. … What they need to have is some way of controlling production, because the market just gets flooded,” he says.

It was the effort to reduce a constant surplus of Canadian milk during the 1950s and 1960s that led to the supply management system, says Al Mussell, an agricultural researcher at Agri-Food Economic Systems, an economic research organization in Guelph, Ontario.

“We found ourselves in a situation of chronic surplus, low prices, very low returns to farmers, just chronic agony,” he says. “We eventually stumbled on this idea that maybe we could use a quota to limit production.”

Supply management has enjoyed popular support from farmers in Canada over the years. Lloyd with the Dairy Farmers of Ontario says there has been no volatility in supply, and it’s helped keep small dairy farms in business. It has become an integral part of the economy, he says.

“I think what people need to understand, it’s more than an economic model. It’s not just a political policy. It’s a fabric of what this country is. It’s part of our strength of our rural economies,” he says.

The system is also politically sensitive. Dairy farmers are a powerful group, and many farms are located in heavily populated Ontario and Quebec. Maxime Bernier, a member of parliament, was reminded of that power recently, when he wanted to abolish the supply management system. He lost, by a whisker, his bid to lead the Conservative Party, says Gordon Ritchie, who served as Canada’s ambassador for trade negotiations in the 1980s.

“He lost — in his view, and in the view of most — largely because the dairy farmers mobilized a lot of votes to tilt the convention, the count against him,” he says.

Sylvain Charlebois, a professor in food distribution and policy at Dalhousie University, says Canada is the only industrialized country in the world that has such a system. Other countries, including New Zealand, South Korea and the U.K., got rid of their supply management policy years ago, in part to become more focused on exports. Charlebois says that puts Canada “on the defensive.”

Canada came under pressure in past years from negotiating partners involved in the Trans-Pacific Partnership (TPP). Stephen Harper, Trudeau’s predecessor as prime minister, agreed to undo supply management in exchange for entry to the TPP. When President Trump pulled out of the multilateral trade deal soon after taking office, the Canadians took supply management off the table.

Charlebois says if Canada wants to be taken seriously as a trading nation, it needs to rethink its supply management system — but abolishing it outright would create even more problems.

If that were to happen, “I would say within five years, Canada would lose most of its dairy farms,” he says. “It is losing, Canada is losing dairy farms already. But I would be surprised if any of the farmers would survive within five to 10 years, given how competitive Canadian farms are — they’re just not competitive, and dairy in particular.”