Why Native Americans Are Getting the COVID-19 Vaccines Faster 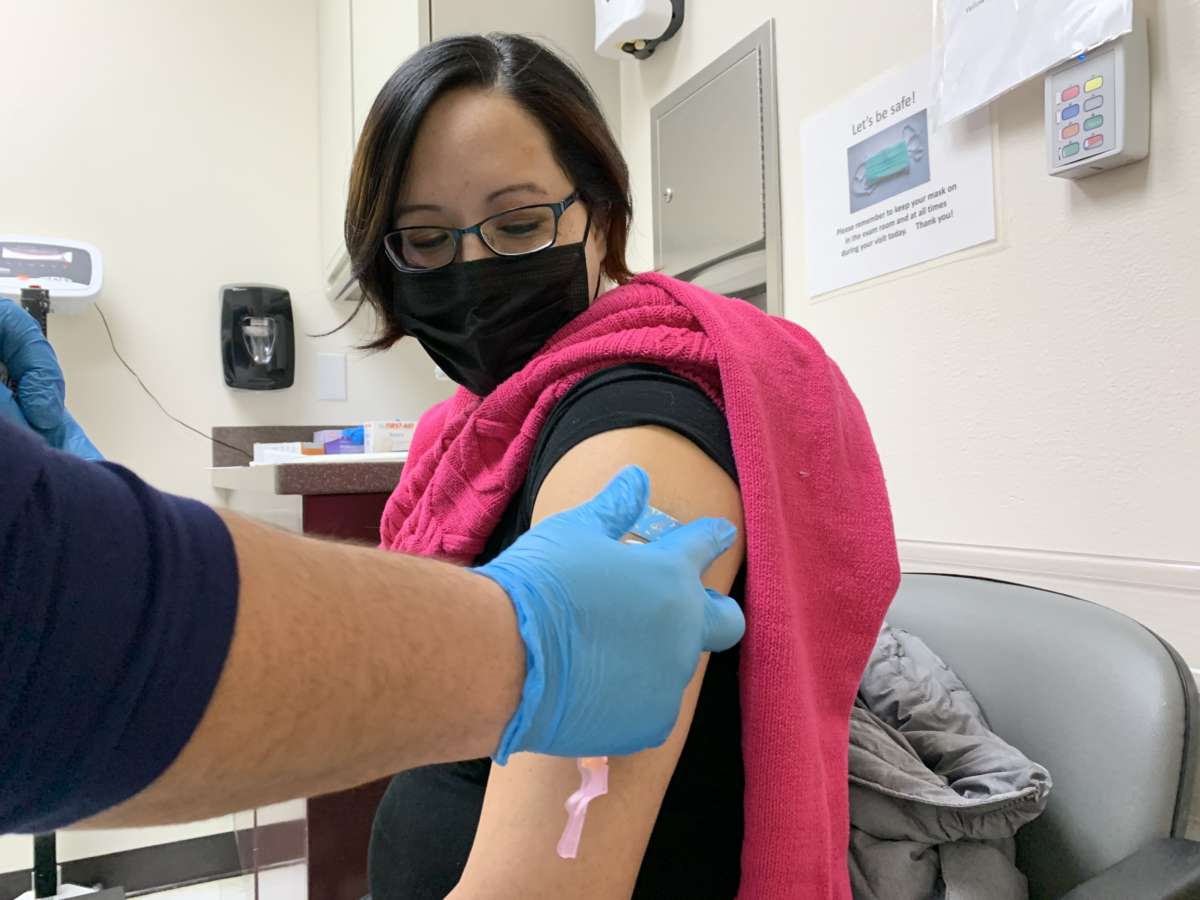 Amanda Bordeaux, 36, gets her second dose of the Pfizer vaccine during a weekly mass vaccination clinic at the Rosebud hospital in South Dakota.
Image credit: Kirk Siegler

“I really don’t know who to be mad at,” she said. “Who do I take my frustration to, how do I deal with it?”

Kills In Sight, an enrolled member of the Rosebud Sioux Tribe, is the first to say she’s not dealing with it well. She had been keeping her mom sheltered mostly in her home in the remote community of Spring Creek as the pandemic raged in South Dakota. But in September she broke her hip. Then in November she fell.

“I had to make a really hard decision to take her to the hospital because I didn’t know if there was anything broken,” Kills In Sight said.

Her mom in so much pain, she felt she had no choice but to take her to the doctor in Nebraska, then later the Indian Health Service hospital in nearby Rosebud, South Dakota. She’s not sure where they got infected, but they both ended up with COVID shortly after. Mom went downhill fast and ended up having to be airlifted to a larger hospital in Sioux Falls where she died two weeks later.

Kills In Sight is grieving and racked with guilt.

“I walk in the door and I don’t have nobody greeting me, nobody to talk to in Lakota,” she said. “And my kids, they’re cheated out of that. We’ve lost so many elders, a lot of Lakota speakers and what they took with them, we’re never going to get back.”

Twenty-five tribal members, mostly elders, have died from COVID so far on the isolated and long neglected Rosebud Reservation. Hundreds more here were sickened or had to be hospitalized. Everyone knows someone who has it or had it, or worse, died from it. Native Americans across the country have been disproportionately hit by the virus – dying at twice the rates as white people.

The arrival of the vaccines has offered the first real hope in months; a bright footnote after a lot of tragedy. While nationally the rollout of vaccines has been marked by stumbles and inequities, in Rosebud, distribution so far has been fast and efficient.

When the vaccines came online in December, Rosebud Sioux President Rodney Bordeaux faced a tough choice. He could either go through the state of South Dakota to get them, which in his view hasn’t taken the virus seriously enough, or go with the perennially underfunded IHS; the tribe has a still pending lawsuit over past appalling conditions at the local hospital.

“We were afraid, our people were a lot afraid,” Bordeaux said. “We didn’t have the resources, we thought we’d be getting left behind.”

After a lot of phone calls and lobbying, the tribe rolled the dice and went with the IHS anyway. And Bordeaux said it paid off. Recently the tribe has been vaccinating its communities at near double the rate of South Dakota. An analysis by NPR shows that Rosebud is not unique either. Across Indian Country, tribes are getting shots in peoples’ arms at far faster rates than US averages.

“We’ve even had non-Indian people from Sioux Falls and Omaha trying to get in here to get vaccinated because they can’t get it over there,” Bordeaux said.

On the Navajo Nation, nearly 21,000 members have been fully vaccinated since doses were released in mid-December, and over 100,000 Navajo have at least had one shot, said President Jonathan Nez.

“I couldn’t be [more] proud of how quickly the teams are getting shots into the arms of our Navajo citizens,” Nez told NPR.

Vaccination drives there are open to anyone over 18 years old; a contrast to surrounding Arizona communities still limiting appointments to those over 65. For the most part, tribal health departments that went with IHS distribution seem far ahead of those that went with state systems.

In Montana, the Confederated Salish and Kootenai tribes said that their health department was initially only allocated 200 doses a week by the state, though that number has risen recently. In contrast, the White Mountain Apache Tribe of Arizona has daily clinics which can accommodate 180 appointments per day, and the Cherokee Nation in Oklahoma estimated 10% of their population has been fully vaccinated so far. Both the White Mountain Apache and the Cherokee Nation went with the IHS.

In Rosebud, in partnership with the tribe, the IHS holds two mass vaccination clinics a week. One is a traveling clinic typically in outlying towns – about 11,000 people are scattered across the nearly 2,000 square mile reservation. The other is every Thursday at the Rosebud Hospital, which lately has been drawing crowds in the hundreds.

One recent bitter cold morning, Amanda Bordeaux, a paraprofessional at the high school, waited to get her second Pfizer shot.

“I worry about my family members,” she said, as a nurse poked her shoulder. “My aunt passed away from it and she was young.”

Bordeaux also lost her 91 year old grandmother from the virus in November.

“When I got my first dose I was a little bit angry because I wish it had been sooner for them,” Bordeaux said.

Analysts say it may not be perfect but the IHS is at least a centralized system. In Rosebud there’s an existing database of the some 15,000 people hospital officials are trying to reach during the vaccination campaign. Earlier in the pandemic, they set up an infrastructure for mass testing, so pivoting to vaccinations has gone relatively smoothly.

“It takes a lot of critical thinking in how we’re going to utilize this vaccine so we don’t waste it,” said Callie Raymond, who oversees nursing at the hospital.

Before the hospital got its own ultra cold storage unit, Raymond was driving 100 miles one way to the Pine Ridge Reservation to pick up the Pfizer shots. If they get no-shows for appointments, her team goes wherever they can to get shots in peoples’ arms. On Super Bowl Sunday, she even drove to a local supermarket with extra vials. They made an announcement and managed to get all the extra shots to shoppers.

Out of the close to 5,000 doses they’ve received so far, only three have been wasted, Raymond said.

Last Thursday, the temperature outside was six below zero. Ground blizzards had led to an emergency travel only advisory. Yet the tribe was still running its shuttles out to pick up people like Francine Little Hoop who had no other means to get to the clinic ten miles away.

“This is my first time, I wanted to get the shot,” Little Hoop said.

In the town of St. Francis, snow drifts covered the yard in front of Little Hoop’s home. It was one of only a few on this road that wasn’t boarded up – drug and alcohol abuse on the reservation is rampant and many families are often crowded in to dilapidated structures, easy conditions for the virus to spread.

“I just stay away from people, I only stay in my house,” Little Hoop said, her voice obscured by a thick mask.

Recently, Rosebud reported no new coronavirus cases for the first time in months. President Rodney Bordeaux said emphatically that it’s safer to be here than in much of the rest of South Dakota. For one, masks are required in all public places. Nightly curfews are still being enforced. And there are temperature checks at the entrance to every tribal building.

“Now we’re hearing of other strains coming so we really need to be vigilant,” Bordeaux said.

So far the vaccine supply pipeline is expected to remain relatively steady, unlike in many other jurisdictions in the country.

Bordeaux and other tribal leaders say they plan to keep holding the Biden administration accountable to the US government’s treaty obligations to deliver health care. There’s an obvious legacy of mistrust toward the federal government throughout Indian Country. That’s also played out when it comes to hesitancy towards the vaccines too, even though they’ve been proven safe.

“Most things they tell us have been studied for a long time, this has been rushed and that’s what puts the fear in a lot of people,” said Wayne Bear Shield.

Bear Shield, who works for the Rosebud tribe, was eager to show a large promotional banner he recently helped put up outside the headquarters. It reads: “Protect the RST, Protect the Circle… Get Vaccinated.” A similar one hangs at the hospital.

“I know a lot of people out there are scared but it’s something that we as people need to survive,” Bear Shield said.

Even before the pandemic, Todd County, South Dakota, where the Rosebud reservation is located, had the second lowest life expectancy in the nation. (only the neighboring Pine Ridge Reservation is worse). Health officials say high rates of diabetes, heart disease and other pre-existing conditions made tribes like this even more vulnerable during the pandemic.

Apart from her hip, Lila Kills In Sight’s mother was healthy and looking forward to many more years living with her family and passing down sacred Lakota traditions. She was one of five elders to die in Spring Creek, one of the few places here where Lakota is still widely spoken.

“My emotions have been really mixed because she was just about two months shy of the vaccine,” Kills In Sight said. “I think if we’d had the vaccine sooner, she’d still be here.”

Kills In Sight herself was initially hesitant to get the shots. She attributed that to survivor’s guilt. But she eventually decided it was what her mother would have wanted. Lately, she’s been helping pick up elders and others who need rides to get to the hospital for the vaccines.

“I’ve been so adamant about telling people, ‘take it, take it,’ we have to because that’s the only way it’s going to stop,” she said.