Why do we remember Trayvon? A grieving father and community effort for justice 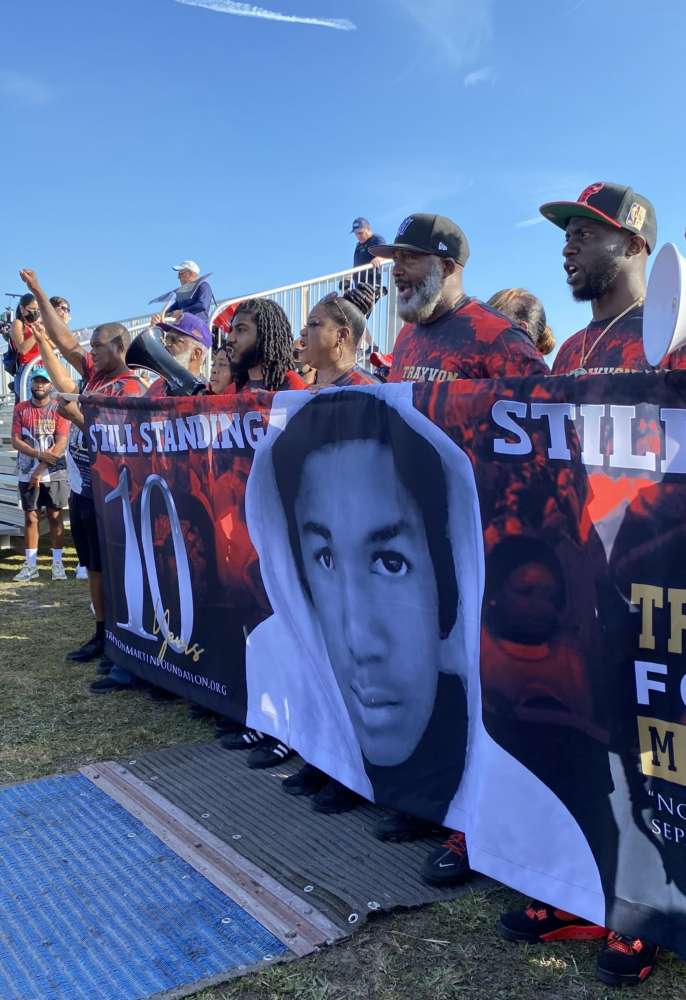 Tracy Martin (second from right) at a rally earlier this month in Miami. Photo by Joe Byrnes

SANFORD, Fla. _ Before Trayvon Martin represented a worldwide movement, he was a 17-year-old gunned down in the dark steps from his father’s home. He was coming back from the store with Skittles and iced tea and wearing a hoodie to guard against the rain.

The teen’s death generated four sentences the next day in the Orlando Sentinel. His name was not even included. The day after that the newspaper ran another short article identifying the teen, who was Black, but not his assailant, George Zimmerman, who was white and Hispanic. The newspaper said it was because Zimmerman had not been charged with a crime.

Trayvon’s story might have ended there, except for his father Tracy Martin who when he pressed the Sanford Police Department for more information about his son’s death felt rebuffed. This would set in motion a sequence of events that would culminate more than a month later with Zimmerman’s long-awaited arrest on a second-degree murder charge. And the world would remember Trayvon as a Black life that mattered.

“He became a part of our family,” said Velma Williams, then a Sanford city commissioner representing the historically Black community of Goldsboro. “Because we identified with him being one of our sons, one of our uncles, one of our cousins, one of our grandsons.”

“He became part of our family,” said Velma Williams, then a Sanford city commissioner representing the historically black community of Goldsboro. Photo by Amy Green

Sanford is situated some 27 miles outside of Orlando, and here racial tensions date back many decades. After the shooting Zimmerman, a neighborhood watch volunteer, was taken into custody but told officers he had acted in self-defense, and under Florida’s controversial “stand your ground” law he was released.

After speaking with Sanford police, Martin reached out to Turner Clayton, then-president of the NAACP in Seminole County. On behalf of the dead teen’s father, Clayton scheduled a meeting with Chief Bill Lee, but during the meeting the chief did not provide much more detail about what had happened, Clayton said. Clayton then contacted national leaders at the NAACP. Publicly, Sanford police said the investigation was continuing.

“We had to be the mouthpiece on (Trayvon’s) behalf, along with his parents,” Clayton said. “That’s why his name continues to live on today, because it’s about justice and receiving the same type of treatment that (anybody else) would have received.”

Meanwhile, Williams scheduled a meeting with local religious, civil rights and community leaders. Martin also reached out to Benjamin Crump, then a Tallahassee attorney perhaps best-known for representing Martin Lee Anderson, a 14-year-old who had died at a Panama City boot camp after guards were videotaped kicking, kneeing and dragging the teen around for more than 20 minutes. Martin held a news conference in Orlando where the bereaved father called for Zimmerman’s arrest in his son’s death. Martin said he did not feel justice had been served.

A few days later hundreds came together for a rally at the Allen Chapel AME Church in Sanford, and a few days after that some 1,500 gathered for a town hall meeting at the church. The little white church in the heart of Goldsboro would serve as a headquarters of sorts for what by now was a growing community effort for Zimmerman’s arrest.

“Everyone around here called it the civil rights church,” said Francis Oliver, a local historian. “The core of the meetings that we attended were, Why is this man not arrested?”

After concluding the investigation, Sanford police turned the case over to the state attorney’s office. Lee said detectives did not have enough evidence to arrest Zimmerman.

Then a series of 911 calls related to the shooting was made public, including one where cries for help could be heard followed by a gunshot. Who had made the cries was not known, but many believed it was Trayvon and took to social media to express grief and outrage about the teen’s death and the lack of any arrest, and Trayvon’s story spread.

Turner Clayton, then-president of the NAACP in Seminole County, has attended Allen Chapel AME Church in Goldsboro for some 40 years. Photo by Amy Green

Nearly a month after the shooting, and still with no arrest, thousands of demonstrators gathered at dusk at the waterfront Fort Mellon Park in Sanford to remember Trayvon and demand Zimmerman’s arrest. Trayvon’s mother Sybrina Fulton told the crowd, “Trayvon is your son,” laying bare for America the quiet fear many black mothers feel when their sons leave the house. The rally was led by local and national political and religious leaders including the Rev. Al Sharpton and mixed song and prayer with cries for political and social justice.

By now the controversy captivated the world. That same day Chief Lee said he would step down, and Gov. Rick Scott replaced the state attorney with a special prosecutor. The governor, a Republican, also appointed a task force to investigate the teen’s death.

The next day President Barack Obama said: “If I had a son, he’d look like Trayvon.” Williams said for the local Black community, here was a leader at the highest level of government “who is saying, ‘Gee, this should not have happened.’ Or, ‘Gee, I can feel the pain of those parents.'”

“He could have been one of my sons,” Clayton said. “Every time they leave the house they could be a Trayvon Martin. So that’s one reason why we keep this thing going, keep his name going. So that way, the younger people of today will actually know what happened to him, and what could happen to them under the same circumstances.”

Six weeks after the shooting Zimmerman was arrested and charged with second-degree murder. A jury would acquit him the next year. After the verdict a California woman wrote on Facebook about her grief. Her message was reposted on Twitter, along with a new hashtag: #BlackLivesMatter.