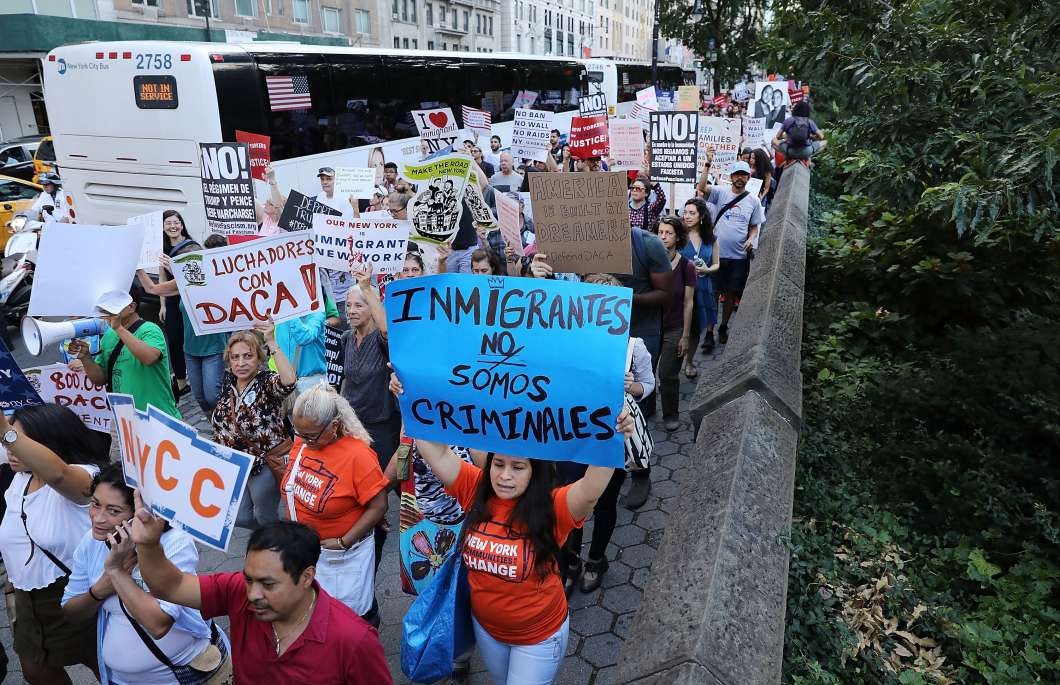 Hundreds of immigration advocates and supporters attend a rally and march to Trump Tower in support of the Deferred Action for Childhood Arrivals program, also known as DACA, on Wednesday in New York City.
Image credit: Spencer Platt

President Trump says the administration will have a decision about DACA, an Obama-era immigration policy, at some point over the Labor Day weekend — “latest will be Monday.”

As a presidential candidate, Trump pledged to “immediately terminate” DACA, the program that former President Barack Obama began five years ago to protect immigrants brought to the U.S. illegally as children.

But once in the White House, Trump took a softer stance.

“The DACA situation is a very, very — it’s a very difficult thing for me,” he said during a February 2017 news conference. He added, “You have some absolutely incredible kids — I would say mostly — they were brought here in such a way. It’s a very — It’s a very, very tough subject. We’re going to deal with DACA with heart.”

On Friday, when asked if DREAMers should be worried, Trump replied, “”We love the DREAMers. We love everybody.”

But the Deferred Action for Childhood Arrivals program is under threat with the administration facing a potential legal challenge over its future. Supporters fear the policy that has shielded hundreds of thousands of young immigrants from deportation could soon be phased out.

“We hear that the president is conflicted about it, and we hope that that is because there is a clear understanding that rescinding DACA is morally bankrupt because it would destroy the lives of youth who know no other country but this one as their own,” said Clarissa Martínez de Castro, deputy vice president of the Latino advocacy group UnidosUS.

Now a deadline is looming: Sept. 5. That is the date attorneys general from Texas and nine other Republican-led states are giving the Trump administration to answer an ultimatum: End the DACA program or face a legal challenge.

“Because it’s temporary, because it was based on an executive action taken by President Obama, it’s very vulnerable to a change,” said Frank Sharry, executive director of the immigration advocacy group America’s Voice.

DACA critics argue the policy represents executive overreach and, as a result, is unconstitutional.

“This is actually a program that helps advance the rule of law by having people come forward and be on the books and working just like everybody else,” said de Castro.

DACA allows some undocumented immigrants who arrived in the country as children to get renewable, two-year deferrals from deportation and work legally, so long as they are enrolled in or graduated from high school or college and pass a background check, among other things.

Luis Angel Aguilar, 29, applied for DACA protections in 2013. Aguilar was born in Mexico.

“My family crossed the border when I was about 10 or 11 years old in Arizona,” he said. “I crossed with my mom and my siblings.” Aguilar’s father had previously immigrated illegally and was deported roughly four years later.

Aguilar says that without the DACA policy, he fears he would be an immediate target for deportation because he doesn’t qualify for family-sponsored immigration or the program for high-skilled foreign workers.

“I think that’s one misconception that often gets told — that I can just apply for citizenship,” he said. “There’s no line, per se, for me to be able to get behind.”

Aguilar now lives in Virginia and works for an immigrant rights group.

Trump staffers have been weighing the options available to the president, but it’s not clear what Trump will do.

He could revoke the DACA participants’ work permits outright or gradually phase out the program by refusing new applicants and letting the current permits expire.

He could also choose to do nothing and refuse to defend the program in court.

Some White House officials have encouraged the president pursue another path: Strike a deal with Congress to enshrine DACA in law in exchange for funding for his long-promised southern border wall.

“Nobody wants to protect DREAMers at the expense of other groups of immigrants,” said Sharry. “Honestly, I think I think the real call is for President Trump to maintain DACA as is until Congress can act and enact a permanent solution.”

In an interview with Wisconsin talk radio WCLO on Friday, House Speaker Paul Ryan, R-Wis., says that he opposes the Trump administration ending DACA and that it is up to Congress to find a legislative fix to the question of what to do with the children brought to the United States illegally by their parents. The speaker said that Obama was wrong to act without Congress and that Trump should defer to Congress to fix the issue.

“Having said all of that there are people who are in limbo. These are kids who know no other country, who were brought here by their parents and don’t know another home,” Ryan said. “And so I really do believe there needs to be a legislative solution, that’s one that we’re working on, and I think we want to give people peace of mind.”

“It has not been finalized, and when it is, we will certainly let you know,” she said.

In the meantime, supporters of the DACA policy say they’re bracing for what comes next.