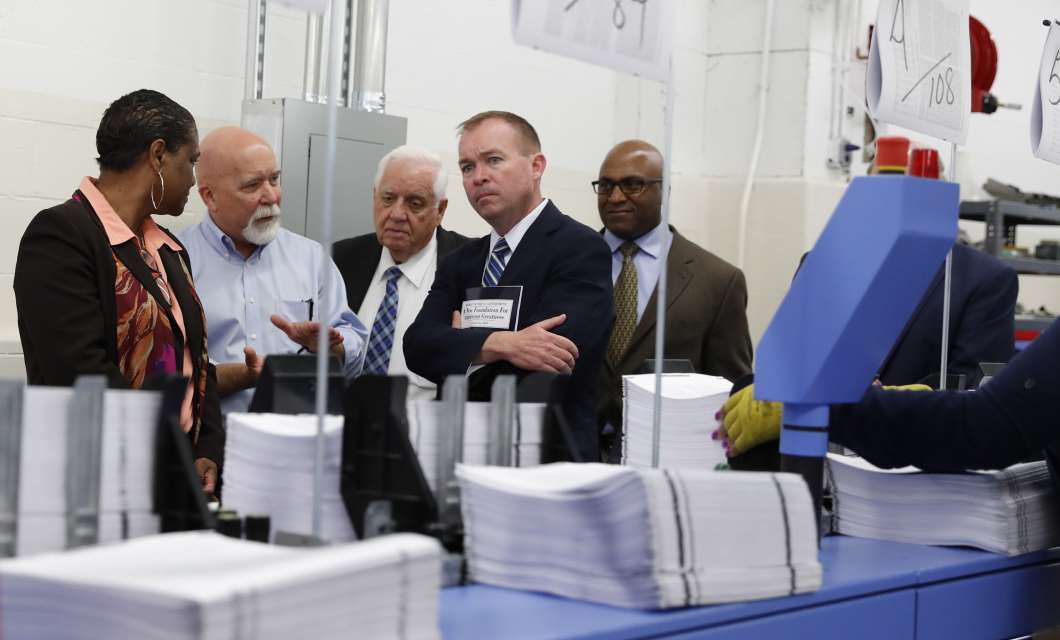 The Trump administration says it can balance the federal budget within a decade. Its blueprint calls for significant cuts to social safety net programs and assumes more robust economic growth.

The administration plans to release what it calls a “Taxpayer First” budget on Tuesday.

“This is, I think, the first time in a long time that an administration has written a budget through the eyes of the people who are actually paying the taxes,” White House Budget Director Mick Mulvaney told reporters on Monday.

The plan was crafted with a skeptical eye toward programs that serve the needy. Over a decade, it calls for hundreds of billions of dollars in cuts to Medicaid, food stamps and disability benefits.

“The president is essentially abandoning many people the economy has left behind — a large number of whom voted for him — and is pursuing policies that would make their lives more difficult than they already are,” said Robert Greenstein, president of the left-leaning Center on Budget and Policy Priorities.

Two months ago, the White House released a preliminary budget that covered only “discretionary” spending — those parts of the government that Congress has to authorize every year. The new budget also covers “mandatory” spending, including such big-ticket items as Medicare and Social Security.

Some of the proposed cuts to programs like Social Security’s disability benefits are designed to push more people into the workforce. With 10,000 baby boomers hitting retirement age each day, and an official unemployment rate of 4.4 percent, it would be difficult for the U.S. economy to grow as fast as the administration envisions without enlisting an army of new workers.

“We need folks to work,” Mulvaney said. “There’s a dignity to work. And there’s a necessity to work to help the country succeed.”

The budget assumes that annual economic growth accelerates from 1.6 percent last year to 3 percent by 2021, and remains at that level for the rest of the decade. Faster economic growth would generate trillions of dollars in additional revenue, allowing the government to balance its books by 2027.

Fiscal watchdogs say while the goal of a balanced budget might be commendable, they’re doubtful that it’s realistic.

“Given the demographic challenges that we face, there is really very little chance that we will be able to sustain 3 percent growth,” said Maya MacGuineas, president of the Committee for a Responsible Federal Budget. “We should be realistic about the projections we make and not use aggressive economic projections to try to wish our fiscal problems away.”

The budget does not call for big changes to the Social Security retirement program or Medicare, which Trump promised during the campaign to preserve. And while the president has proposed trillions of dollars in tax cuts — aimed mostly at the wealthy — the budget assumes tax revenues are largely unaffected.

“The Trump administration has taken so many important pieces of the budget off the table,” MacGuineas said. “They’re saying they won’t raise taxes. They’re going to increase defense spending. And they’re not going to address our biggest programs: Social Security and Medicare. And so when you’re trying to reach balance by relying on such a tiny sliver of the budget, it’s very difficult to make those numbers add up.”

The new budget incorporates Trump’s priorities from the earlier version, including increased spending on the military and border security, with corresponding cuts to the State Department and the EPA.

The plan also includes $200 billion over a decade as a down payment on infrastructure investment, and a modest $19 billion to establish a paid parental leave program. The president’s daughter, Ivanka Trump, has championed parental leave as a way to help women in the workforce, although the budget provides little detail of how the program would work.