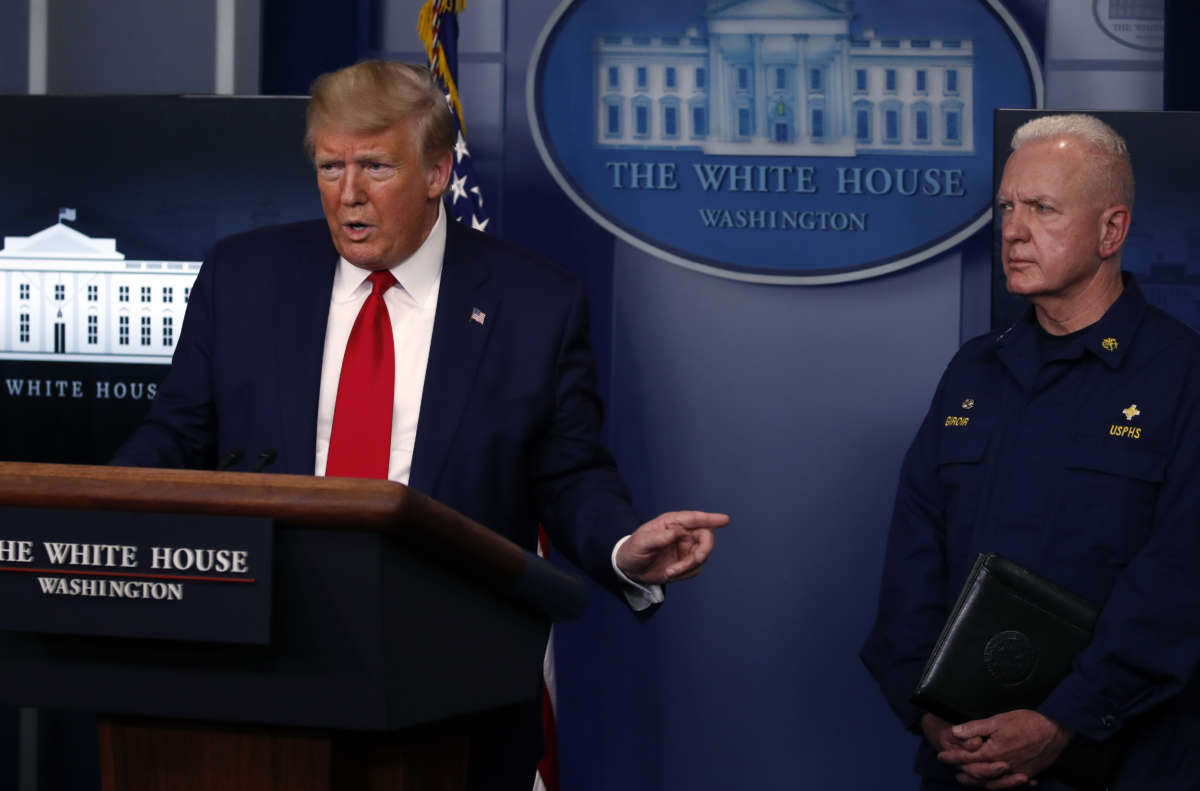 With more than 383,000 confirmed cases of the coronavirus in the United more than, and over 12,000 deaths, President Trump is continuing to ask Americans to maintain social distancing through the end of the month to help control the spread of the pandemic.

Trump has also demoted Glenn Fine, the head of the panel of federal watchdogs overseeing the administration’s management of the $2 trillion economic relief package. Fine will return to his position as the principal deputy inspector general at the Department of Defense.

Rep. Carolyn Maloney, D.-N.Y., who chairs the House Committee on Oversight and Reform, called Trump’s move a “blatant attempt to degrade the independence of Inspectors General who serve as checks against waste, fraud, and abuse.”

And acting Navy Secretary Thomas Modly resigned after deriding, and then firing, a ship commander who complained that thousands of crew members remained on board after cases of coronavirus were confirmed onboard.

During Monday’s coronavirus task force briefing, Dr. Anthony Fauci and Dr. Deborah Birx said Americans can help bring down earlier projections that suggested the crisis could bring a death toll between 100,000 and 200,000.

“If we work as hard as we can over the next several weeks, we will see potential to go under the numbers that were predicted by the models,” Birx said.

Birx explained for efforts to be successful, the public needs to comply with social distancing measures, including staying at home, avoiding large groups and being diligent with hand washing.

On a return to normal

Dr. Fauci cautioned Americans that a true return to normalcy is a ways away.

“If ‘back to normal’ means acting like there never was a coronavirus problem, I don’t think that’s going to happen until we do have a situation where you can completely protect the population,” Fauci said.

A vaccine for the novel coronvirus is likely more than a year away.

But Fauci stressed that doesn’t mean the strict social distancing measures will be in place until then.

“When we say getting back to normal, we mean something very different from what we’re going through right now, because right now we are in a very intense mitigation,” he said. “When we get back to normal, we will go back gradually to the point where we can function as a society.”

Dr. Fauci also noted in Monday’s briefing that New York Gov. Cuomo had reported a leveling off in the number of hospitalizations and intubations.

“That doesn’t mean we don’t have a lot of work to do,” Fauci said. “That tells me … we got there through mitigation. We cut off the stream of people who ultimately required hospitalization, required intubation, required all of the kinds of extreme methods.”

He also pointed to Washington and California as states that are also showing the positive results of strict mitigation measures.

Fauci echoed a call he’s made many times about social distancing: “Keep it up. Because this is going to get us out of it. This is our best and only great public health tool.”

Trump also said in Monday’s briefing that he had spoken to former Vice President (and current front-runner for the Democratic nomination) Joe Biden.

“We had a really wonderful, warm conversation. It was a very nice conversation,” Trump said.

Trump said the conversation focused on the coronavirus and lasted 15 minutes.

While Biden’s campaign said he had given suggestions on responding to the health crisis, Trump didn’t go into specifics.

“We agreed that we weren’t going to talk about what we said, but we had a very, very good talk,” Trump said.