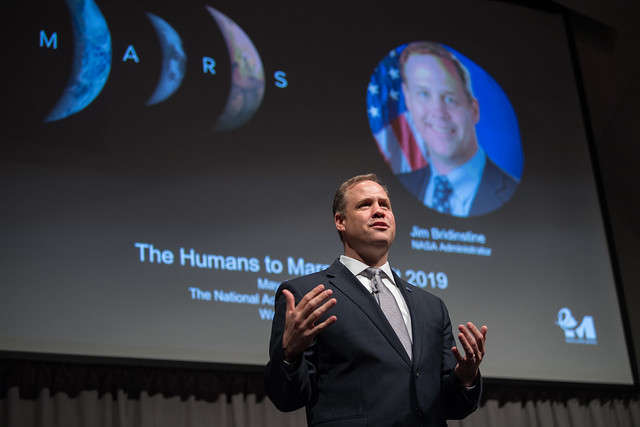 The Trump administration is seeking an additional $1.6 billion to fund a human mission to the moon. NASA is requesting the increase in next year’s budget.

The ask comes after Vice President Mike Pence charged the agency with landing humans on the moon by 2024 — more than 4 years sooner than previously planned. That came after the agency had already submitted a proposed budget of about $21 billion for FY2020.

President Trump announced the budget proposal in a series of tweets Monday. “Under my Administration, we are restoring NASA to greatness and we are going back to the Moon, then Mars,” he said.

Congress must approve the increase. “If congress comes in with a lower number, the probability of success goes down and the risk goes up,” said NASA administrator Jim Bridenstine.  “Can we do it? I don’t know. We have to look at that when it happens.”

The administration said it plans to fund the budget increase using a surplus from the Pell Grant fund which helps students with financial needs attend college. Enrollment in the program has declined since 2011, leading to a surplus of nearly $9 billion, according to the White House Office of Management and Budget.

Bridenstine said it’s good news the administration didn’t fund the moon landing mission by pulling money from other NASA programs. “We have now come out of the gate with a strong proposal. The administration did not take it from the science mission directorate or they didn’t take it from the International Space Station, which has been what cause these programs in the past to fail.”

He said the money is required to finish development of the agency’s SLS rocket, fund a new lunar lander to get astronaut to the surface and design new space suits for moon-walkers.