Where Do Florida Gubernatorial Candidates Stand On School Safety? 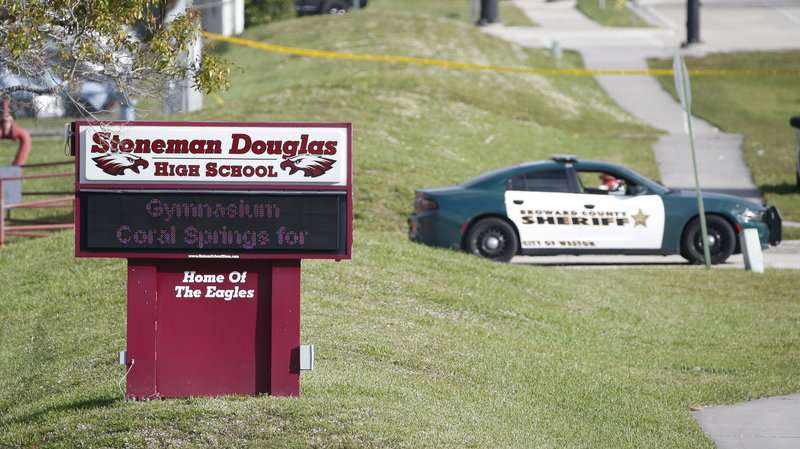 Law enforcement officers block off the entrance to Marjory Stoneman Douglas High School in Parkland, Fla., on Thursday. Nikolas Cruz has been charged with 17 counts of premeditated murder after Wednesday's attack on the school. Photo: Wilfredo Lee/AP

Democrat Jeff Greene’s campaign bus is pulling up to Jacksonville’s Northwestern Middle School. The Palm Beach billionaire has come to this low-income area to give backpacks to kids.

“We give people backpacks, that’s what the governor does,” says Greene.

He’s also giving out lime-green sunglasses with his name on the side.

“I’m going to make it even better and better for you kids, OK”

Greene’s in a crowded primary, asking for parents’ votes as the first new school year starts since February’s Parkland shooting.

“We’re going to have to lock down our schools, which means single-entry. You can’t have these open campuses like where I grew up as a kid,” says Greene.

On his bus wrapped with the phrase ‘Trump’s worst nightmare,’ Greene blames lobbying by the National Rifle Association for too many guns including assault weapons’ being on the streets.

“you have to have a real security person who’s a trained police officer type person at the front door and that’s not going to be some second-class guardian who tried to figure it out,” says Greene.

He’s referring to a new state law requiring schools to have either sworn officers or trained, armed guards, called guardians. Many school boards who didn’t want to use guardians are hiring them anyway because sworn officers cost too much.

“I thought that it was woefully inadequate for the moment that we now find ourselves,” says Gillum.

He says many parts of the law, like raising the age to buy a gun and banning bump stocks, should have been done anyway.

“I do think that it was a step, a movement in the right direction, but the fact is, is that we still have not addressed high-capacity magazines. We still have not addressed strengthening the background checks, closing the gun show loophole, making sure that individuals with domestic violence records and histories aren’t able to access these guns.”

All five Democrats are campaigning on banning assault weapons.

“The every kid fund for gun violence prevention…which would be a dedicated revenue source which would invest in the very best programs, initiatives and technologies to prevent everyday and mass-tragedy gun violence and it would do that by taking sales tax revenues from firearms and ammunition and it would add an additional 6 percent safety fee or what’s been called a bullet tax to ammunition,” says King.

Former congresswoman Gwen Graham is the Democratic frontrunner in recent polls. She says she supports the Second Amendment, but also calls for what she calls common sense gun safety, and she supports Parkland students who have mobilized around the issue.

“I don’t want any parent to ever have to drop his or her child off at school and worry am I going to pick my child up alive at the end of the day? I come at this from a mom’s perspective. I don’t want to politicize this issue, because if we politicize it, we lose what these students have started which is a movement and it’s not a movement that should be made political.”

And she agrees with former Miami Beach Mayor Philip Levine, who says local governments shouldn’t have to wait for state-level action.

“If I’m honored to be elected governor, I’m going to allow the local communities once again to be able to control their own local laws and regulations because they know what’s best for their communities,” says Levine.

“No one wants to take guns away but I could tell you one thing, we now have the weakest gun safety laws in the nation and if I’m honored to be elected governor we will have the safest gun regulations in the nation.”

He says if the Legislature won’t pass an assault weapons ban and better background checks, he’ll campaign for a public referendum.

Then there are the Republicans: state Agriculture Commissioner Adam Putnam and Congressman Ron DeSantis. Both strongly oppose banning an entire class of firearms, assault weapons.

DeSantis said during the last debate he’s mostly concerned about denying guns from “convicted felons, people who are mentally ill or dangerous to society”

And when it comes to keeping students safe, “what I think we need to do is secure our schools,” says DeSantis.

“The schools should not even be a target if you have adequate security. I think we should harness our retired military and law enforcement to be a part of the program so that the schools are taken off the table.”

As a dad with kids in school, Putnam says “school safety is a paramount importance to me, so is protecting our second amendment and the two are not mutually exclusive. You can protect the rights of law-abiding citizens without putting school safety at risk.”

And he says local police, schools, state agencies and the F-B-I should communicate better amongst themselves when someone presents red flags, like he says were missed before the February shooting in Parkland.

The Florida Primary is August 28.