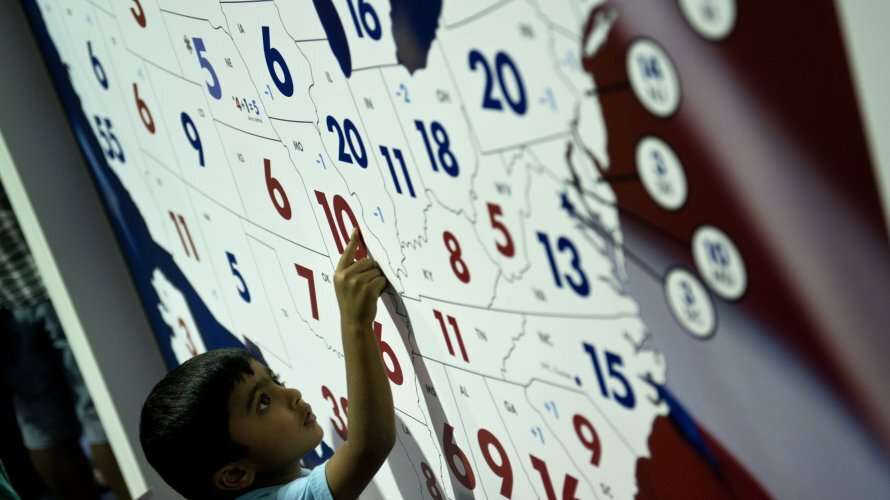 It takes 270 electoral votes to win the Presidency.

From the presidency to Congressional representatives to local races, there’s a lot at stake in the Nov. 3 election.

Because there has been a lot of confusing and often inaccurate information circulating, we thought it would be good to review some American election basics.

It Starts With Nominees

The primary and caucus system chooses thousands of delegates who meet at national conventions to officially nominate their party’s presidential candidate.

Former Vice President Joe Biden is the Democratic nominee, emerging from the primary/caucus season with 2,687 delegates (1,990 are needed). Incumbent President Donald Trump has secured the Republican nomination with all 2,550 delegates (1,276 are needed).

With far fewer delegates, there are also candidates running as nominees of independent or third parties, including the Green Party, the Libertarian Party and … the Birthday Party (candidate Kanye West).

Why the Electoral College

The Electoral College is a system that traces its roots back to the founding of our nation and the legacy of white supremacy.

Many of the founding fathers mistrusted direct democracy (“the tyranny of the majority,” according to Alexis de Tocqueville) and wanted Congress to choose the President.

Creating this layer between the popular vote and the final election was a compromise. It would ensure, as Alexander Hamilton wrote in the Federalist Papers, that the “sense of the people” was preserved while the selection was in the hands of “men most capable of analyzing the qualities adapted to the station.”

It takes 270 electoral votes to win the Presidency. Each state has the same number of electoral votes as it has members of Congress — 1 elector for each Congressperson, and 1 for each Senator. In addition, the District of Columbia has 3 electors. All states, except Maine and Nebraska, have a “winner-takes-all” policy in which all electoral votes are cast in that state for whomever wins the popular vote there. There are 538 electoral votes, with larger states having more electoral votes (California has 55, Alaska has 3).

How can this happen?

There has been a lot of political chatter about doing away with the Electoral College. Many believe it violates the one person-one vote mantra fundamental to American democracy. But doing so would mean states with less population would lose their electoral clout.,hanging the system would also require a Constitutional amendment — a messy, politically fraught process.

The Voting Process (The 2020 Pandemic version)

The pandemic has already impacted primary elections this year. Voting at the polls could mean exposure to the coronavirus; polling places have to adjust to take proper precautions.

This change is not without controversy — including from Trump himself — but bipartisanpolicy.org talked to three state and local election officials who say that vote-by-mail is not more subject to fraud than in-person voting.

Nearly all states already either allow mail-in voting options or have expanded those options and made them easier. Only eight states (Connecticut, New York, Indiana, Kentucky, Louisiana, Mississippi, South Carolina, and Texas) provide in-person voting as the only option. As of this writing, the coronavirus is NOT an accepted reason to request a mail-in ballot in those states.

Mail-in Ballot vs. Absentee Ballot: Traditionally, an absentee ballot is used to cast an absentee vote, usually by mail, by someone who can’t physically be present at a polling center on Election Day. In normal election years, that may be a college student who is living out-of-state, a member of the military or overseas voters.

A mail-in ballot is currently used in at least 34 states to some degree. Mail-in ballots are either requested by the voter, or, in some states, automatically sent to all registered voters. The ballots are mailed back by the voter or deposited at a polling location by a certain time on or before election day. Absentee voting is one form of mail-in voting, but the terms are often used interchangeably.

Be Prepared For Anything

There are many different scenarios in 2020 that could cause a massive dysfunction in America’s democracy.

Millions are expected to vote-by-mail for the first time – but as states are racing to update voting systems and expand mail-in vote options, few have procedures and technologies in place to ensure that millions of mail-in ballots can be received and counted. Georgia expanded mail-in ballots for its June primary, and the results were disastrous. Florida’s primary in mid-August was overall uneventful.

Many states will count mail-in ballots if they are postmarked on Election Day. That means vote tallying could last well beyond November 3, sowing confusion and concern. Mail delays or late-mailed ballots may result in thousands of ballots being disqualified and votes not counted.

In-person polling places will still be available in most states, but there’s a dire shortage of poll workers nationwide.

Finally, there is concern that should Trump lose, he will not concede the election, leading to drawn-out fight in the courts.