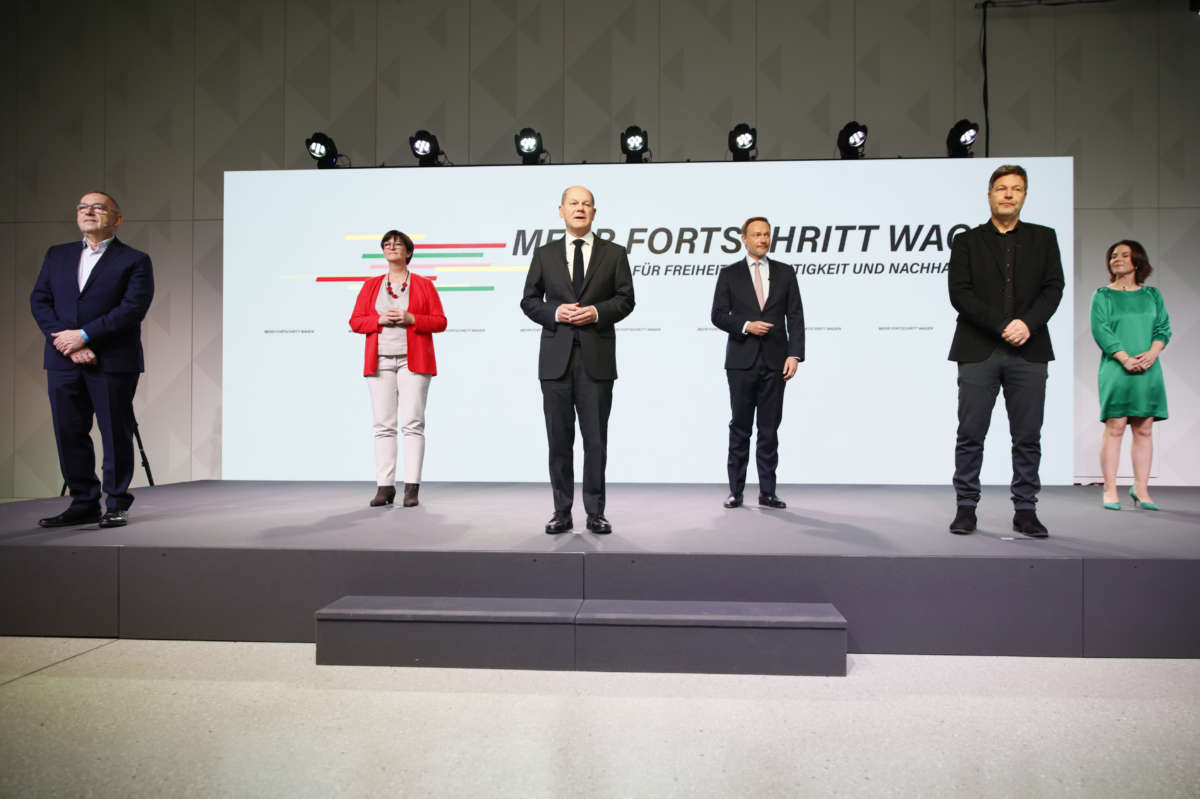 Olaf Scholz (center) and Saskia Esken (second left) of the Social Democrats, Annalena Baerbock (right) and Robert Habeck (second right) of the Greens and Christian Lindner (third right) of the Free Democrats pose for photos after signing a coalition agreement between the three parties on Tuesday in Berlin.
Image credit: Carsten Koall

BERLIN — Olaf Scholz is scheduled to be sworn in as Germany’s chancellor on Wednesday, marking the end of Angela Merkel’s 16-year tenure.

Scholz’s center-left Social Democratic Party, which won the most votes in September’s federal election, will govern along with the Greens and the libertarian Free Democratic Party.

In recent days, each party has approved a coalition agreement that lays out government objectives, including raising the minimum wage to 12 euros/hour ($13.50), phasing out coal-fired power plants by 2030 and a pledge for the country to go carbon neutral by 2045. And Scholz has announced members of cabinet that include politicians from the three parties.

Here are some of the keys to understanding the transition underway in this major European power.

Who is Olaf Scholz?

Scholz is a 63-year-old career politician in the center-left Social Democratic Party. For decades, he has held a wide range of posts: member of parliament, mayor of the port city of Hamburg, labor minister and finance minister in coalition governments under Merkel. He’s a known quantity who has a deep understanding of the political process and how to get things done, and because of that, he’s often been compared to President Biden.

One of the reasons he and his party prevailed in the federal election is that in Scholz, Germans see a continuation of Merkel’s governing style: Scholz is a calm, steady hand in a crisis and a pragmatic leader who strives for compromise.

But there are a few key differences between them. “Angela Merkel grew up in the east of Germany in the GDR. She has a different outlook, particularly on foreign policy and on European policy,” says Marcel Fratzscher, president of the German Institute for Economic Research. Under a Scholz-led government, Fratzscher thinks Germany will be more aligned with the United States on the world stage and seek a more assertive, unified European Union.

At a news conference on Tuesday, Scholz emphasized these goals. “The trans-Atlantic relationship and our cooperation as part of NATO remain steadfast,” he said. “We commit to a community of democracies across the globe and I am very grateful to President Biden for emphasizing the importance of multilateralism and at the same time, we are committed to what unites particular nations: the idea of freedom, the rule of law, democracy and respect for human rights.”

A whole new administration is being sworn in. How will it be different?

Let’s start with the biggest challenge: the pandemic. Germany’s daily coronavirus infection rate has reached an all-time high, and there was a lot of talk about whom Scholz would choose as health minister. In the end, he chose Karl Lauterbach, an epidemiologist and Social Democratic politician who criticized the Merkel administration’s handling of the pandemic. Lauterbach argues that the government needs implement stricter guidelines, he advocates for making COVID-19 vaccinations mandatory and has little patience for those who refuse to get vaccinated. He is a polarizing figure in a country where about 30% of the population is unvaccinated, so the selection sets the way for a potential political fallout.

Yet Scholz named him anyway — a sign that the incoming chancellor wants an outspoken leader to be managing this pandemic, not someone who would be seen as a politically safe choice.

Another interesting fact about this new cabinet is that all the ministries in charge of national and international security and diplomacy are headed by women, some for the first time. The Greens’ Annalena Baerbock will be foreign minister, while Social Democrats Nancy Faeser and Christine Lambrecht will be interior minister and defense minister respectively. In fact, eight of the 16 cabinet members will be women.

In another milestone, the Greens’ Cem Ozdemir will be agriculture minister, becoming the first German cabinet member of Turkish descent.

What will be the biggest challenges facing Germany’s new government?

The first will be governing Germany’s way out of the depths of the pandemic. Scholz emerged from last week’s meeting with outgoing Chancellor Merkel and the premiers of the 16 federal states with a new slate of COVID-19 guidelines — rules that have suddenly made it far more difficult for the unvaccinated to maneuver through society. Following through on these guidelines while convincing — or forcing — more than 18 million unvaccinated Germans to get vaccinated will be a strong test of Scholz’s leadership.

Another challenge will be to transform the economy to a greener, more digitized version of its current state, and doing so without raising taxes or putting Germany into debt, a concern of the incoming finance minister, Christian Lindner, head of the Free Democratic Party. And it’ll be crucial for this new administration to show it can govern as a unified coalition, making the economy more competitive, not only improving people’s lives, but also lessening its impact on the planet, a top concern particularly for the Greens.

Perhaps one of the biggest challenges for Scholz, though, will be managing the political differences among the coalition partner parties. Each brings its own agenda, and ensuring that everyone stays relatively happy could be one of Scholz’s biggest headaches.