Biden And Putin End Their Meeting Early, With Press Conferences Coming Up Next 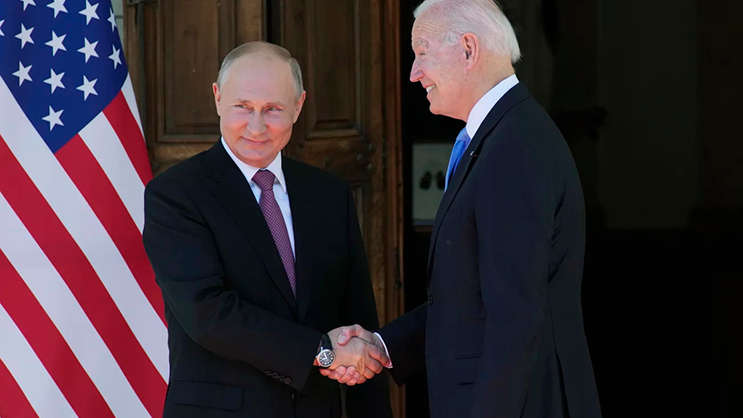 “It’s always better to meet face to face,” Biden said as reporters crowded into the book-lined room where the leaders will meet.

For the initial part of the meeting, which lasted 90 minutes, the two men were joined by just one top aide each, Secretary of State Antony Blinken and Russian Foreign Minister Sergey Lavrov. It was then opened up to a larger circle of aides.

“The U.S. and Russian relations have a lot of issues,” Putin said through a translator. “I hope that our meeting will be productive.”

The Russian president slouched in his chair for what became an extended and raucous photo op, with journalists jockeying for position. Biden sat up straight in his seat, positioned several feet away from Putin.

NPR’s Franco Ordoñez, who is among the reporters traveling with Biden, described a chaotic scene, with the pool of journalists traveling with the U.S. president initially barred from entry to the room. There was a lot of pushing and yelling, and at one point, Ordoñez says, a U.S. official tried to pull him through the scrum and into the room but “another non-U.S. security agent grabbed me and threw me back.”

Eventually, a few U.S. journalists were able to get into the room and get a view of the two leaders, but the pushing and shoving by security officials and Russian media never stopped.

Earlier Biden and Putin shook hands outdoors at the entrance to Villa La Grange, lingering on the handshake long enough for photographers to capture the moment. It was the start of the first formal meeting between the leaders of the two nations in three years, a stretch in which U.S.-Russian relations have grown increasingly strained.

What’s on the table

Aides say Biden isn’t there to make friends or build trust with a rival he describes as “bright,” “tough” and “a worthy adversary.” There’s much on the U.S. agenda — from recent ransomware attacks perpetrated by Russian cybercriminals and the air piracy in Belarus to arms control and climate change. There are concerns to be voiced about human rights abuses, strongman tactics against opposition leaders and the imprisonment of two Americans.

The last meeting between Putin and President Donald Trump ended with the now-infamous Helsinki press conference at which Trump sided with the Russian leader over U.S. intelligence agencies (a stance that Trump later tried to backtrack).

There won’t be a repeat of that scene this time, not least because Biden and Putin won’t be holding a joint press conference after their meeting. Aides say the meeting is expected to last four to five hours but won’t include a meal, “no breaking of bread,” a senior administration official told reporters.

In the lead-up to the summit, Biden refused to say what he hopes to get out of the meeting, what he intends to push Putin on or what success would look like, saying it wouldn’t make sense to negotiate in the press.

“I will tell you this: I’m going to make clear to President Putin that there are areas where we can cooperate, if he chooses,” Biden said in a press conference Monday. “And if he chooses not to cooperate and acts in a way that he has in the past, relative to cybersecurity and some other activities, then we will respond. We will respond in kind.”

Biden met Putin when he was vice president, and he has openly criticized the Russian leader, once calling him a “killer.” Asked about those comments in an NBC interview ahead of the summit, Putin laughed it off. He also downplayed hacking concerns as he has with other cyber intrusions blamed on Russia.

Biden told reporters he didn’t want to have a joint press conference with Putin to avoid breathless analysis of body language.

But the lack of a joint press conference does mean that Biden won’t have to stand next to Putin with an open mic. Instead, in a highly choreographed sequence of events, Putin will hold his press conference first. Then Biden will take questions from reporters. This setup will allow the American president to characterize the meeting and, if necessary, counter the narrative unspooled by Putin.

What Republicans are saying

As the meeting was getting underway, the Republican National Committee sent out a statement criticizing Biden for inviting Putin to meet.

Danielle Alvarez, the communications director for the RNC, said in the statement that the meeting was a win that “Biden has handed Russia.”

“The American people deserve a leader who prioritizes our interests and holds bad actors accountable,” she said.

There has been a long-standing tradition of refraining from criticizing a president while on an overseas trip, but that practice has gradually eroded. Republicans have been preparing to portray Biden as weak, regardless of how the meeting goes. U.S. presidents going back to George W. Bush have all met with Putin during their time in office.

During the Trump administration, Democrats and even many Republicans criticized Trump for meeting with North Korea’s president, Kim Jong Un, without preconditions.