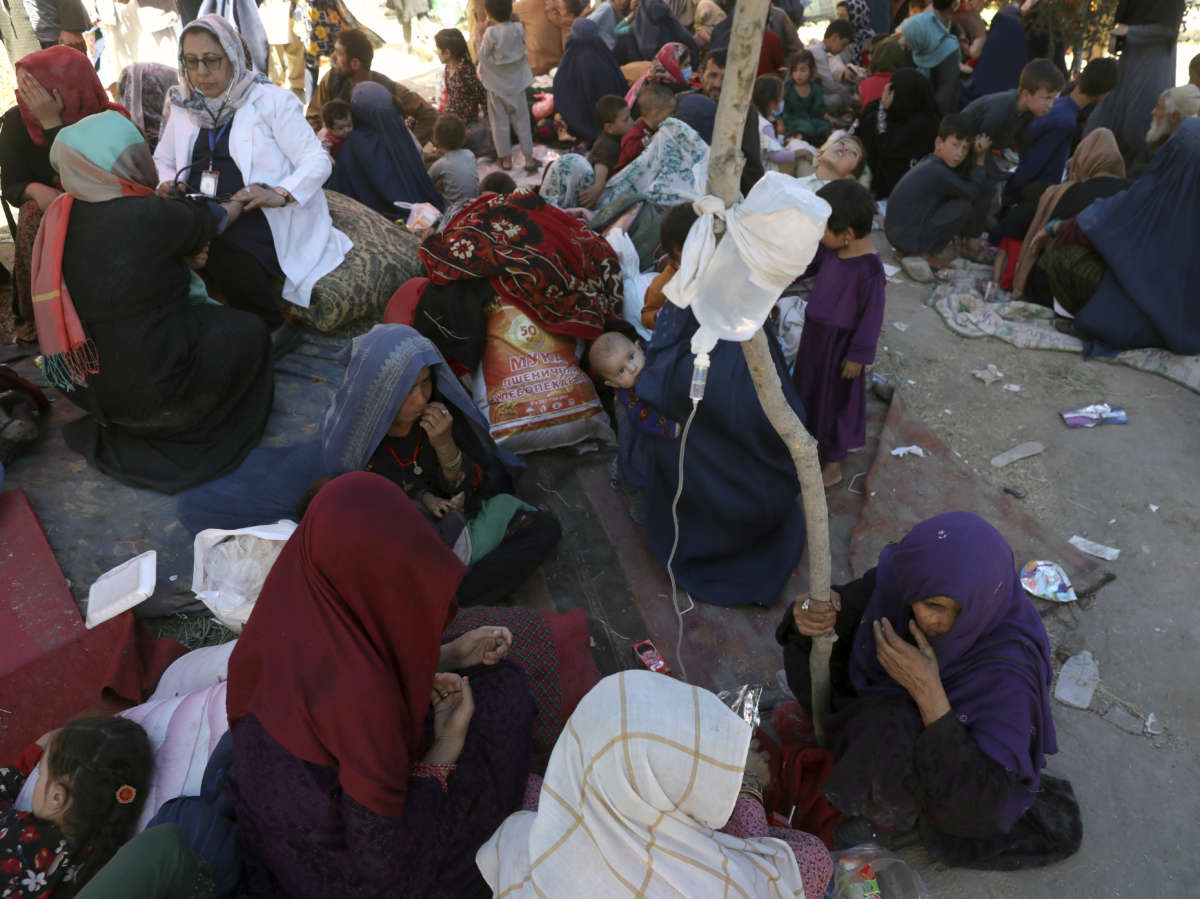 Internally displaced Afghan women from northern provinces, who fled their home due to fighting between the Taliban and Afghan security personnel, receive medical care in a public park in Kabul last Tuesday.
Image credit: Rahmat Gul

For women in Afghanistan, the Taliban takeover of the country puts their rights at stake, as well as their lives.

When the Taliban last held power between 1996 and 2001, women were denied education and employment opportunities. Girls couldn’t attend school and women could only be seen in public with a male escort and their bodies fully covered. Punishment for disobeying these strict rules was severe, ranging from beating to execution.

Since 2001, women’s rights have increased in Afghanistan. More girls have been enrolled in school and mortality rates among children have decreased. With the Taliban coming into power once again, however, that progress could quickly disappear.

80% of the nearly 250,000 people in Afghanistan who have been forced to flee their homes since the end of May have been women and children, according to Shabia Mantoo, a spokesperson for the U.N. refugee agency. A report released last month from the U.N. also showed that the number of women and children killed and injured increased in May and June, around the same time U.S. and other international troops moved foreword with withdrawing their remaining troops from Afghanistan.

“Please spare a thought for the people women and girls of Afghanistan. A tragedy unfolds in front of our eyes,” said Phumzile Mlambo, the executive director of UN Women.

Across the world, women’s advocacy organizations are voicing their pleas to protect Afghan women and spreading the word about how to help.

Women for Women International, a nonprofit humanitarian organization that provides support to female survivors of war, tweeted that they are collecting donations to help women find safe places to meet and ways to stay connected. While doing so, the organization is also attempting to maintain the safety of its own team.

“We’re closely monitoring the situation unfolding in #Afghanistan. Our team is safe. They are very sad, but calm, and sheltering in place,” the organization said. “Whatever happens in the coming days, we hold true to the idea that women can and should help shape the future of Afghanistan. Our international community of supporters matters now more than ever.”

Georgetown Institute for Women, Peace and Security is also spreading the word about how to donate.

The institute’s director, Melanne Verveer, co-authored an op-ed in The Washington Post calling on the U.S. government to do more to protect Afghan women. She and her co-author, Tanya Henderson of Mina’s List, called on the U.S. to charter direct evacuation flights for Afghan women activists and fund relocation efforts with money the Biden administration appropriated for Afghan refugees.

“It is a perilous moment for Afghan women and girls,” the institute wrote on its website. “Every day, the Taliban is gaining ground, assassinating women leaders, attacking girls at school, and rolling back women’s rights in the process. We are running out of time to prevent the worst from happening.”

Josie Fischels is an intern on NPR’s New Desk.