What We’re Reading About The Past Week Of Protests 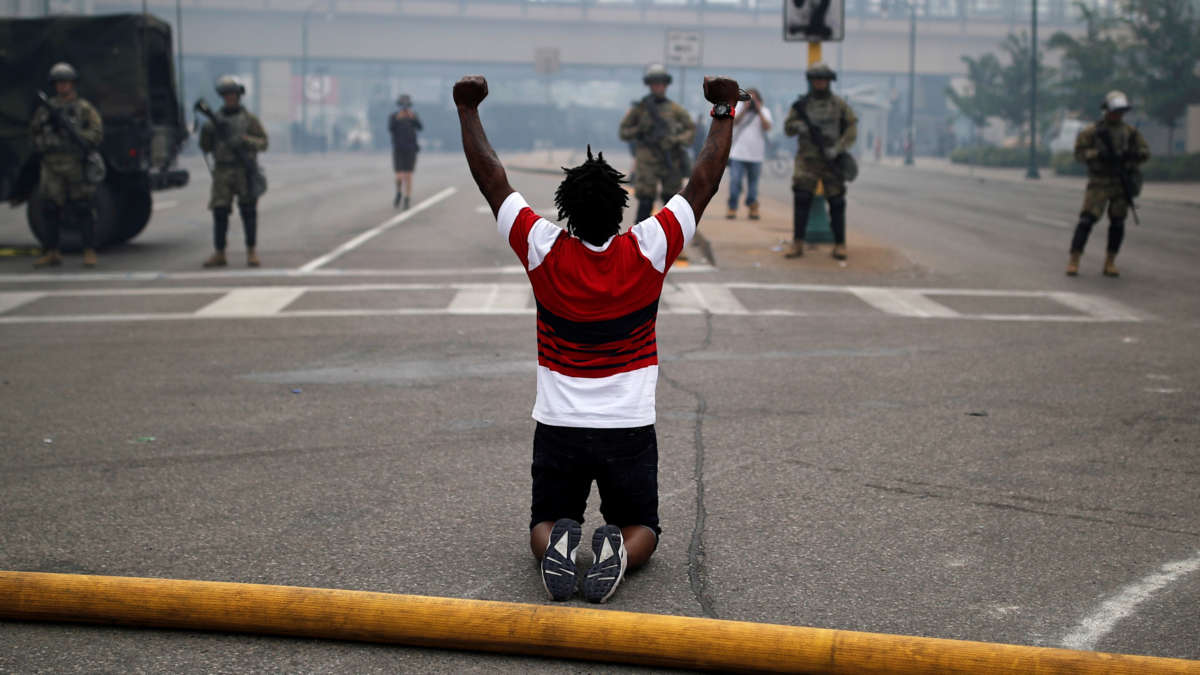 A man kneels as he confronts National Guard members guarding the area in the aftermath of a protest in Minneapolis, Minn.
Image credit: Carlos Barria

If you’ve been trying to keep up with news about the nationwide protests against police brutality, the stream of stories can be overwhelming. In the days following George Floyd’s homicide at the hands of Minneapolis police, reporters have been covering the protests in more than 140 cities across the country, trying to make sense of this tumultuous moment.

Here are some of the most illuminating stories that we’ve read this week to help us understand how we got here, and the larger issues driving the protests.

In The Boston Review, Elizabeth Stinton relates the current protests in Minneapolis to the ones that followed the deaths of Clark and Castile. She also looks at the nationwide unrest that followed the assassination of Martin Luther King Jr. in 1968. Similar to the uprisings that took place over half a century ago, she writes, Minneapolis residents are fed up with the “buildup of unanswered grievances and the lack of concrete changes to their immediate living conditions.”

“Rather than responding to violent political rebellion with policy—such as addressing mass unemployment, failing public schools, and inhumane housing conditions—policymakers and officials, from Richard Nixon’s War on Crime to the bipartisan War on Drugs to Donald Trump’s embrace of ‘Law and Order’ politics, have consistently sought to manage the material consequences of socioeconomic problems (e.g., urban decay and drug abuse) with more police, more surveillance, and, eventually, more incarceration. We as a nation still fail to reckon with the wisdom King prophetically offered toward the end of his life: that only ‘social justice and progress are the absolute guarantors of riot prevention. There is no other answer. Constructive social change will bring certain tranquility; evasions will merely encourage turmoil.'”

Over at Slate, Joel Anderson writes that while many police chiefs are condemning the excessive use of force by the police officer who killed Floyd, it’s important to pay attention to what police are doing during protests:

“The initial response of police leaders may have felt like progress, but video footage of police and protesters clashing in the streets reveals the truth: Officers are much closer to what we see in viral videos documenting their brutality than in the well-intentioned words of their leaders. Despite the shift in public statements, police haven’t changed since the protests of 2014 and 2015.”

Many protesters, including journalists, have captured police on tape pointing guns, shooting rubber bullets and tear gas at them. Michael Dessam compiled a list at Slate of the ways police incited violence: “Police all over the country tear-gassed protesters, drove vehicles through crowds, opened fire with nonlethal rounds on journalists or people on their own property, and in at least one instance, pushed over an elderly man who was walking away with a cane.”

The COVID-19 pandemic is still raging during the protests, and as we’ve reported, black people are dying from the virus at disproportionate rates. And as Annelisa Merelli at Quartz writes, police brutality is also a public health crisis that affects black people at a much higher rate than others:

“To give a sense of the magnitude of the crisis, the APHA reported that in 2016 alone (the latest year for which the organization could get reliable data, in itself a telling sign of the lack of priority accorded to the issue) at least 1,019 people were killed due to police intervention, and 76,440 were injured. This resulted in nearly 55,000 years of life lost, and had a large price tag, too: Police brutality costs $1.8 billion per year, according to the Centers for Disease Control’s most recently available data (2010).”

Many argue that these two crises for the black community—police brutality and the coronavirus—aren’t independent of each other. In fact, in both cases the extent of the death toll stems from systematic discrimination, and in both cases, the solution may require a deep rethinking of the overall system.

In The Atlantic, Ibram X. Kendi examines a 1896 document by a statistician that says black people were naturally selected for disease and death, and would gradually become extinct. Kendi goes on to write that “too many Americans have been waiting for black extinction since Hoffman,” and that black Americans are “living in a nightmare” rather than the elusive American Dream:

Our NPR colleague Leila Fadel wrote about a Somali immigrant, Safia Munye, who opened a restaurant in Minneapolis more than two years ago—only to close her doors due to COVID-19. However, the community rallied behind her business and raised more than $180,000 to re-open this weekend—that is, until it was burned down during the protests. But despite her loss, Munye says she wants justice for George Floyd and change for Minneapolis.

“‘My heart is broken. My mind is broken,’ she says. ‘I know I can’t come back from this. But this can be replaced. George’s life cannot. George’s life was more important. That man that got killed in the most inhumane way. I hope he gets justice.'”

And The New York Times brought us another story about resilience and solidarity, about a Bangaldeshi family in Minneapolis who also lost their restaurant after it was burned down during one of the protests. Yet they support the uprising, and even opened the restaurant’s doors as a medical haven for protesters.

” ‘We were just trying to do what we could to help our community,’ said [Hafsa] Islam, who helped treat wounded protesters. ‘Sure, we had our business. Sure, we were trying to keep our kitchen open. But more than anything, we were concerned for our people.’

“The tension in [Ruhel] Islam’s adopted city reminds him of his childhood in Bangladesh, when he lived through a dictatorship. Two of his fellow students were killed by the police, he said. ‘We grew up in a traumatic police state, so I am familiar with this type of situation,’ he said.”

To find more of the stories we’re following right now, make sure to subscribe to our newsletter to receive this week’s edition about the protests unfolding across the nation.