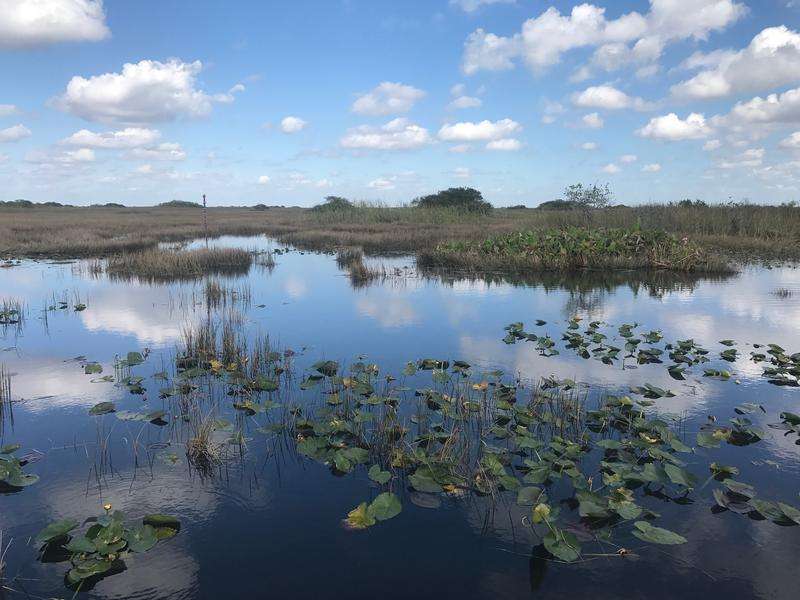 Let’s start with what we’re losing:

One of the most biologically diverse places on Earth, from sawgrass to cypress trees, apple snails to alligators. The historic home of Florida’s Miccosukee and Seminole tribes. A national park.

The ecosystem that ensures fresh drinking water for more than 8 million Floridians.

Everglades advocate Marjory Stoneman Douglas talked about all this in an interview in 1983.

“It was a marvelous expanse of flat green land with its strangeness and its openness and its birds,” she said. “So utterly unique, you see. There is nothing like it anywhere else in the world.”

More than 30 years later, Wayne Rassner stands knee-deep in a pool of water in a cypress dome in Everglades National Park. He’s a volunteer guide, a canoeing enthusiast and the head of the South Florida National Parks Trust. He takes people into the park so they can learn about the challenges the Everglades face.

And so they can see its beauty firsthand.

“We don’t have a giant waterfall or an enormous canyon or snow-covered mountains,” Rassner says. “We have a very subtle beauty.”

To get here, Rassner drove several miles from the park’s Ernest Coe Visitors Center in Homestead. He parked along a quiet two-lane road. He walked about a quarter-mile more into the swamp.

But even out here, the sound of cars and planes is inescapable.

“Which at first bothered me,” Rassner says. “And then I realized, no, that’s OK. That’s a good thing because it brings people in here to learn about the environment.”

Is it, though? Talk with Everglades Foundation ecologist Steve Davis, and you’ll get the sense more people in the environment is exactly the opposite of what the Everglades needs.

“We’ve lost 50 percent of the ecosystem that we’re not going to get back,” says Davis. That’s largely because of development: towns like Weston, Belle Glade and Okeechobee were built into the natural Everglades. But rising seas are advancing into Florida Bay, killing off the marshes at the Everglades’ southernmost point. And water management issues — a lack of fresh water flowing south, contaminants in waterways — also have contributed to the Everglades’ decline.

These are some of the problems the Comprehensive Everglades Restoration Plan (CERP) hopes to address. In December 2000, on the same day the Supreme Court decided Bush v. Gore, Florida Gov. Jeb Bush and President Bill Clinton signed the multi-decade, $17 billion dollar plan.

CERP is the biggest project of its kind in the world. And it’s supposed to be finished in the mid-2030s. But only six of 68 projects are underway.

“At this pace,” Davis says, “it’s going to take a half-century or more to finish.”

On a bright February morning, Davis has just jumped off an airboat into a water conservation area about forty miles west of Miami. He’s standing in thigh-deep water and holding a slimy glob of periphyton, a freshwater mix of algae and other gunky particles.

“It’s one of our best indicators of water quality,” he says. “When phosphorus levels get above about 10 parts per billion, which is the protective threshold we know for the Everglades… this periphyton will start to really break apart.”

Looking at the brownish glob, Davis says cleaning phosphorus from the water is going well here. That’s thanks in part to large man-made wetlands called stormwater treatment areas. Six of them just below Lake Okeechobee filter out contaminants just as the natural Everglades once did.

“With restoration, some would… think there’s less of the hand of man involved with the management of the system,” Davis says. “That’s not going to be the case.”

In fact, more levees, canals, dikes and pumps are what’s needed, says Julie Hill-Gabriel of Audubon Florida. That’s the only way to both help the Everglades resume their natural flow and ensure fresh water and flood control for millions of people.

After all, you can’t just kick people out of Weston, Okeechobee and Belle Glade, tear down the Herbert Hoover Dike and let water take back the land.

And even if we tried, “science says that’s actually not even enough storage,” Hill-Gabriel says. “So that’s really not the goal of Everglades restoration.”

So what is the goal?

“To try to replicate as best we can what nature had,” Hill-Gabriel says. Davis agrees, but says that even in the best-case scenario, the restoration plan’s impact might be hard to notice.

“The Everglades would be a little bit wetter in the dry season. That would result in a huge benefit,” he says. “We’d see improvement in fisheries; we’d see improvements in things like crocodiles and roseate spoonbills and other animals — things we know have declined.”

The trouble is, we’re nowhere near the best-case scenario for restoration. Rising seas are pushing their way into marshes and the Biscayne Aquifer under the southeastern Everglades. The South Florida Water Management District and farmers in central Florida are facing off with Florida Senate President Joe Negron and various environmental groups over whether to expedite construction of a water storage reservoir south of Lake Okeechobee. President Donald Trump is expected to cut funding to the Environmental Protection Agency and the Department of the Interior — two of the federal agencies involved in overseeing the plan.

And CERP itself seems to have stalled. Seventeen years after it was rolled out, when it should be halfway done, exactly zero of its 68 projects are complete.