What We Know About The Victims Of The Atlanta-Area Shootings 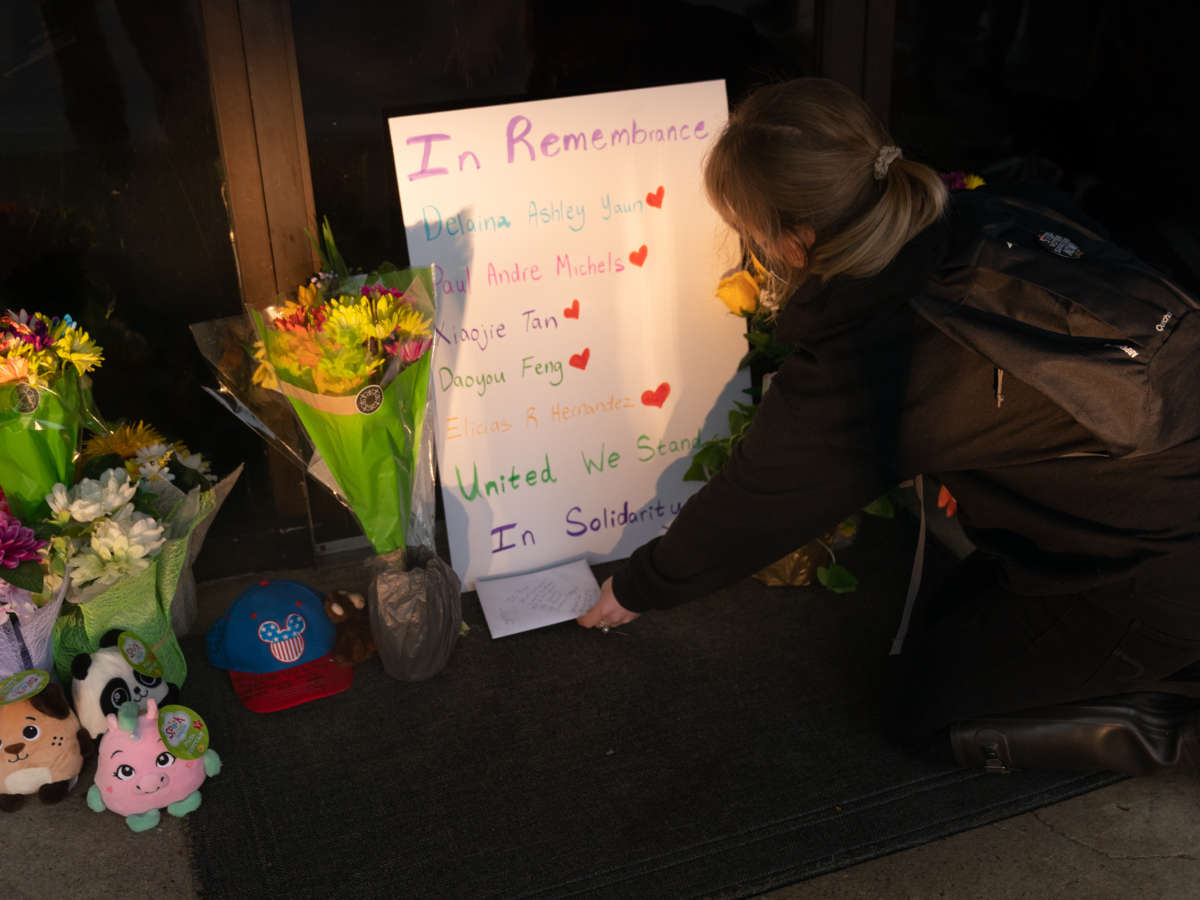 Shelby Swan places a sign outside Young's Asian Massage, where four people were shot and killed this week in Acworth, Ga. Another four people were fatally shot at two massage businesses in Atlanta, but authorities have not released their names.
Image credit: Elijah Nouvelage

As the country reels from the Atlanta-area massage business shootings that left eight people dead, including six women of Asian descent, authorities have released the names of those killed in the first of Tuesday’s three attacks.

Police in Atlanta have not yet named the four female victims of the shootings in that city, which targeted two spas across the street from each other. Seoul’s Ministry of Foreign Affairs said on Wednesday that four of those killed in the attacks were of Korean descent, The Korea Herald reports.

The suspect, 21-year-old Robert Aaron Long of Georgia, was arrested within hours of the attacks and faces charges of murder and assault. The Cherokee County Sheriff’s Office said Wednesday that Long confessed to the shootings but claimed they were not motivated by racial animus — prompting widespread debate over what constitutes a hate crime and how to present the gunman’s explanation, especially in the context of a recent nationwide surge in violence against Asian Americans.

The group Stop AAPI Hate tracked 3,795 “hate incidents” against the Asian American community between last March and the end of Feb. 2021, according to a report released Tuesday. Those incidents include verbal harassment and physical attacks, and are likely a vast undercount, the group said. Women of Asian descent reported 2.3 times more incidents of violence than men.

As the nation mourns and calls for change, details are beginning to emerge about some of the victims of Tuesday’s attacks. NPR will update this page as more information about the victims becomes available.

Yaun and her husband, Mario Gonzalez, were getting a couples massage after work on Tuesday at Youngs Asian Massage when the attack started, family members told Fox 5 in Atlanta. They were first-time customers of the establishment.

Gonzalez, who reportedly was able to make out of the spa safely, told an Atlanta CBS affiliate that they were in separate rooms when the shooting started.

Yaun leaves behind a 13-year-old son and an infant daughter, the station reported, as well as her mother and siblings.

“He took mothers, families away that didn’t deserve this,” Yaun’s mother, Margaret Rushing, told Fox 5. “They’re innocent, they did nothing wrong. And I just don’t understand why he took my daughter.”

Yaun worked as a Waffle House cook, according to her Facebook profile.

John Beck, Yaun’s manager of three years who grew close with her family, told BuzzFeed News that she would feed diners who were homeless, and bring them home to offer them showers and clean clothes.

“Her heart was so big,” Beck said. “She loved people and she loved her children, she was a very, very special person to me.”

Yaun and Gonzalez married in 2020, according to Beck, who added, “she got pregnant out of nowhere, got married, blessing after blessing, she was so happy.”

In a Facebook post identifying herself as Yaun’s cousin, Cristy Lynn McGouirk called her a “great role model,” praising her strong will and “heart of gold, kindness, and pure love.”

“You were an amazing Mother, Sister, Daughter, Aunt, Grandaughter, Cousin, & best friend that anyone could have asked for,” she wrote. “Your legacy lives on, you have touched so many peoples lives, you were one of the most dedicated women I have ever known.”

Michels was a U.S. Army infantry veteran who had been married for more than two decades and owned an electric company, family members told The Daily Beast. They described him as a “staunch Republican,” a gun owner and a baptized Roman Catholic.

Michels told The New York Times that Paul, one of nine siblings, grew up in southwest Detroit and relocated to Georgia about 25 years ago for work.

“My brother was a very hard-working, loving man,” he said.

Paul was interested in getting into the massage business himself, he said, and had been looking into owning establishments.

Tan was the registered owner of Youngs Asian Massage, according to public records.

She is also listed as the owner of Wang’s Feet & Body Massage about 7 miles away in Kennesaw, which she promoted in posts on her personal Facebook page.

Tan has held cosmetology licenses in Florida and Georgia since 2008, and was board certified as a massage therapist in Georgia in 2016.

Tan, who was known by friends as Emily, emigrated to the U.S. from China and had an adult daughter who recently graduated from the University of Georgia, friend and client Greg Hynson told USA Today.

“She was the sweetest person you’d ever meet,” he said, adding that when he came to the spa for an appointment on his birthday last year, Tan greeted him with a cake.

Flor Gonzalez told The Washington Post that her husband of 10 years, who was injured in the attack, called her immediately after being shot “steps away” from Youngs Asian Massage.

She believes Hernandez-Ortiz, who works as a mechanic and owns an auto repair shop, may have been heading to a shop next door to send money to his parents in Guatemala when he was caught in the gunfire.

He was shot “in the forehead down to his lungs and into his stomach,” according to a GoFundMe page set up by Gonzalez. In it, she wrote that he remains hospitalized in intensive care and will need facial surgery.

“Please pray for my family and the family’s that were affected by this shooting,” she wrote.

Gonzalez was able to visit her husband after midnight on Tuesday, and told The New York Times that she urged him to keep fighting. She reminded him that they had been planning to celebrate their daughter’s 10th birthday next week, and described him as “a dedicated father, very loving.”

Gonzalez told the Post that there is at least one bullet inside Hernandez-Ortiz’s stomach, which is currently too risky for doctors to remove, but that doctors have said there are positive signs that he will recover.

She praised his resilience, noting that he arrived from Guatemala a decade ago and worked his way up to opening his own business.

“He came from nothing and has come a long way; that is why I have faith he will survive this,” she said. “He is strong and optimistic, and that should help him get through this.”