What We Know About The Situation In Haiti, 4 Days After The Massive Earthquake 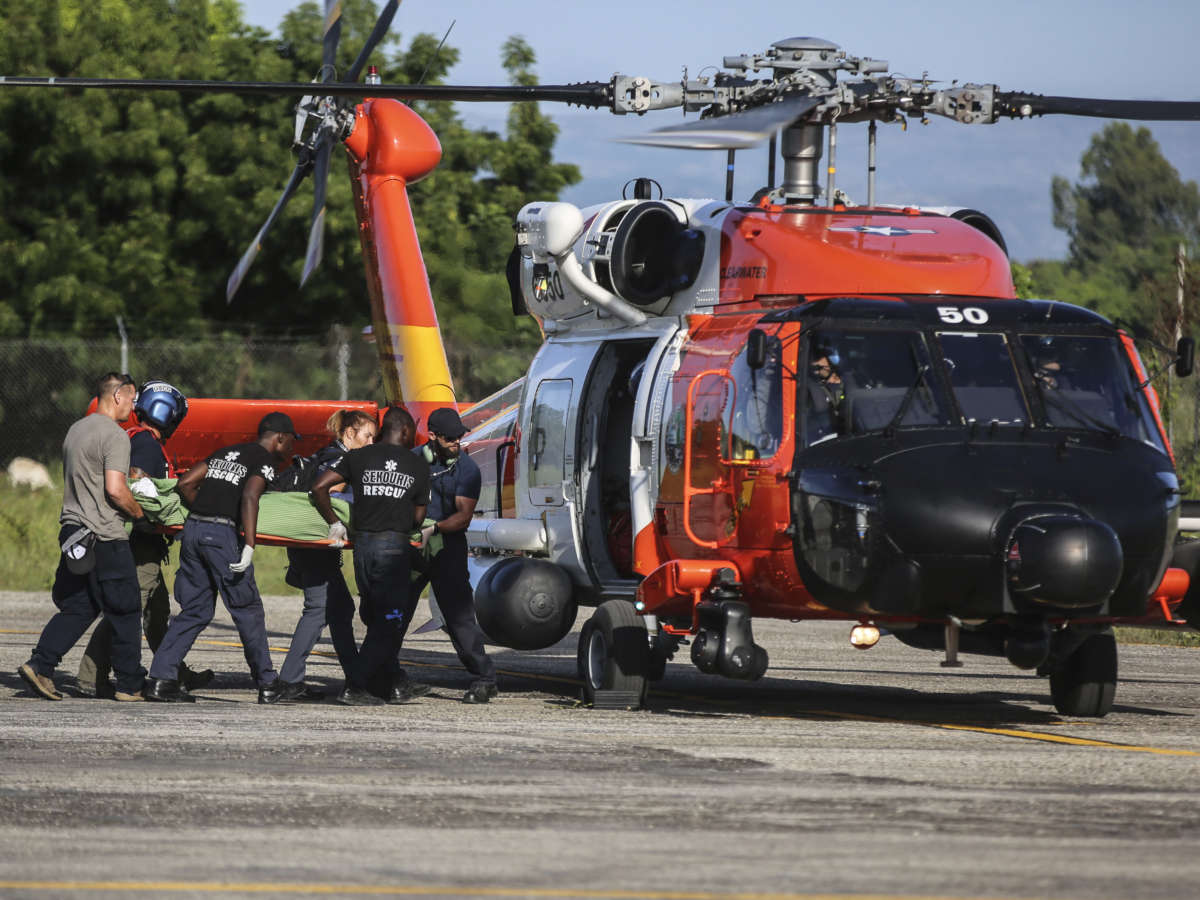 A person injured in the earthquake is transferred to a US Coast Guard helicopter in Les Cayes, Haiti, Monday, Aug. 16, 2021, two days after a 7.2-magnitude earthquake struck the southwestern part of the country.
Image credit: Joseph Odelyn

The extent of the devastation in Haiti grows worse by the day.

The death toll following the 7.2-magnitude earthquake that struck the southwestern part of the island on Saturday has climbed to 1,941 and nearly 10,000 people were injured, according to official counts on Tuesday.

Haiti’s Civil Protection Agency anticipates those figures will climb, noting that many people are still missing.

Tropical Storm Grace crossed directly over the quake-ravaged portion of the country on Monday night and much of Tuesday, adding to the misery of the displaced survivors.

The downpour and winds that pummeled the region are also making it harder for humanitarian aid organizations to assess the extent of the damage and deliver much-needed aid.

More than 1 million people are affected

The earthquake’s devastation is centered in the country’s southwestern area, particularly in the city of Les Cayes.

UNICEF estimates roughly 1.2 million people, including 540,000 children, have been impacted by the back-to-back disasters in recent days.

The humanitarian organization estimates that it will need at least $15 million to respond to the most urgent needs of at least 385,000 people. That’s including 167,000 children under the age of five for a period lasting at least eight weeks.

Thousands of homes and buildings were destroyed

Residents whose homes were damaged during the earthquake campout at a soccer field in Les Cayes, Haiti, Monday, Aug. 16, 2021. Fernando Llano/AP

The disastrous quake, which occurred along the same fault line as the one in 2010 that killed over 200,000, has destroyed more than 83,000 homes as of Monday, according to USAID.

Hospitals struggle to operate in the days after

A man crouches on the rubble of the hospital destroyed by the earthquake in Fleurant, Haiti, Tuesday, Aug. 17, 2021, three days after the 7.2-magnitude quake hit the Caribbean nation. Fernando Llano/AP

It’s unclear just how many hospitals are damaged. As of Tuesday, most in the heavily damaged areas were attempting to transfer patients with severe trauma injuries to Haiti’s capital city of Port-au-Prince, according to USAID.

The Associated Press reports the entire obstetrics, pediatric and operating wing at the L’Asile hospital in the southwest of the country collapsed. The hospital was still able to treat about 170 severely injured quake victims in tents in the yard of the building.

The U.S. Coast Guard is conducting medical evacuations to the capital city by helicopter. As of Monday night, 41 critical patients were transferred.

Extensive damage to roads and bridges have made it difficult for rescue crews to reach some of the hard hit remote areas of Haiti.

The U.S. Coast Guard continues with medevac operations, but has requested additional support.

Four days after the earthquake, Haitians from remote towns are still arriving at the public hospital in L’Asile with broken arms and legs, the Associated Press reports.

Help from global humanitarian organizations is trickling in. This week, UNICEF said it delivered medical kits to three hospitals in Les Cayes – including gloves, painkillers, antibiotics and syringes – to treat 30,000 earthquake victims.

The World Health Organization hinted at the long-term impact of Saturday’s earthquake, declaring an emergency for Haiti and neighboring Dominican Republic for the rest of the year.