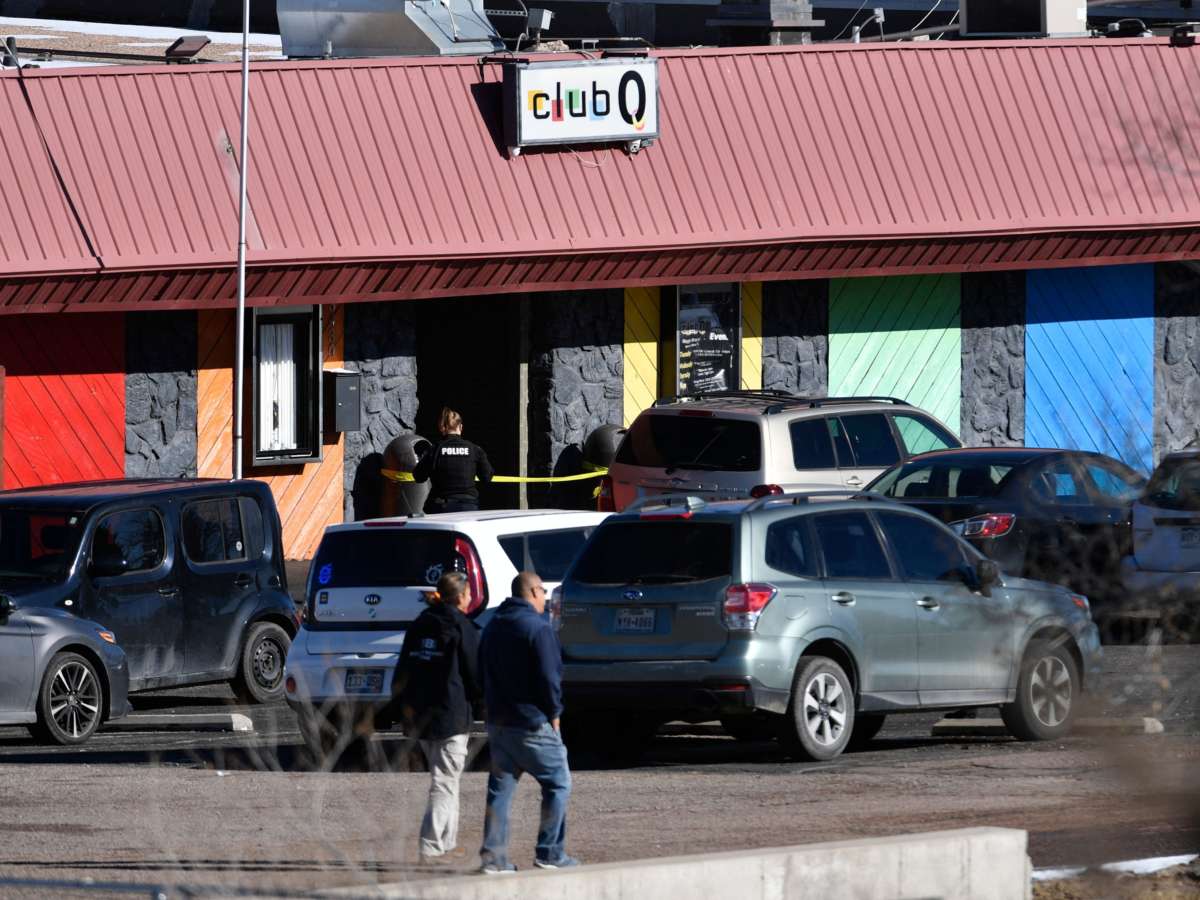 A gunman killed five people and injured at least 25 others at an LGBTQ nightclub late Saturday in Colorado Springs, Colo.

Authorities identified Anderson Lee Aldrich, 22, as the suspect and took him into custody shortly after arriving on site at Club Q. Police are still investigating the gunman’s motive and whether the attack constitutes a hate crime.

The attack comes six years after the deadliest attack on the LGBTQ community in modern U.S. history, when a gunman killed 49 people and wounded 53 others at the Pulse nightclub in Orlando, Fla.

Here’s what we know about the Colorado Springs shooting.

Colorado Springs Police Chief Adrian Vasquez said the gunman began shooting as soon as he entered the nightclub. At least two people helped subdue the gunman, which the chief described as heroic.

“We owe them a great debt of thanks,” he said at a news conference Sunday.

Colorado Springs Mayor John Suthers told NPR that one of the patrons “took the handgun from the [shooter] and hit him with the handgun to disable him.”

Club Q wrote on Facebook that the patrons’ “quick reactions” helped end the attack, which it called a hate attack, and prevented more people from being killed or injured.

Police said the first call came in at 11:57 p.m. local time after which the first officer arrived three minutes later. The suspect was taken into custody at 12:02 a.m. MT.

Authorities found two firearms, including a long rifle which the shooter used in the attack.

Club Q, which opened in 2002, serves the Colorado Springs area with drag shows, karaoke, and dance parties for those 18 years and older.

Both Vasquez and Colorado Gov. Jared Polis called the club a “safe haven” for LGBTQ residents of Colorado Springs.

“Club Q has been a safe haven for the LGBTQ community in an area where it hasn’t always been easy,” Polis, who became the first openly gay governor in the U.S. in 2018, said at a church service Sunday. “It’s a place where we can gather, dance, and share the joy.”

Colorado Springs Police Lt. Pamela Castro said the department was shocked at the attack, as the nightclub had not been a problem spot for the city.

Club Q announced it will be closed until further notice.

The shooting came on the eve of Transgender Day of Remembrance

The gunman targeted the club the night before Transgender Day of Remembrance, which occurs annually on Nov. 20 to honor victims of anti-trans violence.

The day of remembrance had its start in 1999, when LGBTQ rights advocate Gwendolyn Ann Smith helped organize a vigil for transgender women Rita Hester and Chanelle Pickett of Massachusetts. Both were women of color.

“No one I spoke with then knew who Chanelle Pickett was, even though the trial of her murderer, William Palmer, had ended only months before Hester’s death,” Ann Smith wrote in 2012. “It seemed clear to me then that we were forgetting our past, and were — to paraphrase George Santayana — doomed to repeat it.”

Sen. Michael Bennet, D-Colo., expressed his devastation upon hearing news of the shooting in his state and called for more protection and support of the LGBTQ community.

“As we seek justice for this unimaginable act, we must do more to protect the LGBTQ community and stand firm against discrimination and hate in every form,” he wrote on Twitter.

President Biden said in a statement: “There is no place for violence, hatred, and bigotry in America. Yet, tragically, as last night’s attack in Colorado Springs reminds us, too many LGBTQI+ people in the United States — and around the world — continue to face unconscionable attacks.”

Biden called for Congress to pass the Equality Act, which would ban discrimination against people based on sexual orientation and gender identity. The bill stalled in the Senate after passing the House in February 2021.

In June, Biden signed the first major gun safety law passed by Congress in nearly 30 years, a month after the mass shooting at an elementary school in Uvalde, Texas that killed 19 children and two adults. The legislation expanded background checks on people between the ages of 18 and 21 seeking to buy a gun and expanded an existing law that prevents people convicted of domestic abuse from owning a gun.

But he said more must be done.

“We need to enact an assault weapons ban to get weapons of war off America’s streets,” Biden said in a White House press release.