What Was Inside Orlando’s Confederate Statue Time Capsule? 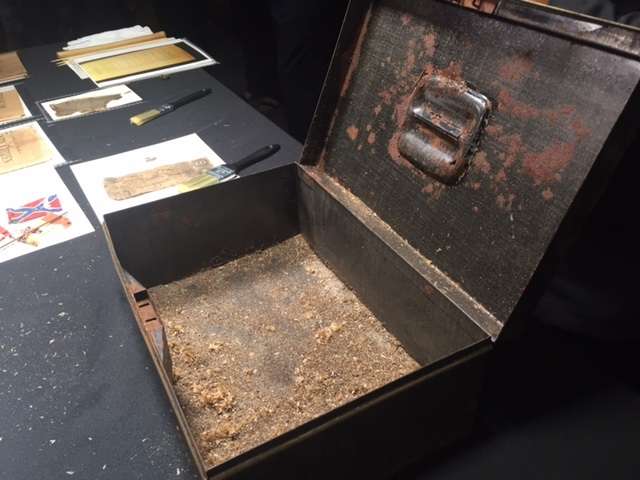 Newspapers, confederate money and pieces of a flag were found inside a time capsule discovered inside the confederate statue known as Johnny Reb. 90.7’s Catherine Welch was in the room when the capsule was opened and joins us with more.

CRYSTAL: So let’s start at the beginning, how was this time capsule discovered?

CATHERINE: There was an effort back in May to move the controversial statue out of Lake Eola. So the city moved it about a month later to the confederate section of Greenwood Cemetery. Because time capsules were common, the cemetery’s sexton suspected that there may be one inside Johnny Reb, and there it was inside the base of the statue.

CRYSTAL: The time capsule is actually a metal cash box. So what was in there?

CATHERINE: There was a faded caption to a print of Gen. Robert E Lee, three newspapers: the South Florida Sentinel, the Orange County Edition and the Daily Reporter-Star. There was very fragile and worn confederate money, they were bills. Minutes of a convention of the United Daughters of the Confederacy held in 1910. What appears to be confederate flag lapel pins,  and the bottom of the box is covered in dusty fragments of everything that had been inside of it for more than a century.

CRYSTAL: Do we know the significance of the items placed in the box?

CATHERINE: Until historians can examine the entirety of the newspapers and the other items further, it’s unknown. The city’s Historic Preservation Officer Richard Forbes read some of the items in the newspapers such as an advertisement for chicken and waffle, the account of a New Hampshire man drowning himself in Lake Eola. Why these editions were placed in the box is still a mystery at this point.

CRYSTAL: What surprises were there?

CATHERINE: Forbes was surprised by how bad of shape the confederate bills were in. He expected the currency to have been printed on higher quality of paper. Mayor Buddy Dyer was surprised how much of the items inside remained intact. And maybe the sexton of Greenwood Cemetery, Don Price, was surprised that there was anything at all. I asked him before the time capsule was opened if he thought there was anything in it, and he didn’t think so.

CRYSTAL: Catherine, the city discovered the capsule back in June, here we are in August, what took so long to open it?

CATHERINE: That answer depends on whom you ask. The city says the wait was to make sure everything was handled in an appropriate manor. The Orlando Sentinel has been reporting that the United Daughters of the Confederacy has filed a lawsuit against the city claiming they own the time capsule since they were the ones who erected the statue. I asked Mayor Dyer about that legal tug-of-war, and he says he’s only aware of it through newspaper articles. And it’s those news reports that say the opening was postponed so ownership of the time capsule could be hashed out.

CRYSTAL: So is there a lawsuit?

CATHERINE: The city says it has not been officially served. The Orlando Sentinel reports there’s a pre-trial conference scheduled next month. Also, an attorney for the Daughters of the Confederacy sent the city a letter dated today claiming that while ownership is up in the air the city should refrain from opening the capsule. He said opening it would lower any value it might have. The city defends its ownership pointing to a program created during the statue’s unveiling that turns the statue and its content over to the city.