What To Make Of The Yankees Outbreak? Scientists Say: Don’t Panic, We Expected This 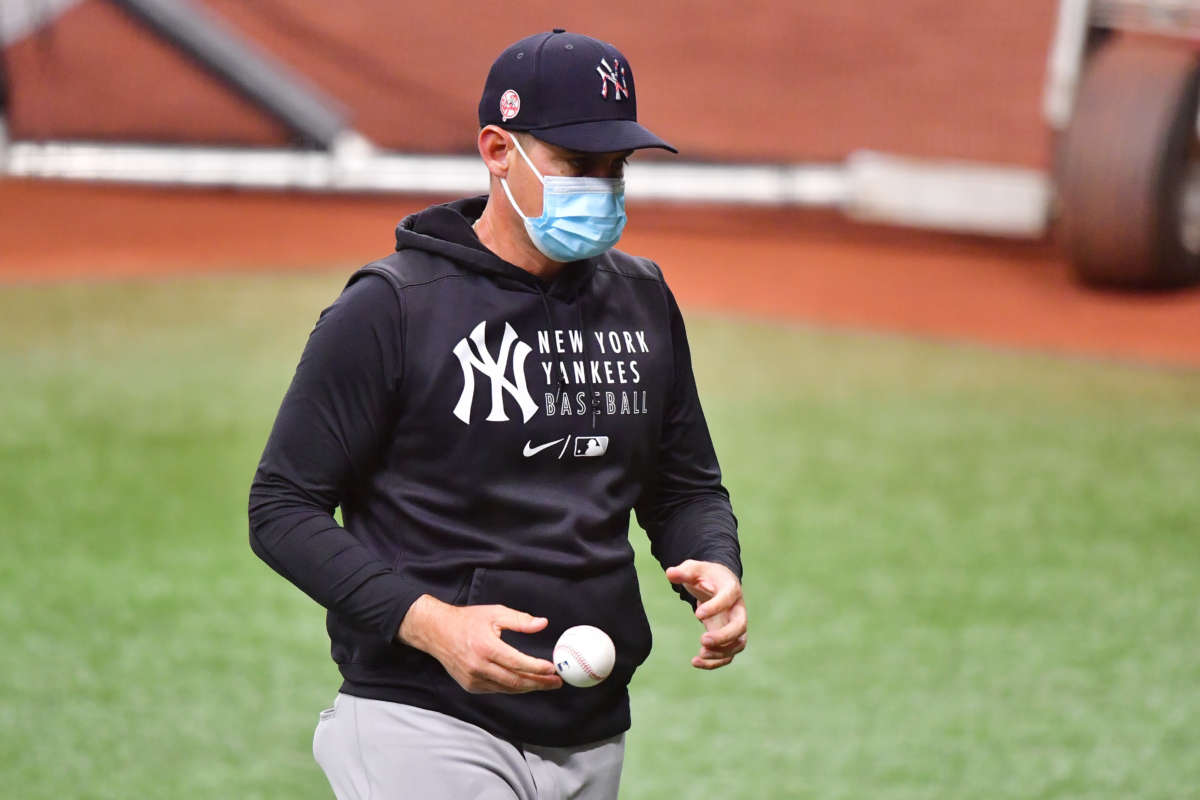 Eight members of the New York Yankees — the team’s All-Star shortstop Gleyber Torres, along with seven coaches and staff members — have tested positive for the coronavirus this week, even though all of them had been vaccinated.

The outbreak of so-called “breakthrough” cases was first detected Sunday as the team was flying to Florida for a series against the Tampa Bay Rays. Seven more people, including Torres, tested positive over the three subsequent days.

Of the eight positive cases, the Yankees said, seven are asymptomatic. One person has reported “some symptoms,” according to the team.

No new cases were reported Thursday, though the Yankees are continuing with daily testing and contact tracing.

Scientists have stressed that the team’s cases are in line with what is already known about the vaccines. “Vaccine breakthrough cases are expected,” writes the CDC on its information page about breakthrough cases. The agency says at least 9,245 breakthrough infections have been documented, out of the 95 million Americans who completed their vaccination course at least two weeks ago.

“A lot of people may be wondering, with 8 vaccinated breakthrough cases on the Yankees — is this evidence the vaccines aren’t as effective as we thought?” Zach Binney, an epidemiologist at Emory University, wrote on Twitter. “The short answer is no.”

“We know that these vaccines are really good, but they’re not 100% protective against all infection,” said Saad Omer, the director of the Yale Institute for Global Health. “They are way more protective against the consequences of that infection, like hospitalization or death.”

Here’s what else to know about the Yankees outbreak:

This number of breakthrough infections is in line with what scientists know about the Johnson & Johnson vaccine.

All of the positive cases on the Yankees had been vaccinated with the single-shot Johnson & Johnson vaccine, which was favored by baseball teams because of their complicated travel schedules. According to the team, players and staff were offered the vaccine together on April 7.

In clinical trials, the Johnson & Johnson vaccine was 100% effective in preventing hospitalization and death. When it came to preventing any type of COVID-19 infection, the vaccine was 66 to 72% effective.

“That means there will be a gap in the protection, in the sense that there will be some people who will get infected,” said Omer. “But the reassuring part is that these cases were not severe.”

Scientists say that given the size of the team’s traveling party, it’s likely that a smaller number of people got infected than would have been expected otherwise. And, the number of cases is in line with what we know about the vaccine’s efficacy.

Though the Centers for Disease Control and Prevention is not currently investigating the outbreak, the agency’s director Dr. Rochelle Walensky told reporters at a White House briefing Thursday they hoped to learn more.

“We will look to more data from that report to understand what happened there,” she said. “All of the real world data we’ve seen that’s been in the published literature, large studies, in many different settings, have demonstrated that those vaccines are effective, have a high effectiveness against disease.”

Also in line with expectations: Most of the breakthrough cases are asymptomatic.

Of the eight cases in the Yankees outbreak, seven are asymptomatic. The one symptomatic case is reportedly mild.

All of the coronavirus vaccines that have been authorized for use in the U.S., including the Johnson & Johnson vaccine, are extremely effective at preventing severe cases of the disease, hospitalization and death.

“The vaccines are good at preventing infection and transmission, but they are f’ing RAD at preventing severe disease,” Binney said on Twitter. “They’re like a strong wind in from the outfield – [home runs] become doubles, doubles become outs.”

“I think one of the things we’re seeing is that being vaccinated en masse like we are, we’re seeing the vaccinations also kind of blunt the effects of the virus,” said Yankees manager Aaron Boone, speaking to reporters ahead of the team’s Wednesday game.

Those asymptomatic cases were discovered in part because MLB players and staff are tested much more often than the general population.

The MLB conducts thousands of tests every week on players, coaches and staff. During the past week, the league ran 10,629 tests, only ten of which were positive, coinciding with the Yankees’ outbreak.

The Yankees discovered their first positive case on Sunday as the team was flying to Tampa for a series against the Rays.

Afterward, they immediately began testing their entire traveling party, which The New York Times reported to be about 50 or 60 people, three times per day — one PCR test, one saliva test, and one rapid test.

Most Americans only seek tests if they are showing symptoms of a possible COVID-19 infection. There are currently fewer than a million tests conducted each day in the U.S., meaning on any given day, only one in 330 Americans is getting a test.

The Yankees were working and traveling together in close quarters without masks or other preventative measures.

As an incentive for teams to vaccinate as many people as possible, the MLB and its players union agreed to relax some coronavirus-related protocols if teams are able to vaccinate 85% of their players and certain staff.

The Yankees are one of a dozen teams who’ve reached that threshold, according to the league, and four more will join them once two weeks have elapsed since their last shot.

That means Yankees players and staff did not have to wear masks while gathering together in the clubhouse or training rooms. They were also allowed to dine at indoor restaurants and share club facilities like saunas and entertainment rooms.

In light of the outbreak, the team has since re-adopted many of those preventative measures, according to Boone.

“We’ll mask back up. We’ll keep our distance,” Yankees pitcher Jameson Taillon said Wednesday. “We’ll do whatever we have to do to get this season in.”