What The School Attack Means For Afghanistan’s Future 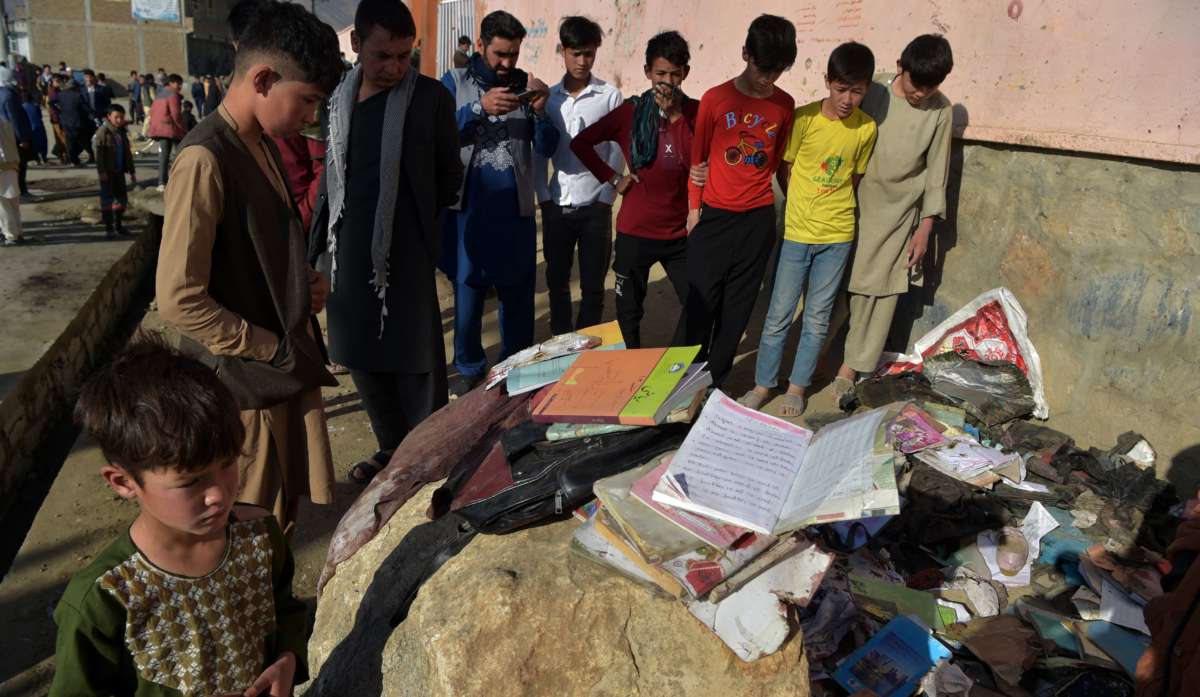 Onlookers stand next to the backpacks and books of victims of the bombing Saturday in Kabul. Most of the victims were teenage schoolgirls.
Image credit: Wakil Kohsar

Scores of teenage schoolgirls are dead, killed by unknown bombers on Saturday as they were leaving school in Kabul, Afghanistan.

The attackers appeared to have targeted girls. More than 80 people were killed and about 150 injured, most of them girls of high school age. Most were from poor families; many weaved carpets in addition to studying to support their families.

It was the deadliest bombing targeting civilians in at least a year in Afghanistan.

No group has claimed responsibility. ISIS has launched similar attacks in the past in the same part of Kabul, which is home to the Hazara minority group. The Taliban denied involvement, though the Afghan government blamed the Taliban for the attack.

Though Muslims in Afghanistan are preparing to celebrate the Eid holiday, “there is a sense of grief and fear and anxiety” now in Kabul, says Shaharzad Akbar, the chair of the Afghanistan Independent Human Rights Commission.

Horrific violence is already normalized in the country, a “forever pain of us Afghans,” as Akbar has described it.

But the fact that the attackers targeted schoolgirls in a poor neighborhood that has been attacked before “just was devastating,” Akbar tells All Things Considered. “And I think we’re all in a shock. We’re all trying to process what this means.”

President Biden has set a deadline for U.S. forces to leave Afghanistan later this year. Negotiations are now happening between the Afghan government and the Taliban. The Taliban has stepped up attacks around the country as the U.S. withdraws air support for Afghan security forces.

Akbar talked with Mary Louise Kelly about what she wants to see in peace negotiations for the future of Afghanistan. Here are excerpts, edited for clarity and length:

As someone who advocates for human rights, for women’s rights, what worries you most as you look ahead to the coming weeks and months?

One of the possible scenarios, unfortunately, is an all-out war, even further escalation of violence that’s already unbearable. And that will make everyone vulnerable. It will especially make women vulnerable, children vulnerable. Short of that, of course, there are also concerns about what a political process would look like, to what extent it will be inclusive.

If there are no women in the room, or very few women in the room, of course there will be no meaningful discussion about women’s rights and the future of Afghanistan or even human rights and the future of Afghanistan. If there are no victims of war who are being represented and being heard by both parties, there will be no attention to justice and human rights. So we are trying to do everything we can to prevent that from happening, to encourage parties to talk to each other, to push for a cease-fire and to push for an inclusive process.

And how do you do that?

Part of it is documenting civilian casualties and talking about them and reminding people and the parties about the cost of war for civilians, for people who are not in active combat, but they are paying with their lives and livelihoods like those schoolchildren in Kabul.

Part of it is putting pressure on the international community, including the U.S. and the U.N., about the responsibility that they have to the Afghan civilians and to the Afghan public in general, and reminding them that military withdrawal should not mean, you know, forgetting Afghanistan and the Afghan public in this difficult moment. And a part of it is working with our own communities and elders and influential people in civil society and media to protect and expand the civic space to enable us to have a more inclusive process.

I was looking at your Twitter feed, and before you give your professional title, you write, “Mom,” that’s the first identifier you give yourself. May I ask how you explain to your child what’s happening in your country right now?

Well, my son is turning 2. So we are trying to protect him. But it’s hard. I think as a mom, it has become harder. Because on the one hand, last year’s attack on a hospital just before his first birthday really shattered me and this latest attack as well, because I think about him and about his future in this country. And does he have a future in this country?

But also because of the nature of my job, I really don’t go anywhere public with my son because I don’t want to put him at risk because of his affiliation with me. So it’s, you know, parenting in conflict, I guess. Yeah, it’s a different version of parenting.

We’ve been talking about what worries you. What gives you hope?