What One Family Lost In Pulse Nightclub A Year Ago 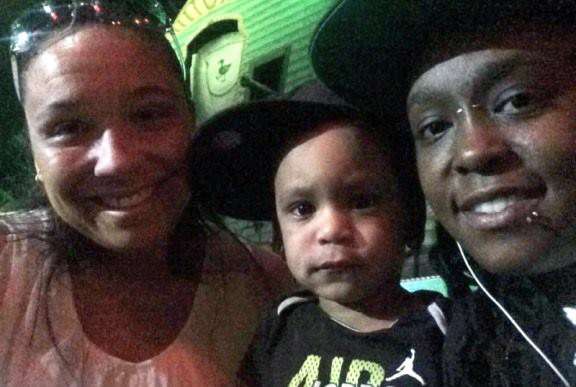 Emily Addison, left, and Deonka Drayton with their son.

A year ago a gunman opened fire in Pulse nightclub in Orlando, Fla. Deonka Drayton was one of the 49 people murdered that night, in what was the deadliest mass shooting in modern U.S. history.

Drayton was 32 at the time, and had a son with Emily Addison.

“She had a beautiful voice, the most amazing smile, and she smelled so good all the time,” Addison said during a recent visit to StoryCorps.

The two moved to Florida together in 2012, and Drayton hated the heat.

“But it did not matter how hot it was outside, she would go outside and play ball with our son,” 37-year-old Addison said. “And she used to always tell me that, as long as she was alive, our son and I would never want for anything. And she kept her word.”

The night she was killed, Drayton sent texts to Addison.

“She said that she was scared, people were shot,” Addison recounted. “But when our son is asleep, we turn our ringers off. And I feel like I wasn’t there for her when she needed me the most.”

When she finally saw the texts, Addison tried to contact Drayton, but her calls went straight to voicemail.

“I prayed so hard my knuckles were white,” Addison says. “But she was one of the ones that was murdered in the bathroom.”

As it gets closer to the one-year anniversary, Addison is constantly reminded of the last time she saw Drayton.

“I can tell you what was in her stomach because I made the last meal. She loved my cooking. She loved my cooking,” she says. “My son, he’s three now, and every night … when we’re going to bed, we walk up the stairs, he’ll turn to her picture and say, ‘Night, night, mommy.’ I don’t know how to get him to understand that she’s never coming back, and I miss her so much. That feeling is constant. Like, I need her to call me. I need to see her.

“I will always love her, no matter what,” Addison says. “There will never be an end.”