Florida ranks near bottom for booster shots in nursing homes. How is N. Dakota getting it done? 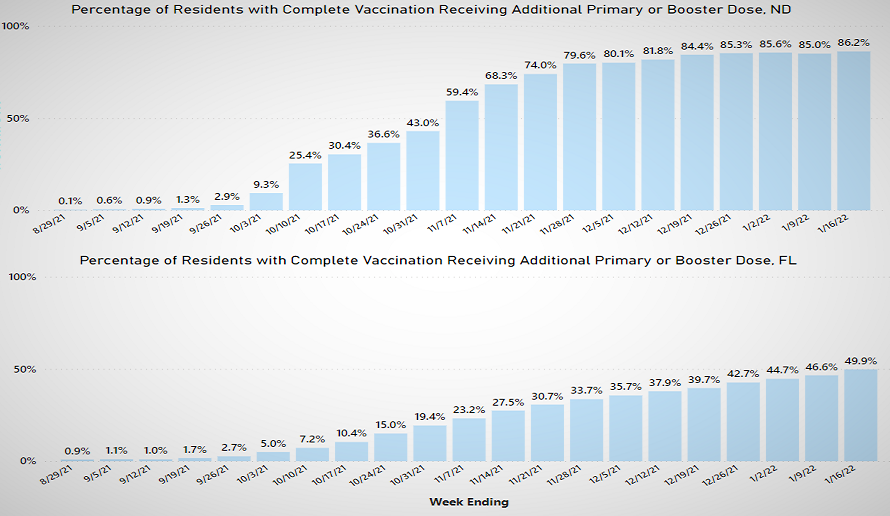 Florida ranks near the bottom when it comes to the percentage of nursing home residents who’ve gotten the COVID-19 vaccine booster.

And just last week the CDC released data confirming that the booster shots confer powerful protection against hospitalization from the Omicron variant of the coronavirus, especially among seniors.

Jason Salemi, an expert on public health data at the University of South Florida, said the CDC studies show that, even with Omicron, older people who get the vaccine booster are much less likely to become seriously ill.

“For seniors who are 65 years of age or older, if they were boosted, (they are) 49 times less likely to be hospitalized for COVID-19 compared to people in that age group who are unvaccinated,” he said.

Vaccine protection wears thin over time, especially for seniors in nursing homes who were some of the first to get their shots.

“The good news is the booster shot is proving immensely helpful, raising that vaccine efficacy against hospitalization back up to 90 percent,” Salemi said.

“It’s really critical that everybody get their booster,” said Dr. Nicole Iovine, chief epidemiologist at UF Health Shands Hospital in Gainesville, “but in particular, vulnerable populations like the nursing home population and the over-65 population.”

But in Florida, only half of fully vaccinated nursing home residents got the booster. When you add unvaccinated residents into the mix, just 41% are boosted.

Florida ranks third from the bottom.

The state doing the best is North Dakota.

Shelly Peterson with the North Dakota Long Term Care Association said that, after the horrors of 2020, they saw that vaccines save lives.

So even before the boosters were available in late September, Peterson’s team had already checked in with each long-term care facility. They made sure every facility had a vaccinator lined up and a second, back-up vaccinator.

“We immediately began working with facilities, as did the health department, to schedule those clinics, to get the boosters out there,” Peterson said. “And, really, it was a very aggressive campaign from Day 1.”

She said they’re getting support from the governor and clear direction from medical experts.

“During the pandemic, there’s been this pushback of the medical knowledge and medical community and research aspect that it’s been to the detriment and death of some,” Peterson added. “And, yes, we have that probably in our general population but not in our long-term care population.

Their results were impressive.

While North Dakota was rushing third doses into nursing homes, Florida leaders were focused on early treatment with monoclonal antibodies and opposition to mask and vaccine mandates.

University of Central Florida political science professor Aubrey Jewett says that reflected a shift in approach for Gov. Ron DeSantis, who early last year led a concerted effort to get the first two doses to seniors.

“Today,” Jewett said, “the governor says, yep, they’re available but we’re not pushing anybody to take them. We’re not mandating anything. We don’t want the government to have overreach.”

Promoting vaccines is unpopular with Desantis’ political base, Jewett said. “Surveys have shown that Republicans are not getting this vaccine at nearly the rate of independents and Democrats, and not only are they not getting it but that they think that there’s something dangerous about it.”

Simone Marstiller, the secretary of the Florida Agency for Health Care Administration, said at a recent press conference that DeSantis continues to put seniors first and the state has strike teams that can bring both treatment and vaccines to nursing homes.

“There is an entire structure,” she said, “that is happening behind the scenes to make sure that these individuals get the resources and the information that they need.”

State officials did not answer questions on how many strike teams have been deployed.

In recent weeks, MaryLou McKeon says she’s getting more calls to approve booster shots for clients in nursing homes. She leads the guardianship program at the Council on Aging of Volusia County and works in four counties.

“It’s moving along at this point,” she said, “and I guess there’s no urgency because people are not dying like they were a year ago.”

But state data compiled by Salemi at USF show that, as Omicron cases begin to fall, newly reported deaths are rising among seniors.

The increase is beginning to show up among Florida’s nursing home residents, too. The CDC reports at least 53 have died of COVID-19 this month.