What is Music Therapy & Should Florida Regulate It? 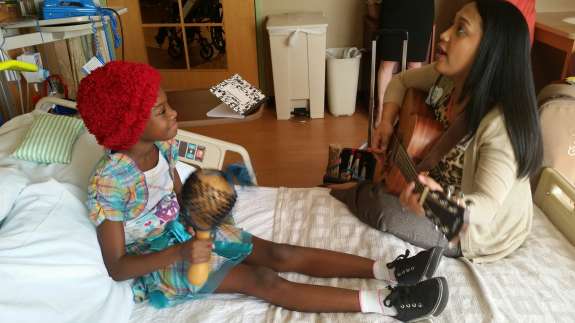 10-year old Miracle Millionor’ sits on her hospital bed, wearing a red, fuzzy beanie and shaking a big, blue-beaded maraca at Florida Hospital for Children. Her music therapist, Rich Moats, sits on the bed across from her—guitar in hand.

It’s hard to tell Miracle has been suffering from severe migraines stemming from a brain hemorrhage. She’s been in the hospital for three weeks and has tried all sorts of things to deal with her pain, including yoga and pet therapy.

“But the one I like the most is music because it expresses my frustration dealing with my pain and it also distracts me from focusing on my pain. It’s extraordinary because it’s not my everyday life,” said Miracle.

Miracle’s music therapist Rich Moats goes from room to room, providing her services to people of all ages at Florida Hospital. Everyone responds differently to music and Moats says that’s why she keeps a close eye on how her patients are responding. “Are they making eye contact? Is their heart rate going up or going down? Are they breathing heavier or are they breathing easier?”

Moats says this is the clinical training that separates her from just anyone who can play guitar and has time to sing to patients. She’s in favor of the licensing by the Florida Department of Health because it emphasizes that training.

There are more than 250 music therapists in Florida that have national credentials from The Certification Board for Music Therapists. That requires at least a bachelor’s degree in music therapy and at least 1200 hours of clinical training. If this legislation passes, they’d be required to go a step further and get a state license.

“It protects the public by making sure that a music therapist has actually received proper training and that our profession is being regulated,” said Music Therapist Michelle Pellito, co-chair of the task force that wrote the legislation filed this session.

Georgia, North Dakota and Nevada already require music therapists to get a license. Rhode Island and Wisconsin require them to be registered. And Utah has a music therapy state certification program.

The push to get states to regulate music therapy has not come without opposition. That’s according to Kimberly Sena Moore who teaches music therapy at University of Miami. Moore says most of the concerns have come from other healing professionals who want to protect what they do.
“In some other states we have heard from say occupational therapists or the speech language pathology organizations and one of their first concerns is can they still use music and that we have been addressing,” said Moore.

That doesn’t seem to be a concern for Florida. There’s disclaimer language in the bill that says other health care professionals can use music as long as they are working within their scope of practice. Still, if the bill passes, anyone who identifies themselves as a music therapist would need to have a license starting January first 2016.

49-year old Margie Stadt, a nurse herself, is using music therapy to recover from a series of strokes in February. She was paralyzed on her right side but is making positive gains. She says when she added music therapy to her physical therapy she needed less pain medicine. “I can’t walk unassisted yet, but I will,” said Stadt.