What Is ‘Black Fungus’? And Why Is It Spreading Among India’s COVID Patients? 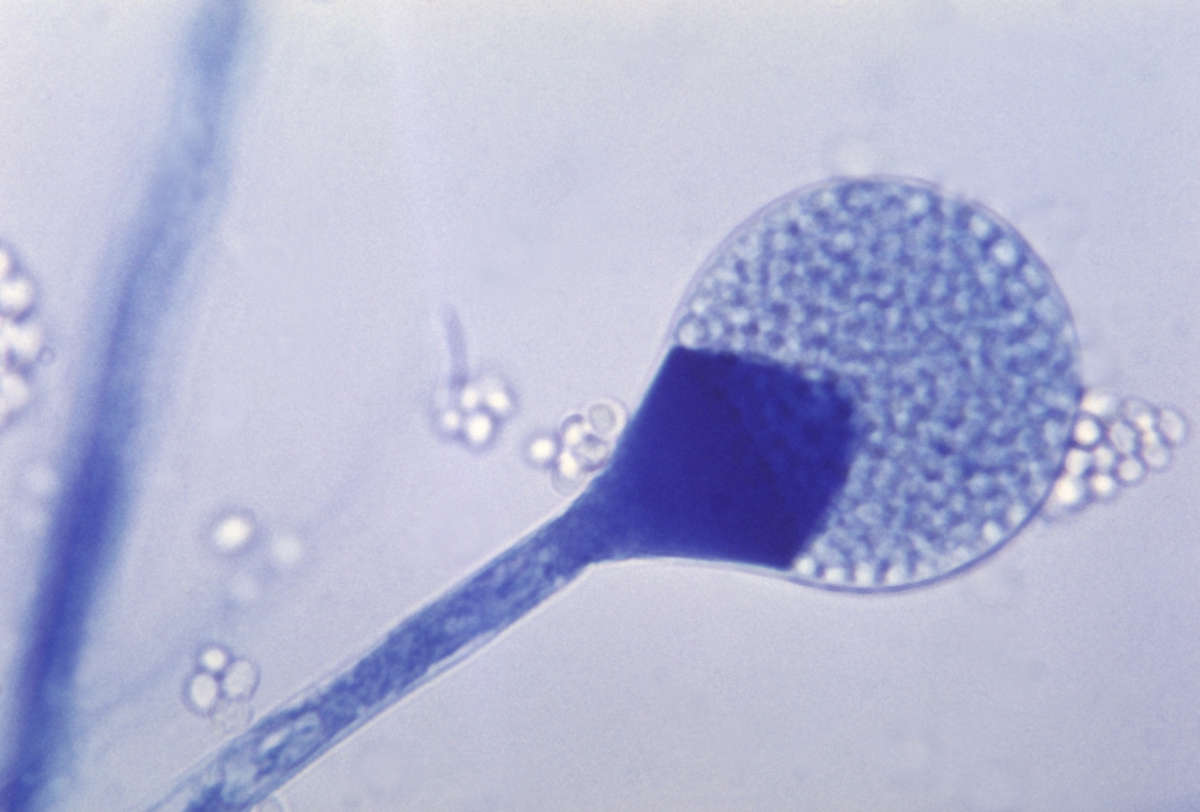 A light micrograph of a mature sporangium of a mucor fungus. India is seeing a rise in cases of mucormycosis, a rare but dangerous fungal infection.

It’s called the “black fungus,” and it can be deadly. It’s also adding to India’s growing COVID-19 woes at the moment.

On Sunday, the Indian Council of Medical Research and India’s Health Ministry issued an advisory calling for better awareness, screening and management of mucormycosis, a rare but dangerous fungal infection.

“While exact numbers are not available, we’re seeing a rise in cases in Delhi, Gujarat and Maharashtra,” says Dr. Aparna Mukherjee, a scientist at the Indian Council of Medical Research and one of the experts who wrote the advisory.

The symptoms of mucormycosis are mild at first and can often be missed in the initial stages.

Dr. Ronak Shukla, an ear, nose and throat doctor assigned to COVID-19 care at the government-run LG Hospital in Ahmedabad, treated a 35-year-old male patient who recently recovered from COVID-19 after being administered oxygen for a week in the intensive care unit. Several days after recovering from COVID-19, the patient was back, complaining of an intense headache, pain in the sinus area and the right eye, blurred vision and swollen cheeks. An endoscopic examination revealed discoloration — a blackened area — around the nasal sinuses.

The disease progresses rapidly and “attacks blood vessels and live tissues,” Shukla says. “As it kills them, it turns them all black — and that’s where [the disease] gets the name ‘black fungus.’ ” In just three days, it can spread to the eyes or the jawbone. In such cases, the only way to stop the spread to the brain is to remove the infected eye or jawbone surgically.

“Once it spreads to the brain, the fatality rate is over 50%. It’s sad to think that people who’ve gone through the immense distress of COVID now have to deal with this severe disability as well,” he says.

Mucormycosis isn’t a new disease, Shukla says. It’s caused by a group of molds, called mucormycetes. Individuals are infected after inhaling fungal spores found naturally in India’s environment and soil. “For most people with a healthy immune system, exposure to the fungus really won’t matter,” he says. “They won’t get sick.”

India’s current battle with COVID-19 may be brewing many of the complications that are leading to an unprecedented rise in these cases, doctors suggest. India has reported 23 million COVID-19 infections and a death toll of more than 250,000 people, accounting for 1 in 5 active infections worldwide.

“Mucormycosis is an opportunistic infection,” Mukherjee says. “Before COVID, people were far more likely to contract it only if they were in a situation where their immunity was weak, say after an operation, a prolonged hospital stay or [an organ] transplant, but today COVID-19 has weakened immunity considerably, leaving more people vulnerable to the disease.”

Shukla says there are now 100 cases in public hospitals in Ahmedabad, when previously, there were only two to three cases a year.

People who have gotten sick with mucormycosis have had three factors in common, says Dr. Devashish Palkar, a psychiatry resident now treating COVID-19 patients in critical care at the government-run New Civil Hospital in Surat. Thirty cases of mucormycosis have been admitted to the hospital over the past week, he says, and new cases are popping up every day. “COVID-19 is the main culprit, followed by uncontrolled or newly diagnosed diabetes. And finally, the added effects of steroids which — though are lifesaving drugs — can render you immunocompromised if used at higher doses than recommended or for a longer duration.”

“We need to find a way to moderate the drugs,” Palkar says, “but with such virulent attacks of COVID, the patient might die without the medication.”

Treatment for mucormycosis involves identifying the condition in infected patients quickly, removing all infected tissue through surgery and following up with an antifungal injection called Amphotericin B. The injection costs 3,000 rupees ($40) in India. It has to be administered every day for 21 to 42 days. States such as Mumbai are now making the injections available free at public hospitals since their cases are rising, too. Rajesh Tope, health minister of Maharashtra, says the state may have over 2,000 cases of mucormycosis.

Timely intervention helped save his patient, Shukla says, and he did not suffer other complications.

But as the pandemic rages in India, hospital hygiene will eventually need to come into scrutiny. “If the hygiene in hospitals isn’t adequate, then the damp [and dirty] surfaces [such as hospital devices and equipment] can breed the fungal spores, exposing patients when their immunity is most compromised,” Shukla says.

COVID-19 patients using oxygen concentrators are also at risk, Shukla says. The devices come equipped with a humidifier bottle to prevent the patient’s airways from becoming too dry while breathing directly from the concentrator. But it’s where fungal spores can thrive. “If the humidifiers are not properly cleaned or if they don’t work, then the chances of contracting mucormycosis are higher,” Shukla says.

Even though it’s an invasive disease, it can be treated, so there’s nothing to panic about right now, Mukherjee says. The advisory was issued to create a greater awareness of the condition among medical professionals who may not have seen many cases. “At the moment, we need to suspect it early and detect it early to save lives,” she says.