What If Mitt And Jeb Really Do Go At It, Hammer And Tongs? 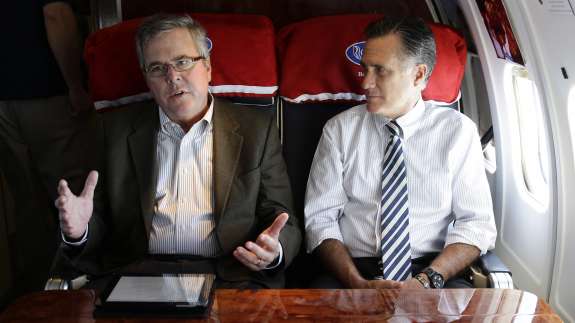 Pity the poor guys who are trying to run for president while still serving as governors.

All the media attention this week went to former governors Mitt Romney and Jeb Bush, because Mitt suddenly decided to call in his chits and get back in the presidential conversation for 2016. Virtually every news organization in North America instantly got wide-eyed about it.

Meanwhile, governors like Chris Christie in New Jersey and Scott Walker in Wisconsin and Mike Pence in Indiana were delivering their State of the State speeches Tuesday and hoping for a little national media love, as well. And that’s not to mention other govs such as John Kasich in Ohio and Bobby Jindal in Louisiana.

But the focus was on names from the past: Romney and Bush.

Nor was there much bandwidth for the various senators and others who are running or wishing someone would ask them to run. In the media space, all these names were scarcely to be found.

How distracting was the Romney bombshell? Well, if the man is serious, and follows through, it will change fundamentally the nature of the GOP primaries next year. And that alters all the odds on White House occupancy two years hence.

Let’s review the bidding. Romney, the former governor of Massachusetts, now says he wants to reprise his 2012 role as the GOP nominee for the White House — and not just as a fallback candidate in the absence of a fresher center-right alternative. Romney is now, in fact, defying the alternative that has emerged in former Florida Gov. Jeb Bush. Romney, it turns out, isn’t satisfied with the Bush option, just as Bush was not prepared to sit back and wait for Romney to step in.

Romney may have seen some of the polls and focus groups showing independent voters (and some Republicans) are highly averse to another Bush in the White House — or another Clinton, for that matter.

Yet Jeb Bush seems equally convinced that Romney is not the man to prevent the election of Hillary Clinton.

This sudden clash of dynastic scions is both unexpected and, in certain quarters, unwelcome. That’s because Romney’s prior claim on the deeper pockets of the party, and many of its most seasoned operatives, conflicts with that of the party’s reigning dynasty. (It should be noted that the last time the Republicans won the White House without someone named Bush on the ticket was in 1972.)

All this makes a pretty irresistible story. We had largely written Mitt off — a year ago he was still responding to questions about 2016 by saying no. Not once, but 11 times in one quote in The New York Times. (Aside: four or five would have made the point, double digits smacks of protesting too much.) Even as he crisscrossed the country campaigning for other Republicans in 2014, Romney deflected questions about his own future. Older and wiser, he knew it was time for someone else. Or so it seemed.

Just a week ago, establishment Republicans were congratulating themselves on having an odds-on 2016 favorite in Bush — someone who could suppress the Tea Party and its roster of obstreperous populist upstarts. Party stalwarts were mentally reassembling the Bush team of money people and policy people. From there it would be paint-by-the-numbers, collect the nomination and sally forth to slay the dragon — or in this case the lady dragon, likely Democratic nominee Hillary Clinton.

A week ago Bush’s only real rival in the establishment wing of the party seemed to be Christie, the often-embattled governor of New Jersey, who has spent the past year dealing with one image problem after another from bridge closures to Cowboy clinches.

But now, it seems the old warrior in Mitt is spoiling for a fight, or at least for talking about one. He had a lot of positive reinforcement on the hustings this fall. It seemed as though the nation was awake to his message, and maybe to his persona too. The ship didn’t come in for him in 2008 or 2012, but was suddenly visible on the horizon. And, he reports, his once reluctant first lady, Ann, has acceded to another campaign.

And there was something else, something very much like needling coming from none other than Jeb Bush himself. The Floridian took several swipes at the weak points of Romney’s 2012 campaign — the failure to maneuver around the issue of personal wealth and the lack of outreach to Hispanics, women and young people.

All this might have recalled the hard feelings between the two men three years ago, when Romney was trying to lay claim to the 2012 GOP nomination. Going into the critical primary in Florida, he badly needed a boost from the popular former governor in order to hold off the challenge from former House Speaker Newt Gingrich.

It might have been quite natural for Jeb Bush to embrace Romney at the time, as many others in the party hierarchy were doing. The two men had served as governors together in the previous decade, and Romney had wooed his former colleague assiduously. And there was that old bad blood between Gingrich and the first President Bush in the 1990s.

In 2012, however, Jeb Bush remained stubbornly aloof. The official line was that neutrality was best for the party and the state. But was Bush ambivalent about Romney? Was he thinking a failed Romney candidacy would create an open convention that summer, a convention that might turn to him? Or was he unwilling to take sides and anger the party’s the more conservative core voters — people he might need later on?

It is unlikely that Romney has forgotten being held at arm’s length in this way.

Both he and Jeb Bush have a sense of mission inherited from their fathers (Romney’s was governor of Michigan and briefly a presidential aspirant in the 1960s). That is a personal burden that can bring men together. It is also an obsession that can set them on a collision course.

One thing is clear at this juncture. If both men run, they become each other’s first hurdle. Both will also need to deal with Christie, to prevent any establishment assets from being siphoned off in that direction. All three of these center-right candidates will need to focus first on each other, rather than on the base-oriented conservatives who will be vying to challenge them from the right.

In short, what had been a predictable contest has now the potential to be a far more volatile and intriguing test of the character and direction of the Republican Party in our time.