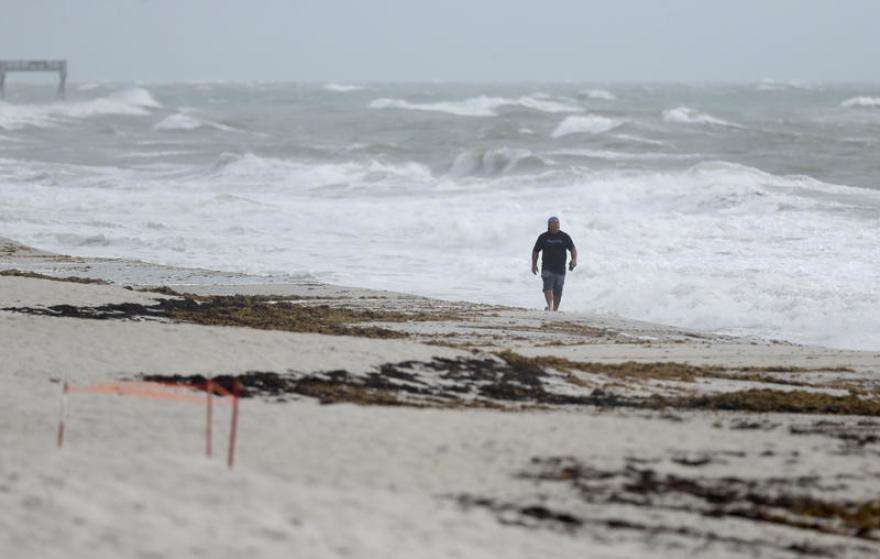 Hurricane Isaias was one of many storms in an active hurricane season in 2020. Photo: Wilfredo Lee

Researchers say the anticipated absence of the El Niño weather pattern might make for yet another “above average” Atlantic hurricane season.

This week is National Hurricane Preparedness Week. It’s a chance for people to get a head start on their prep for this year’s Atlantic hurricane season.

And according to the tropical storm experts at Colorado State University — it’s going to be a busy one.

Their latest forecast is for 17 named storms during the season, which runs from June 1 to November 30. Of those 17, researchers expect eight to become hurricanes and four to reach major hurricane strength.

To help us understand more about the findings, WLRN spoke with Jeff Huffman, chief meteorologist for the Florida Public Radio Emergency Network.

The following includes excerpts from that conversation, which have been lightly edited for clarity.

WLRN: The researchers at Colorado State University say one reason that the 2021 season might be rough is the anticipated absence of the weather pattern known as El Niño . What is that, exactly?

JEFF HUFFMAN: El Niño is the label given to a cycle of the equatorial Pacific waters warming above normal. The opposite of that is La Niña. And we are currently in that — where the waters in the Pacific are a little cooler than normal. This changes about every three to five years. La Niña tends to lighten the winds over the tropical Atlantic, which allows more hurricanes to form. This is the strongest signal we have leading into a season — whether or not it would be active or inactive, other than water temperatures.

Does the CSU report say anything about where these storms might make landfall?

The science just isn’t quite there yet for a credible forecast on what part of the Atlantic, Caribbean or Gulf [of Mexico] may be affected more than another location in any given year. However, we’re moving in that direction. There are some factors that lead to more activity, per se, in the western side of the Atlantic versus the eastern side, depending on where the water temperatures may be the warmest and the wind shear may be the lightest.

Those forecasts have dramatically improved in the last few decades, but only for the time period of three to five days out. So generally speaking, it’s pretty standard in our industry not to forecast the track of a storm longer than five days out — because so much could change.

If CSU’s current forecast turns out to be correct, how many “above average” Atlantic hurricane seasons will there have been, back to back?

If we were to have an above average season this year, it would be the sixth in a row. That’s in terms of the number of cyclones in the tropical Atlantic basin. And it’s important to note that this year the “normals” — the 30-year running averages — are going up. This would be the first year with the newest numbers. Last year, the averages were 12 tropical storms, six hurricanes. Those numbers this year — at least the 30-year running average — are now 14 tropical storms and seven hurricanes.

For more information on how to prepare for the 2021 Atlantic hurricane season, please visit the National Weather Service’s website.

And for additional tips and checklists, please visit the Florida Division of Emergency Management’s website.