“Welcome to the Jetsons Era”: Take a Ride on Beep Autonomous Shuttle in Lake Nona 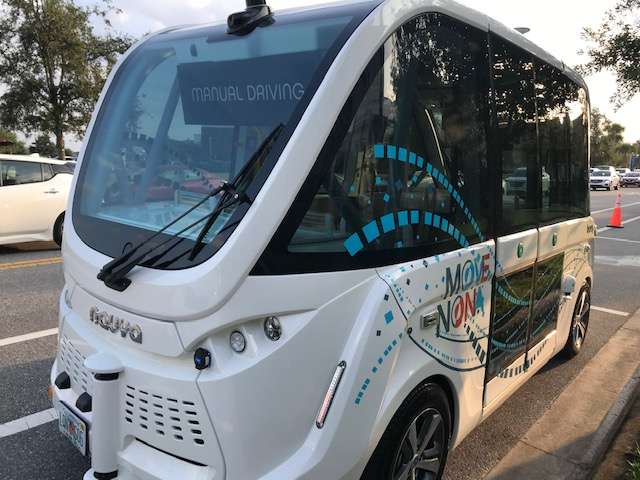 A Beep shuttle is parked at the Village Green in Lake Nona. Photo: Danielle Prieur

The cars can only go about 15 mph but they provide free public transportation for Lake Nona residents and visitors.

Orlando Mayor Buddy Dyer says he wants to expand this service or something like it into the downtown area.

“We would like to advance the technology so that we can use autonomous vehicles for the LYMMO system downtown eventually. I don’t see that happening in the next year or so but we’re certainly working toward that.”

Today is another historic moment for our community – not only furthering our transportation options, but also as we continue to embrace new technologies and partnerships. @beepAVsolutions autonomous shuttle service has launched in @LearnLakeNona! pic.twitter.com/8LVcPC4kr6

Orange County Mayor Jerry Demings says the driverless shuttles are an extension of Walt Disney’s dream for Central Florida and says one day they could carry tourists between theme parks and other attractions.

“I can certainly see something like this of use in our tourism corridor out on the International Drive area around the Convention Center where we have to move significant numbers of people.”

French company NAVYA designed the cars to stop at stop signs and yield for pedestrians.

CEO Jerome Rigaud says they’re already in talks to expand these services into other Florida cities.

The shuttle service leaves designated stops every 10 to 15 minutes between 10 am and 2 pm and then again between 6 pm and 10 pm every day.

An attendant in each car can take over the controls during an emergency.

The cars are not ADA-approved and cannot accommodate booster or car seats. Children under the age of 16 are required to ride with a parent or guardian and wear a seat belt.

For more information on the shuttles click on the link.