‘We’d Have To Abandon Our Daughters’: Pandemic Delays International Adoptions 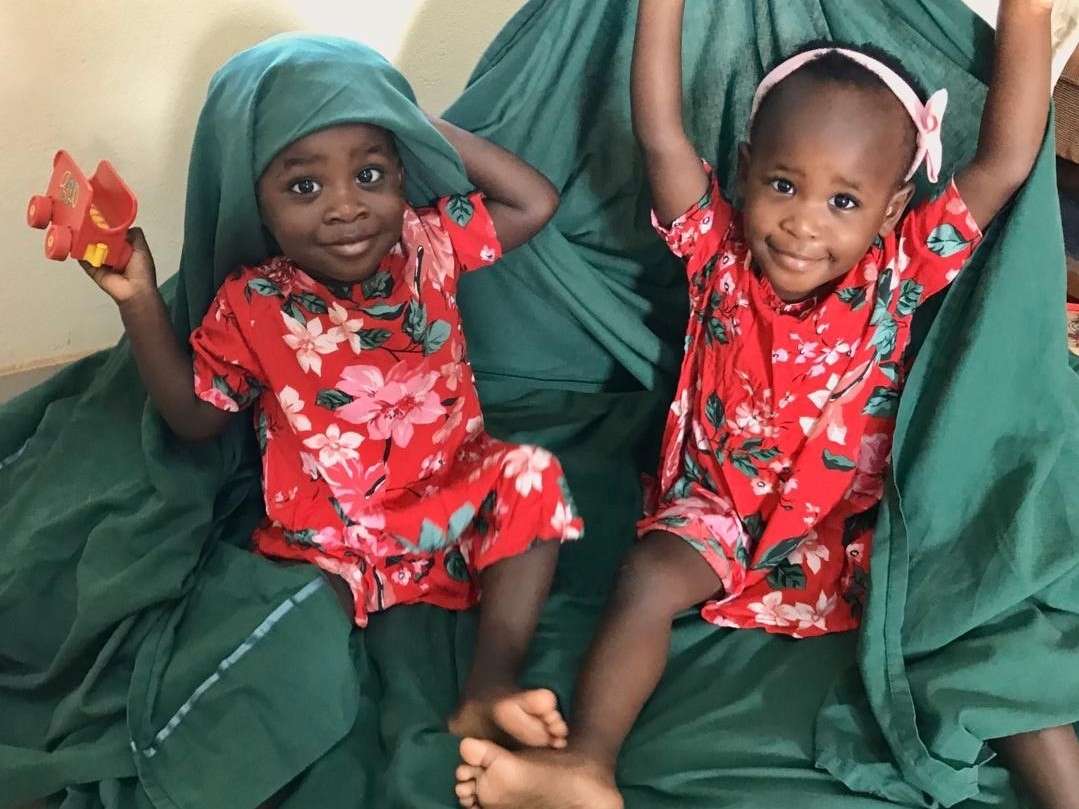 Recently adopted Chadian twins Claira (left) and Ariella play peekaboo to pass the time in Yaoundé, Cameroon, with their new parents, David and Michaela Parker, as they await their adoption visas. The 23-month-old girls cannot currently travel to America with the Parkers, who are petitioning the U.S. government for an exception for the girls' visas amid the coronavirus pandemic.

Just months ago, David and Michaela Parker felt like they were finally nearing the end of their two-year journey to adopt twins Ariella and Claira from Chad.

The American couple was living in the north-central African country when they got custody of the girls in August 2018. The Chadian adoption was finished by the end of that year. They submitted the required documents for the U.S. adoption process in 2019. Then this January, the family got the go-ahead to apply for the girls’ adoption visas, which would allow them all to travel to the U.S. as a family.

“We thought there was a light at the end of the tunnel, we thought we could see the finish line!” David Parker, 29, tells NPR.

But upon their February arrival in Yaoundé, Cameroon, a regional hub in Africa for these visas, U.S. immigration officials told the Parkers they would need to provide more evidence before applying. Dismayed, frustrated and confused, the family started to pull together the materials requested.

“Then the COVID-19 pandemic struck,” Parker says. “And now we’re kind of at a standstill.”

As borders closed and travel was restricted, it became impossible to complete the U.S. Consulate’s request. Moreover, the Parkers say they cannot return to the safety of their home in North Carolina because while David, Michaela, 24, and their infant son, Philip, are U.S. citizens — Claira and Ariella, now 23 months old, are not.

“We’d have to abandon our daughters here,” Parker says. “And that is something that we are not willing to do.”

The Parkers are just one of several families across the world dealing with being stuck in limbo amid the COVID-19 pandemic: unable to move forward because they don’t want to leave their children behind. And while the U.S. State Department is continuing to process adoption visas, many families, including the Parkers, have petitioned the government to grant emergency exceptions for the visas in light of the health crisis.

Bernier-Toth, who runs the office that oversees international adoptions into the U.S., says where conditions allow, adoption visas are still being processed. But these are on a case-by-case basis with constraints due to the pandemic — such as restricted travel and closed government agencies in other countries — making it difficult to move many cases ahead. It depends on which country is involved.

“In many places we may be at a point where we could schedule a visa interview, but people can’t actually physically get to us at the moment,” Bernier-Toth says.

Her office is exploring different avenues, such as possibly conducting visa interviews remotely.

Bernier-Toth also says parents who feel they cannot remain overseas can apply for humanitarian parole through the U.S. Citizenship and Immigration Services. This measure is “used sparingly,” according to the USCIS website, and essentially allows noncitizens to enter the U.S. on a temporary basis in emergency situations.

The State Department recognizes that “this is a very, very challenging time for everyone,” Bernier-Toth says, and that they’re “pushing those envelopes.”

Ryan Hanlon, vice president of the National Council for Adoption, an advocacy group, says the State Department should be doing more to help families like the Parkers. He points to the department’s own Foreign Affairs Manual, which says adoption visas should be a priority.

“That same Foreign Affairs Manual says that the Department of State has an ability to request and coordinate humanitarian parole in cases that are compelling,” says Hanlon, who is tracking over 20 cases like the Parkers in countries such as Nigeria, Bangladesh, Tonga and Papua New Guinea. “I don’t know how these cases aren’t being viewed as compelling.”

Hanlon says the State Department could request humanitarian parole directly, which would be much faster and come at no expense to the families — or request another non-immigration visa allowing the American parents to return to the U.S. with their child.

Hanlon says the slow-moving adoption process is grueling on families, even without a pandemic.

Beginning in the 1950s, the number of children adopted internationally into the U.S. has generally climbed until they peaked in 2004, when almost 23,000 babies were adopted from overseas. But ever since, they’ve dropped precipitously — by almost 80% — primarily because China, Guatemala and Ethiopia clamped down on inter-country adoptions. Many experts also argue that rising costs and regulations have made the process more cumbersome.

Hanlon says many cases should have been completed months ago, well before there was a global health crisis.

“But they’re being told that their only option [to return home] is if they abandon the children that they’ve legally adopted,” Hanlon says.

Meanwhile, the Parkers continue to wait it out in Cameroon.

Concerns for the family’s health and safety overseas during the coronavirus crisis are mounting. Most of the Americans have been evacuated from the missionary compound where they’re staying in Yaoundé, Parker says. And it’s becoming less and less safe to go out for groceries and supplies.

David Parker says they spend their days taking care of their children and reaching out to everyone they can think of — from diplomats to Congress members.

Parker says he’s concerned about what would happen if he or his wife come down with COVID-19.

“There wouldn’t be anyone to be able to take care of the children, so getting back to the United States is important for us,” he says. “But we just don’t know what’s going to happen.”