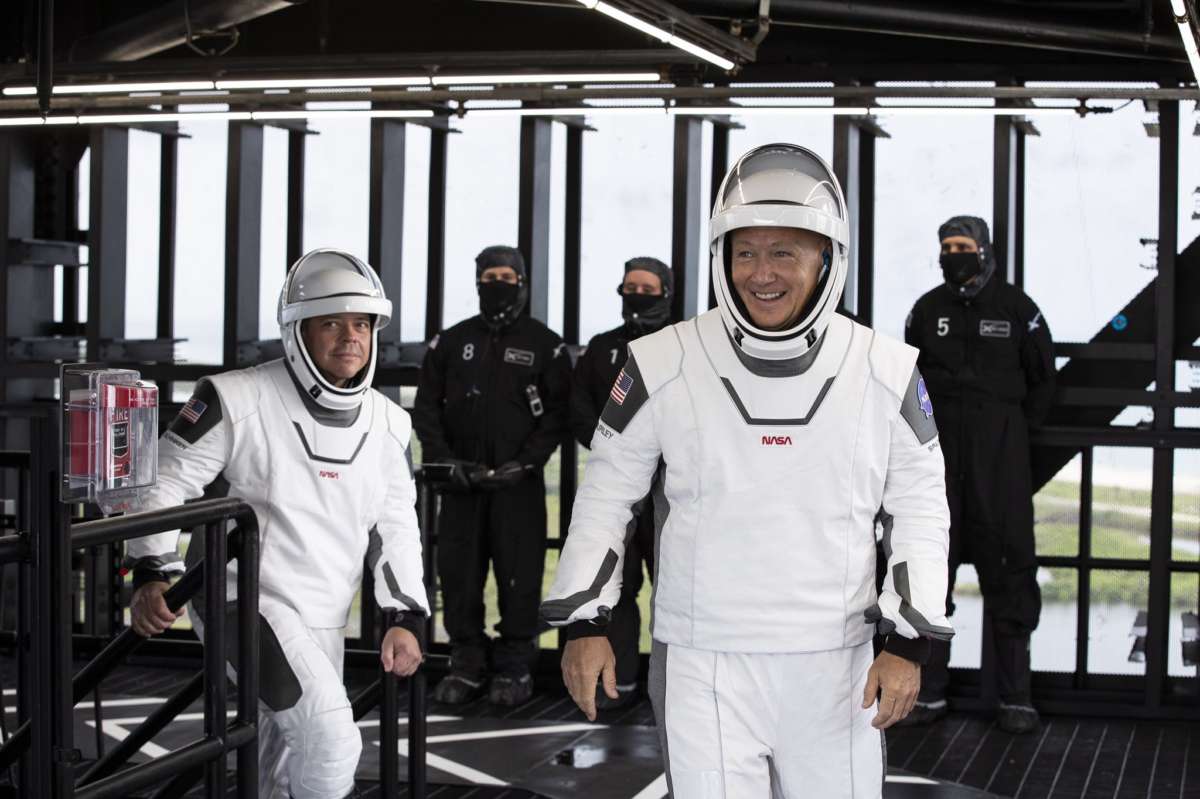 NASA astronauts Doug Hurley and Bob Benkhen in the launch tower at LC-39A ahead of Wednesday's attempt. Photo: SpaceX

SpaceX will try once again to launch two NASA astronauts from the Kennedy Space Center Saturday but weather could delay the launch once more.

Storms and lightning near KSC forced managers to scrub Wednesday’s attempt the launch of Bob Behnken and Doug Hurley with just 16 minutes left in the countdown.

SpaceX will try once again Saturday to launch the duo on a test flight of the company’s Crew Dragon capsule but weather may once again be a factor. The instantaneous launch is scheduled for 3:22 p.m. ET.

NASA and SpaceX completed a preflight Launch Readiness Review which examines the technical issues of the launch. Administrator Hum Bridenstine said no decision was made on the weather and teams with reassess early Saturday.

No decision on weather right now for Saturday’s test flight of @SpaceX’s #CrewDragon spacecraft. Will reassess in the morning. #LaunchAmerica

Flying through rough weather could pose great risks to the rocket and the capsule — like getting struck by lightning.  “Thunderstorms are likely to again be in the area of the launch site coming up on Saturday afternoon,” said Florida Public Radio Emergency Network meteorologist Ray Hawthorne.  “The reason why is we have west winds blowing across the peninsula and that tends to cause the storms to congregate near the Atlantic coast.”

The 45th Space Wing forecasts a 50 percent chance of weather affecting the launch Saturday. SpaceX and NASA are keeping a watchful eye at the weather and sea conditions under the rocket’s flight path in case the astronauts need to abort the rocket launch and escape in their capsule into the ocean.

If Saturday doesn’t work out, SpaceX has another launch attempt Sunday at 3:00 p.m. ET. Weather once again will be a factor.

“Slightly drier air is forecast to move in in the middle and upper parts of the atmosphere on Sunday but still there’s going to be a front in the area and enough low level moisture where scattered thunderstorms are possible again Sunday afternoon,” said Hawthorne.

SpaceX is launching NASA astronauts through the agency’s Commercial Crew Program, a $6 billion partnership with private companies to ferry astronauts to the station.

Once they do launch, Hurley and Behnken will be the first to launch from the U.S. since the end of the Space Shuttle program in 2011.