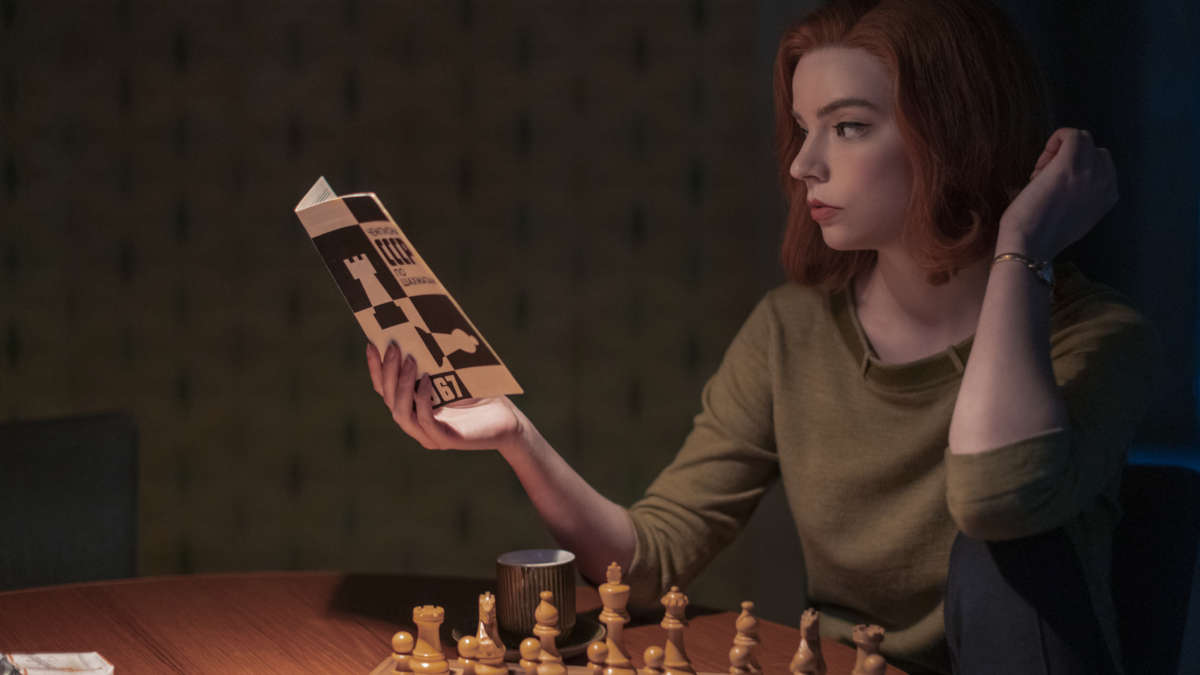 The Netflix series The Queen’s Gambit follows a chess prodigy named Beth, played Anya Taylor-Joy, from her childhood in an orphanage through her spectacular career in chess. She learns in a basement from a custodian and grows into a champion.

This year’s Tiny Desk Contest winner is Linda Diaz, a musician who, as it turns out, is also a chess expert who had a successful professional career in chess for much of her life. We figured there was no one better to talk to about chess, challenges and what the series does and doesn’t get right. Below are some excerpts from the conversation; you can listen to the whole thing below. Her bottom line: “I loved it. I watched the whole thing in two days.”

This interview is edited for length and clarity.

On the appearance of Beth’s first chess teacher, the custodian at her orphanage

A lot of children’s first experiences start with a mentor. So their parents, or their older siblings, or a coach. And I think that is what Beth had, even though it wasn’t necessarily called that by name. That was her first coach. Sometimes, especially for young girls who are discouraged from playing chess, I think it really does take someone seeing something in you and motivating you to work harder and be your best. That definitely happened to me at a young age. I had a good disposition to play chess, is what my coaches said. I was really quiet, and I could sit for a long period of time. And I was six years old, so that was a big deal. I was the worst chess player on the chess team, like until fourth grade, from kindergarten to fourth grade, which is a long time. And they were like, “Stick with it, keep her in the game.” And then in fourth grade, I just blossomed. I won City’s. I got second in State, and then I won SuperNationals, all in a row, and that launched my whole chess career. And that just took people really believing in me and motivating me. So, yeah, I think it’s incredibly realistic. I really did relate to that relationship that she had with her coach, the custodian.

On being a young woman playing elite chess

In terms of the show and Beth’s experience, a lot of that was similar to me, and even worse in some ways. I think the show definitely gets it right that she’s critiqued for having these traits about her that men have and are praised for. She plays a Sicilian [defense]; I also used to play the Sicilian. She’s an intuitive thinker; I also am an intuitive thinker. And she’s really aggressive. And I was also an aggressive player. And so it comes off as “you’re impatient,” and really it’s that you’re creative and you’re naturally gifted. And so I really saw that in her. I had a lot of people say, you know, you need to study your openings, study your end game, you need to do X, Y, Z, which I probably should have also done. But I did have these gifts that really took specific people to nurture those gifts.

I definitely have a lot of guy friends, obviously from chess. However, my experience was just being completely sexualized, not really respected as a person, even if I was respected as a player in some ways. I was oftentimes the youngest person in a lot of these rooms. I would travel internationally and grown adult men, sometimes with intentions, sometimes just out of ignorance, not knowing how old I was, depending on the age, would just be incredibly inappropriate to me in many ways. Like make me feel stupid, make me feel small, emotionally manipulate me. And I think a lot of women have this same experience. And so it was cool on the show to see Beth be very smart, very on it, having friends who are kind of looking out for her.

There are all these lines that kind of glorify it in the show, like “genius and madness go hand in hand.” But I really believe that’s true. You know, people whose brains think differently are often wired a little bit differently. And they’re often — if you’re very emotional, then you’re susceptible to certain things, or if you’re obsessed with a game, you usually have an addictive personality to go along with it. So, yeah, substance abuse was really common in chess. Especially because a lot of the culture, it being so male-dominated, and also [alcohol] being so much of a lot of individual countries’ cultures. Drinking is huge in some tournaments; you can even drink at the board when you’re younger and you’re around adults who can drink and have, and it’s not really an issue. Alcoholism is a big issue for chess players. But also a lot of chess players are on prescribed substances for whatever reason. And so it’s really easy to fall into addiction that way. You’re playing eight-hour games and then waking up in the morning and doing the same thing. So some people it’s just like, you know, self-medication.

On Beth’s visions of the chess board on the ceiling

I think it’s different for everybody. I’m an audio learner, definitely, but a lot of chess players are visual, especially because one of the biggest aspects of chess is space and time and then your position and things. So any chess player that’s going to be on any kind of expert professional level has to be able to visualize the board. But for me, I guess it’s second nature. It’s kind of like translating. For me it feels like, I’m bilingual in Spanish, you know, I’m thinking something in English. Maybe that’s my primary language, but then it’s easily translated in Spanish. That’s kind of the way that it feels with chess for me. Like, OK, I’m sitting and looking at a position, and I see all of these permutations. And the thing that I visualize isn’t a totally different, you know, on-the-ceiling board that comes and speaks to me or anything. But it is a similar concept. I just don’t think it’s so visually apparent to me because it’s like second nature.

On the scenes of fans closely following tournaments in real time

You know, there’s live streaming chess and there’s a whole Twitch world now. But back then, those scenes of the little boy running out to the crowd outside to tell them what moves she played? And then there’s the demonstration board? That’s all real. I used to play in tournaments in other countries. … When I’d be done with my game, I would go and watch the super amazing chess players. But you can’t stand next to the world champion. You can’t just go up behind his game in the way that you can go behind your friend’s game. So they would have giant demonstration boards. … And then they would have them on a projector outside of the room for people to watch. And then you can comment in real time.

On chess and music

The more I talk about chess and the more I talk about music, I’m realizing that I think of them the same way. … When I write a song, I’m like: That was right. There was no other way to write it. There was no other option. I’m one hundred percent sure that that’s the way it was. And it’s kind of the same way of being an intuitive chess player. So I learned a lot from chess, as I said, about the intentionality that you need to succeed in something that you love. And I’m really lucky to have been naturally gifted at chess and naturally gifted as a musician. So both chess and music are things that you can get better at just by practicing. But I learned from chess that even if you are the cream of the crop, whatever, you can’t get by without practicing and keeping your mind sharp. And it’s all so much muscle memory. And the same thing is true, especially of being a singer. It’s muscle memory.