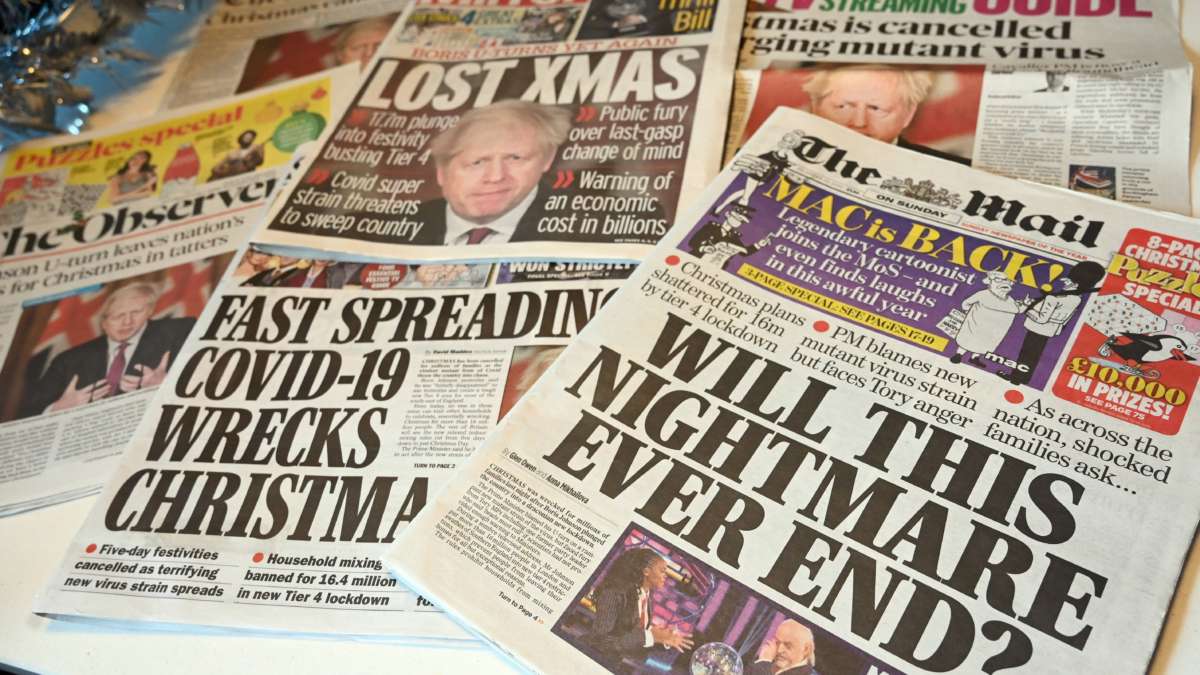 An arrangement of U.K. daily newspapers shows front page headlines reporting on the tight new coronavirus restrictions for London and the southeast of England, cancelling Christmas gatherings for those in the new "Tier 4" category.
Image credit: Paul Ellis

The United Kingdom has entered a period of intense restrictions after a mutation of the coronavirus was discovered spreading rapidly through the population of London and the southeast and east of England. Most of the country faces a strict lockdown as Christmas approaches, and several countries throughout Europe have banned travel from the U.K.

The British government put several parts of England into what’s known as “Tier 4” restrictions after the spike in infections. Prime Minister Boris Johnson announced the new restrictions on Saturday.

“Given the early evidence we have on this new variant of the virus — the potential risk it poses — it is with a very heavy heart I must tell you we cannot continue with Christmas as planned,” Johnson said. “In England, those living in Tier 4 areas should not mix with anyone outside their own household at Christmas.”

The new restrictions are broadly similar to the national restrictions that were in place in November. Residents in the affected areas can’t leave their homes except for essential trips; non-essential retail — as well as indoor gyms, movie theaters and hairdressers — have been forced to close. If people want to spend time with those outside their household, it can only be one person at a time, and it needs to be outdoors. (One difference from November’s restrictions is that communal worship can still take place.)

Outside the Tier 4 areas, up to eight people from three households will be able to meet — but on Christmas Day only, rather than over the course of five days, which was the case under previous guidelines.

Ahead of the new rules, videos surfaced on social media showing thousands of Londoners standing in packed train stations, ready to make a mad dash out of the city. Trains were “crammed,” one reporter said, and social distancing wasn’t possible.

“There were these scenes out of rail stations in London — particularly St. Pancras station — where thousands of people were fleeing London,” NPR’s Frank Langfitt told Weekend Edition. “It was clear that they’re trying to go off for family holidays, to go to other parts of the country where there are fewer restrictions.”

Transit officials have announced they will put more officers at train stations to stop unnecessary trips, and put more police on the roads to stop people from leaving locked down areas, Langfitt said.

Ireland, Germany, France, Italy, the Netherlands and Belgium have all banned flights and travel from the U.K., the BBC reported. The European Union will meet Monday to discuss a coordinated response.

The new mutation could be up to 70% more transmissible than earlier variants of the virus, Susan Hopkins of Public Health England told the BBC. This variant was first identified in the middle of October from a sample taken in September, Hopkins said.

“In early December, while were trying to understand why [cases in] Kent and Medway continued to increase despite the national restrictions, we found a cluster that was growing very fast.”

Only this week did researchers realize the variant was more transmissible than other variants, Hopkins said. They alerted the government on Friday, and the new restrictions were announced the next day.

While the new variant seems to be more infectious, scientists say there is no evidence that it leads to a more severe illness, according to Vivek Murthy, who President-elect Joe Biden has announced as his nominee for U.S. Surgeon General. “There’s no reason to believe that the vaccines that have been developed will not be effective against this virus as well,” Murthy said on NBC’s Meet the Press.

Ronald Klain, Biden’s incoming chief of staff, told CBS’s Face the Nation that the president-elect would be briefed on the new variant “early next week.” The U.S. government could make changes to its own pandemic restrictions based on the advice of medical experts, Klain said.