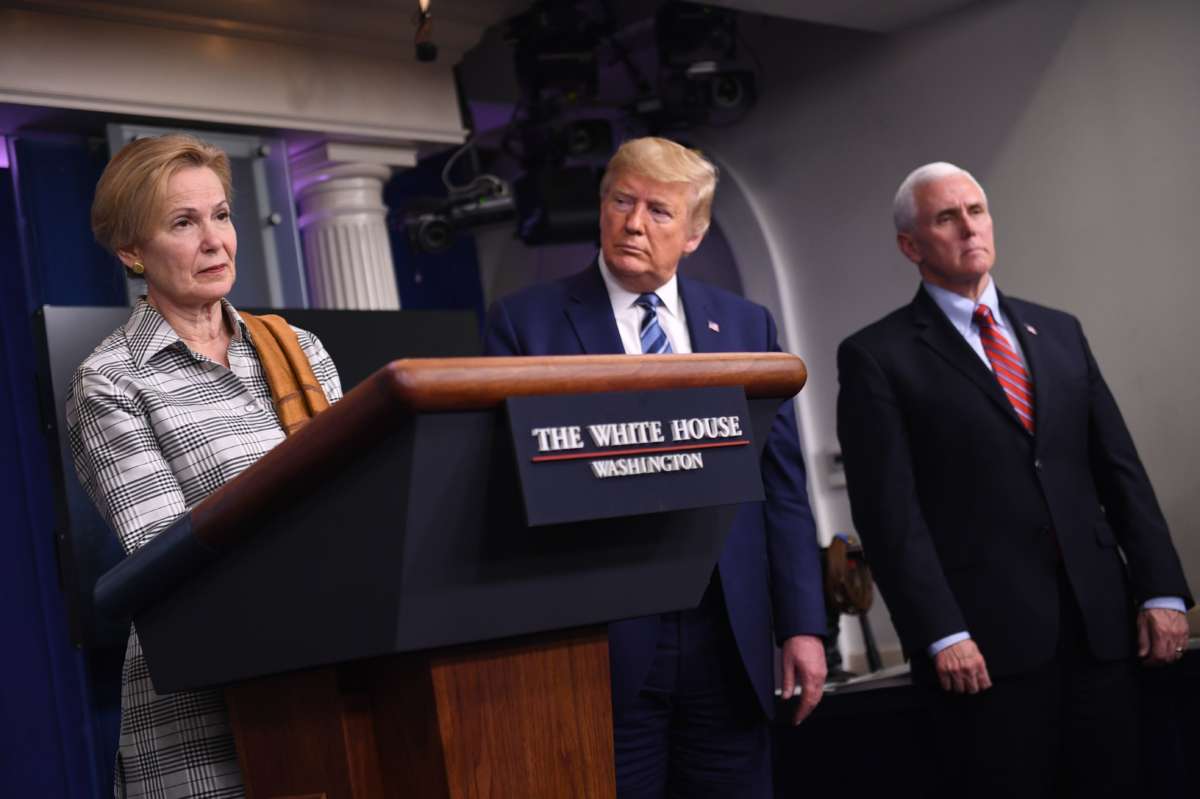 Deborah Birx, response coordinator for the coronavirus task force, speaks after a meeting at the White House on April 5, 2020.
Image credit: ERIC BARADAT

With over 347,000 confirmed cases of the novel coronavirus in the United States and more than 10,000 deaths, the Trump administration is bracing the public for a dire week ahead.

U.S. Surgeon General Jerome Adams said on Fox News Sunday the week will be “the hardest and the saddest week of most Americans’ lives.”

The White House scheduled a briefing to provide an update on its response at 5:00 p.m. ET Monday. Watch the briefing live.

In a last-minute press conference with the coronavirus task force on Sunday evening, President Trump tried to offer a message of hope.

“We’re starting to see light at the end of the tunnel,” Trump said. “And hopefully, in the not-too-distant future, we’ll be very proud of the job we all did. We can never be happy when so many people are dying, but we’re going to be very proud of the job we did to keep the death down to an absolute minimum — the least it could have happened with this terrible, terrible virus.”

Dr. Anthony Fauci, a top immunologist and member of the task force, acknowledged the administration’s messaging may seem contradictory — to both warn Americans about the grim week ahead while also offering optimism — but said it isn’t.

“If we start seeing now a flattening or stabilization of cases, what you’re hearing about potential light at the end of the tunnel doesn’t take away from the fact that tomorrow or the next day is going to look really bad,” Fauci explained. “So we’ve got to make sure we realize we’re always talking about a two-and-a-half-week lag.”

The president went on to describe the measures taken to aid Illinois, including the construction of a hospital in a convention center in Chicago.

“And we’re helping to staff it and probably will end up staffing it because he’s not able to do what you’re supposed to be able to do as a governor. He has not performed well,” Trump said.

President Trump also said the country has stockpiled 29 million doses of hydroxychloroquine, a drug he frequently mentions as a potential treatment for the coronavirus.

In response to a question from CNN’s Jeremy Diamond about why Trump doesn’t let science speak for itself in determining whether hydroxychloroquine is an effective treatment, Trump claimed he hasn’t been promoting the drug (even though he has) and called CNN “fake news.”

Trump later stepped in to prevent a reporter from asking Dr. Fauci to comment on the drug.