Officers Give Harrowing Testimony On Their Experience Defending The Capitol On Jan. 6 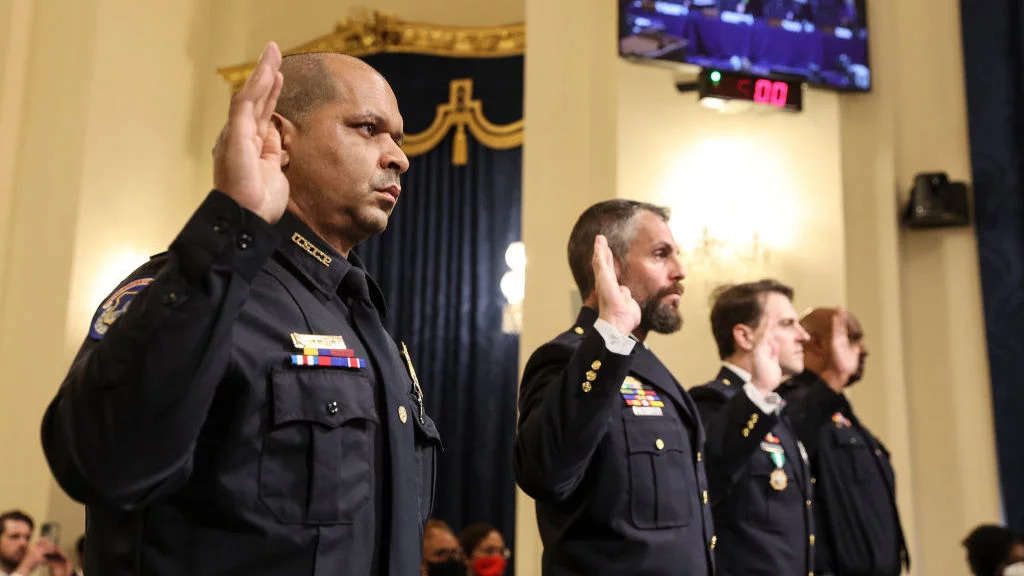 House Speaker Nancy Pelosi, D-Calif., speaks to reporters on July 1 with Democratic members of the House select committee that will investigate the Jan. 6 insurrection at the U.S. Capitol. The panel is holding its first hearing on Tuesday.
Image credit: Alex Wong

Four police officers testified about the physical and verbal assaults they faced responding to Jan. 6 riot at the Capitol on Tuesday in a highly emotional hearing.

Gonell recounted the events of that day and the impact it has had on law enforcement officers: “For most people, Jan. 6 happened for a few hours,” he said. “But for those of us who were in the thick of it, it has not ended.”

It was the first hearing held by the Democratic-led House select committee investigating the attack. Lawmakers on the panel lauded the officers’ heroism and blasted colleagues who have denied the events of that day.

What the officers saw, felt and heard

The Metropolitan Police’s Fanone described his experience heading to the Capitol on Jan. 6 to assist the Capitol Police. He said the scene he found as he worked his way to the Capitol’s West Front, where thousands of rioters were violently clashing with police, was “nothing short of brutal.”

Fanone decried those in Congress who are “downplaying or outright denying what happened” that day, saying, “I feel like I went to hell and back to protect them.”

“The indifference shown to my colleagues is disgraceful!” Fanone shouted as he pounded the witness table. “Nothing, truly nothing has prepared me to address those elected members of our government who continue to deny the events of that day. And in doing so betray their oath of office.”

Hodges repeatedly called the members of the mob attack on the Capitol “terrorists.” He said that to his “perpetual confusion, I saw the ‘thin blue line’ flag, the symbol of support for law enforcement, more than once being carried by the terrorists as they ignored our commands and continued to assault us.”

Capitol Police officer Dunn said he was in the Speaker’s lobby outside the House chamber when one of the insurrectionists said “Trump invited us here,” and that Trump was still the president.

“Nobody voted for Joe Biden,” Dunn said the man told him. Dunn said he responded that he had voted for Biden, asking “Does my vote not count?”

He told the panel a woman in a pink MAGA shirt then yelled, “You hear that guys? This n***** voted for Joe Biden.” Dunn said that the crowd of around 20 people joined in screaming “Boo, f****** n*****!” Dunn continued, “No one had ever, ever called me a n***** while wearing the uniform of a Capitol Police officer.”

Asked what he was fighting to protect on Jan. 6, Officer Hodges responded, “democracy.” He added, “It was for democracy, it was for the men and women of the House and Senate, it was for each other, and it was for the future of the country.”

Rep. Jamie Raskin, D-Md., told the Hodges and the other officers that they were “heroes to all of America,” adding, “Those who attacked you and beat you are fascist traitors to our country and will be remember forever as fascist traitors.”

What the witnesses want from the committee

Lawmakers asked the officers what they wanted the panel to investigate. Fanone cited the “Stop the Steal” rally headlined by then-President Donald Trump ahead of the insurrection.

“The time, the place, circumstances of that rally, that rhetoric, and those events to me leads in the direction of our president,” he said.

Fanone said that he also hoped the committee would look in to whether there was collaboration between members of Congress, “their staff and these terrorists.”

Hodges added he hoped the committee would investigate “if any one in power had a role in this, if anyone in power coordinated, or aided and abetted, or tried to downplay, tried to prevent the investigation of this terrorist attack.”

Dunn said he uses the analogy of a mob hit to describe what he hopes for from the committee. “If a hit man is hired and he kills somebody, the hit man goes to jail. But not only does the hit man go to jail, but the person who hired him does,” Dunn said, adding, “I want you to get to the bottom of that.”

Panel calls for investigation of the “big lie”

Committee Chairman Bennie Thompson, D-Miss., gave impassioned opening remarks, describing the threat to democracy and blasting those who have dismissed the magnitude of what happened on Jan. 6.

“Some people are trying to deny what happened. To whitewash it. To turn the insurrectionists into martyrs,” Thompson said. “But the whole world saw the reality of what happened on Jan. 6. The hangman’s gallows sitting out there on our [National] Mall. The flag of that first failed and disgraced rebellion against our union, being paraded through the Capitol. The hatred. The bigotry. The violence.”

Rep. Liz Cheney, R-Wyo., one of two GOP House members named to the panel by House Speaker Nancy Pelosi, also gave an opening statement, saying the panel must look into the actions of former President Donald Trump on that day.

“We cannot leave the violence of Jan. 6 and its causes uninvestigated. We must know what happened here in the Capitol. We must also know what happened every minute of that day in the White House. Every phone call, every conversation, every meeting leading up to during and after the attack.

“Honorable men and women have an obligation to step forward.

“If those responsible are not held accountable, and if Congress does not act responsibly, this will remain a cancer on our constitutional republic.”

The second Republican member on the panel, Rep. Adam Kinzinger of Illinois, a member of the Air National Guard, said he was called to service during the unrest after the killing of George Floyd last summer, but said there was no comparison with what happened Jan. 6.

“There is a difference between breaking the law and rejecting the rule of law,” Kinzinger said. “Between a crime, even grave crimes, and a coup.” His voice breaking, he told the panel of four officers, “You guys won, you guys held,” he said.

“Democracies are not defined by our bad days,” Kinzinger said. “We’re defined by how we come back from bad days.”

Kinzinger said that many in his party “have treated this as just another partisan fight. It’s toxic and it’s a disservice to the officers and their families, to the staff and the employees of the Capitol complex, to the American people who deserve the truth and to those generations before us who went to war to defend self-governance. Because self-governance is at stake.”

Kinzinger said that “it’s time to stop the outrage, and the conspiracies that fuel the violence and division in this country. And most importantly we need to reject those that promote it.”

Who’s on the select committee

Pelosi last week rejected two Republicans named by House Minority Leader Kevin McCarthy, R-Calif., to serve on the panel, Reps. Jim Banks of Indiana and Jim Jordan of Ohio. Both Banks and Jordan are staunch backers of Trump and publicly expressed doubt about the motives of the panel.

Their rejection by Pelosi prompted McCarthy to withdraw his other nominees to the select committee. McCarthy threatened Republicans would conduct their own investigation into the events of that day.

The select committee is the latest attempt by Congress to look into the Jan. 6 insurrection and what led up to it. Trump was impeached over his involvement in the riot after days of public testimony. In addition, the Senate Rules and Homeland Security committees conducted their own set of hearings.

So far, more than 550 people have been arrested in connection with the storming of the Capitol, and more than half a dozen have pleaded guilty.