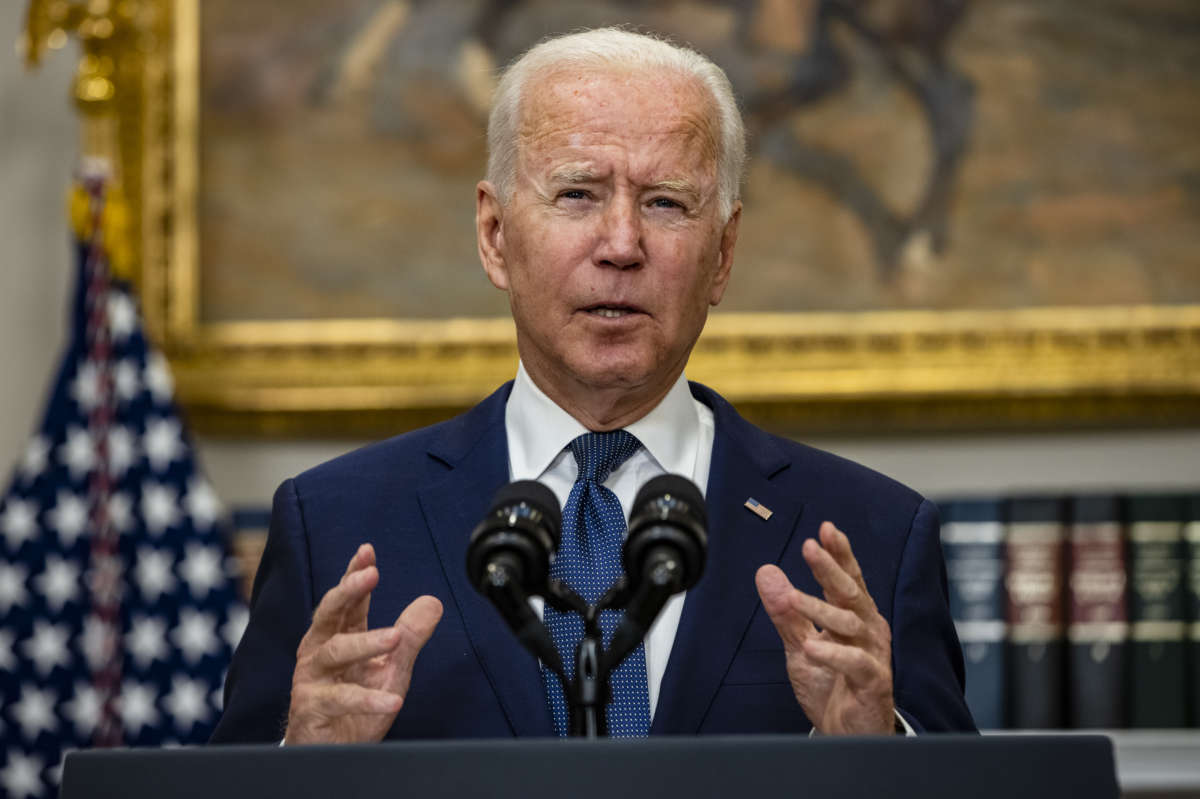 President Biden speaks in the Roosevelt Room on the continuing situation in Afghanistan on Sunday.
Image credit: Samuel Corum

President Joe Biden said Tuesday that he told G-7 leaders that the United States is on pace to finish its withdrawal from Afghanistan by his Aug. 31 deadline.

“The sooner we can finish the better,” Biden said in remarks from the White House. He noted that “each day brings added risk to our troops” and warned of a growing risk of an attack from ISIS-K — ISIS in Afghanistan — on the Kabul airport.

The remarks come as Biden faces blowback from congressional lawmakers on both sides of the aisle over his handling of the withdrawal, as well as questions about whether U.S. troops have enough time to get Americans and allies out of the country.

Biden also said he has asked the Pentagon and State Department for contingency plans if the deadline cannot be met.

White House Press Secretary Jen Psaki told reporters the U.S. military will be out of Afghanistan by Aug. 31 “based on the achievement of our objective.”

Biden also told allies that meeting that “completion of the mission by Aug. 31 depends on continued coordination with the Taliban, including continued access for evacuees to the airport.”

So far, the U.S. has evacuated about 4,000 American passport holders and their families, Pentagon Press Secretary John Kirby said in a statement.

“We expect that number to continue to grow in the coming days,” Kirby said.

Despite the Taliban’s quick takeover of Afghanistan, the president has defended his decision to withdraw, telling White House reporters on Sunday that he believes in the long-term ramifications of his choice.

“I think that history is going to record this was the logical, rational and right decision to make,” Biden said.

In his remarks on Tuesday, Biden noted that the G-7 allies agreed on a need to “coordinate our approach” to Afghanistan going forward, including holding the Taliban to a standard of not allowing Afghanistan to be used as a base for terrorism.

Of refugees, of which there would be potentially tens of thousands, the president also said anyone arriving in U.S. will have undergone a background check. He said the world needed to work together to take care of those refugees.

Biden has maintained that his goal is to get all Americans who want to leave out of Afghanistan. He has also vowed to try to evacuate as many Afghan allies who aided the U.S throughout the 20-year war as possible. On Wednesday, Secretary of State Blinken will give a “detailed report” on how many U.S. citizens remain in Afghanistan and how many have been evacuated, Biden said.

The White House expects that Afghan interpreters and others who the U.S. government is hoping to evacuate from Kabul should be able to get to the Kabul airport – despite assertions from the Taliban that Afghans would be blocked from the airport earlier in the day.

“That is not how you should read it,” Psaki told reporters who asked about the Taliban comments.

Psaki said the U.S. government was in direct contact with Afghans who qualify for evacuation.

“The individuals we have prioritized … our expectation is that they will be able to reach the airport,” Psaki said.

On Capitol Hill, concern remains over whether the exit date will be met

“I think it’s possible, but I think it’s very unlikely,” said Schiff, who also serves as the chairman of the Intelligence Committee.

“Given the number of Americans who still need to be evacuated, the number of SIV’s [special immigrant visas,] the number of others who are members of the Afghan press, civil-society leaders, women leaders, it’s hard for me to imagine all of that can be accomplished between now and the end of the month,” he added.

Senate Minority Leader Mitch McConnell made a more direct call Tuesday morning, urging Biden to “forget about the Aug. 31 deadline,” and instead focus on getting more Americans and Afghan allies out of the country.

“The Taliban should not be allowed to tell us how long we are there to get our personnel out. That’s our decision, not theirs,” he said.

People evacuated from Kabul are being held in third-party countries, including an air base in Qatar where there are “very challenging conditions,” a senior administration official told reporters on a conference call. Officials are working to try to make sure people have enough food, water and medical services. “This is a challenge. We are adjusting and improving as we do,” the official said.

The Washington Post and others have reported on the crowded and unsanitary conditions at the base.