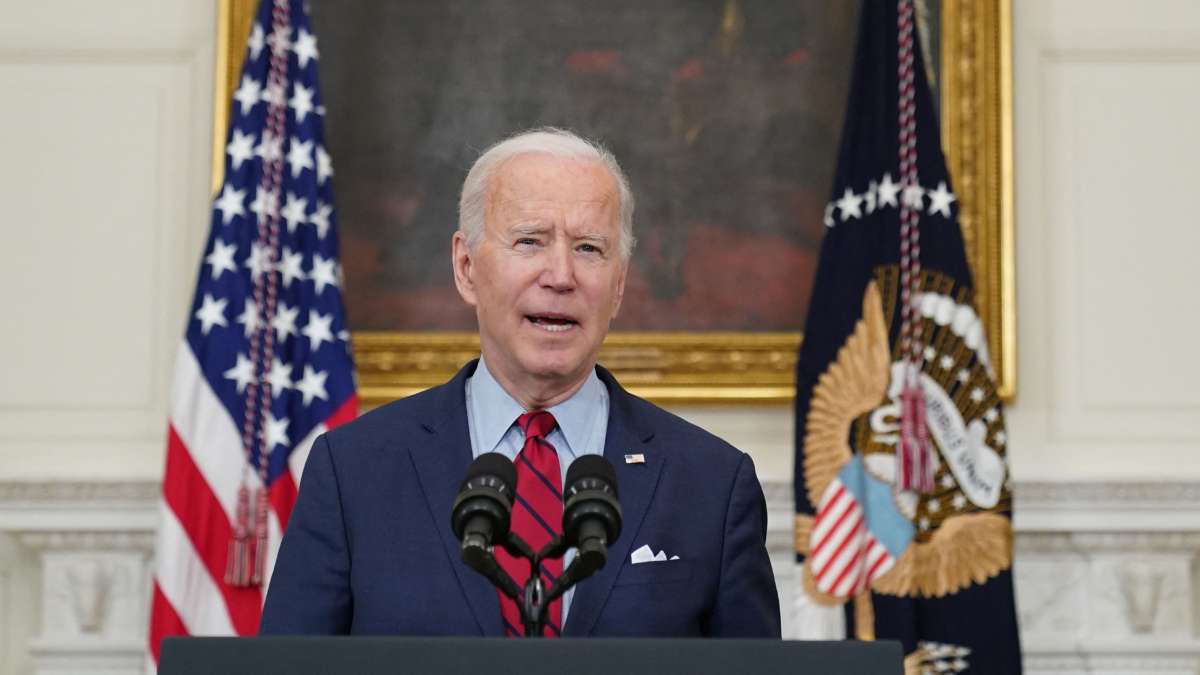 President Biden is doubling his original COVID-19 vaccination goal to 200 million shots in arms by his 100th day in office — which is just over a month away.

When he entered office, Biden said his goal was 100 million vaccine doses in 100 days — a target many observers thought was not ambitious enough. According to federal health officials, that 100 million figure was hit on Biden’s 58th day in office.

About 2.5 million vaccine doses are being administered every day in the United States.

He detailed his new goal Thursday, during the first news conference of his presidency.

Biden is also sticking to a goal of having a majority of K-8 schools open full time — in person, five days a week — by that same 100-day mark. So far, he said, roughly half of them are open full time.

When it comes to the influx of migrants at the southern U.S. border, Biden said the Pentagon is making 5,000 beds available at Fort Bliss in El Paso, Texas, to increase capacity.

He blamed the Trump administration for decreasing capacity and said his administration is building back up the systems that, he said, should have been maintained and built upon but that the former president “dismantled.”

The Biden administration has changed policy from the Trump hard-line action of refusing to admit unaccompanied minors during the pandemic. Biden defended taking that action, saying what former President Donald Trump did broke from prior practice of past presidents and was, essentially, inhumane.

He stressed that a parent’s decision to send their child to the United States unaccompanied on a dangerous journey shows desperation with their circumstances. Biden has assigned Vice President Harris to head up efforts to work with Mexico and Central American countries to stem the flow of migrants.

A solution to the immigration situation at the southern border has been elusive through Congress. When asked whether he would back eliminating or weakening the filibuster to facilitate his agenda, he delivered a potential threat.

If Republicans continue to make it a requirement for 60 votes to proceed to an up or down vote, “We’ll have to go beyond what we’re talking about,” he said obliquely. Biden has in the past signaled openness to dismantling the filibuster if Republican opposition refuses to relent.

Biden also reiterated that he is in favor of bringing back the “talking filibuster,” making it necessary for senators who want to hold up legislation to hold the Senate floor and speak.

Asked about gun violence following two high-profile mass shootings in the past week, Biden pivoted and said his next push will be on infrastructure. That’s something he said he will announce in more detail Wednesday in Pittsburgh.

His answer indicated that Biden, who in recent days urged lawmakers to pass firearm legislation, may not believe the political will is there now to pass substantive gun restrictions. Congress has been unable to pass strong gun legislation over the past two decades despite countless mass shootings in that time.

“My answer is yes,” he said, noting later that that’s his “expectation.”

It’s advantageous for a president to say he expects to seek reelection or he becomes a lame duck too quickly. In other words, if a president says he is not going to run for reelection, Congress begins to look past that president’s authority, reducing his political capital.

Biden also touted his early successes, including work to expand the COVID-19 vaccination program and the $1.9 trillion relief package enacted by Congress.

His remarks come a little over halfway through his first 100 days in office — a typical benchmark used to measure a president’s early progress. Before this news conference, Biden had taken questions intermittently from reporters, but nothing at this length.