‘We’re In A War With This Virus’: Biden Lays Out COVID-19 Vaccine Distribution Plan 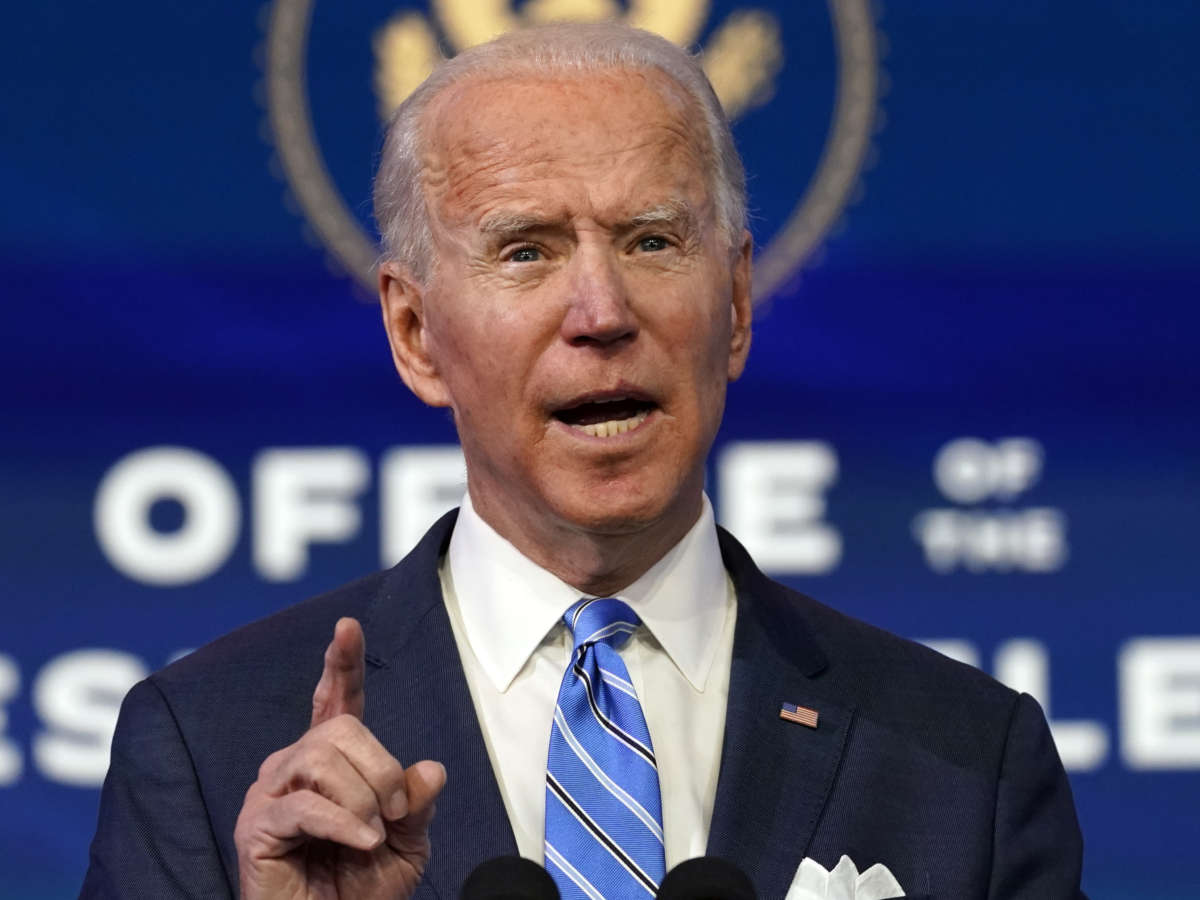 On Friday afternoon, President-Elect Joe Biden shared a detailed plan to tackle the COVID-19 vaccination rollout, promising to fight the pandemic with “the full strength of the federal government.”

In a speech in Delaware, Biden laid out his five-part plan for how to speed up the vaccination campaign: Open up vaccine eligibility to more people; create more vaccination sites; increase vaccine supply; hire a vaccination workforce; and launch a large-scale public education campaign.

He called for Americans to do their part to end the pandemic by wearing masks and keeping up social distancing as the vaccine rollout ramps up. “We’re in a war with this virus,” he said.

Biden’s plan emphasizes the need to jump-start a slow vaccine rollout he called “a dismal failure.” The COVID-19 vaccination campaign has reached just 3% of the U.S. population so far, according to the Centers for Disease Control and Prevention.

The first step in the plan, he said, is to “immediately work with states to open up vaccinations to more priority groups.” He called on states to expand eligibility to the vaccine to all front-line, essential workers and those over 65.

These guidelines are generally in line with priority recommendations from the CDC’s federal advisory committee but appear to push back the rollout of vaccines to people with underlying conditions — a vast, undefined group the Trump administration had urged states to prioritize earlier this week.

Biden also pledged to use data to ensure equitable distribution in hard-hit communities and to build partnerships with community organizations.

To expand the availability of vaccines, his administration intends to have the Federal Emergency Management Agency set up more vaccination sites across the nation to vaccinate millions of people in places such as school gymnasiums, sports stadiums and community centers.

To increase vaccine supply, Biden said he would use the Defense Production Act to up the production of items related to vaccine distribution, such as syringes and protective equipment.

He also plans to release nearly all the vaccine supply as it becomes available. “Right now, we are hearing [state and local governments] cannot plan. They do not know how much supply of vaccines they can expect, in what time frame. That stops when we are in office,” Biden said.

This week, states had expected to see a large jump in their vaccine allocations, after after Health Secretary Alex Azar pledged on Tuesday to release all vaccine doses held in reserve.

But governors are now expressing disappointment, as they’re learning that the reserve supply is already depleted. In a development first reported by the Washington Post and confirmed by NPR, government officials started quietly shipping out that reserve supply in late December, as their confidence in vaccine supply improved. Few doses remained in reserve by the time Azar made the announcement this week.

Biden also promised to be open with the public and to launch a large-scale public health outreach campaign to address vaccine hesitancy with factual information.

“We will always be honest and transparent about where we stand, both the good news as well as the bad news,” he said.

Biden cautioned this rollout may take “many months to get where we need to be. There will be stumbles.”

And of course, much of the plan will depend on Congress passing funding, which he said he is optimistic will happen.

“I am convinced the American people are ready to spare no effort and no expense to get this done,” he said. “This is going to be one of the most challenging operational efforts ever undertaken by our country, but you have my word: We will manage the hell out of this operation.”

The details of Biden’s vaccination plan accompany a larger relief proposal that he unveiled Thursday, called the American Rescue Plan, asking for $1.9 trillion in spending.

Public health experts are broadly supportive of his approach but say Biden’s calls for a speedy bipartisan deal mean that parts of the plan will likely be scaled back.

As part of the relief package, he calls for hundreds of billions of spending for the national vaccination program as well as other public health measures to fight the virus, such as testing and contact tracing; new jobs for public health workers; and expanded U.S. manufacturing for protective gear.

“This is the time for big, ambitious goals,” says Lindsay Wiley, director of the health law and policy program at American University, “It’s the right place to start.”

The American Rescue Plan is ambitious not just in its spending goals but also in its intent to mitigate the pandemic’s rippling effects, says Dr. Georges Benjamin, executive director of the American Public Health Association.

“There’s funding here to empower people to be able to stay home [if they’re sick], to get kids back in the school. There’s money here to support the economy, to get workers back to work. When you couple that with these health interventions [such as testing and contact tracing], this is really a way forward,” Benjamin says.

Biden assumes control next week of a country facing a raging pandemic that is killing nearly 3,500 people every day on average, with the risk of potentially faster-spreading new virus strains on the horizon.

Biden’s proposed plan funds 100,000 new community health workers, creating a workforce for tasks such as vaccine outreach and contact tracing that could transform public health in the U.S., Wiley says: “If we can engage a new, young energetic workforce … it could really put public health practice, public health infrastructure on good footing for a generation to come, like we saw with the Public Works Administration for past generations.”

“[He’s saying] here’s my plan for distribution. Here’s my plan for vaccination,” says Douglas Holtz-Eakin, president of the nonprofit American Action Forum, a conservative think tank: “If he takes ownership of this in a way that his predecessor never did, that can really raise the chances of it being successful.” He adds that he thinks there’s going to be consensus in Congress around funding vaccine distribution and other measures to combat the virus.

As it stands, the proposed rescue package would be the second largest in history, after the $2 trillion CARES Act passed in March. Health care experts expect it to be pared down as it gets debated in Congress.

“It’s an opening bid on what is necessary in the spring and early summer of 2021 to help people survive the financial fallout of the virus, but more importantly, to combat the ravages of the virus,” Holtz-Eakin says.

Holtz-Eakin lauds Biden’s intent to move with “urgency and bipartisanship” to pass his American Rescue Plan — and says that also means compromises are coming. He anticipates pushback on measures such as raising the federal minimum wage to $15 an hour, and funding for state and local governments.

“There is a case to be made for this. How big will always be in the eye of the beholder,” Holtz-Eakin says, “In the end, some [parts of the proposal] will drop out, some of it will get scaled back.”