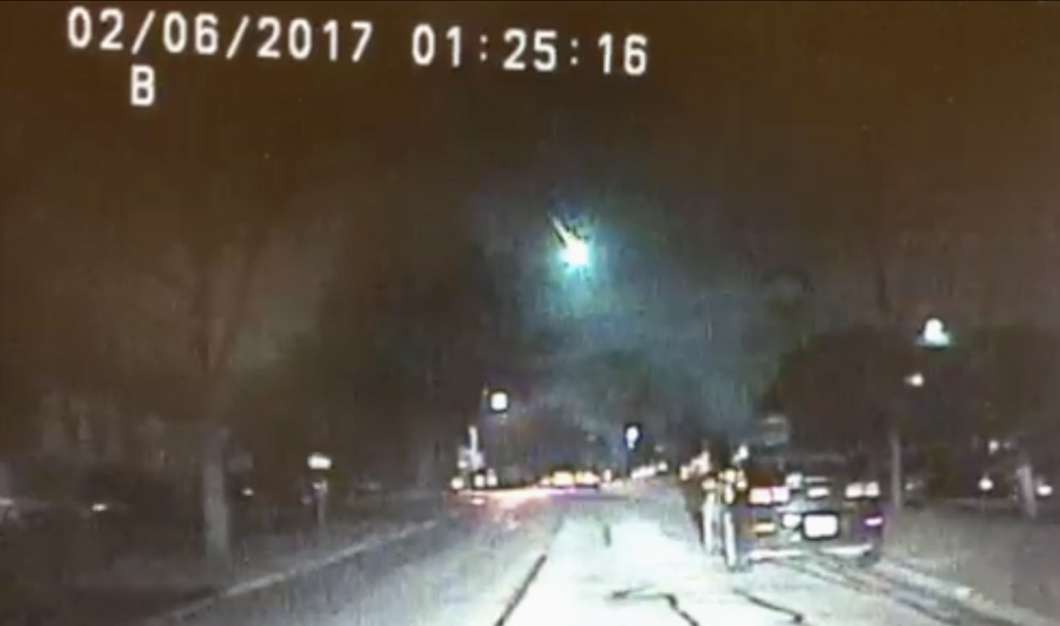 Dashcam video from the Lisle Police Department in Lisle, Ill., captured images of a meteor as it streaked over Lake Michigan early Monday morning.

If you were outside in the Midwest at around 1:30 local time this morning, you might have received quite a shock.

A meteor streaked across the sky in a vivid, bright green flash. It set off sonic booms that were loud enough to shake houses in east-central Wisconsin, as National Weather Service meteorologist Jeff Last tells The Two-Way.

Take a look at this video, captured on a police dashcam in Lisle, Ill.:

The meteor was visible in much of eastern Wisconsin and far northeast Illinois, Last says. He says the object likely broke up and that pieces might have ended up in Lake Michigan, though it is “probably going to be impossible to tell” exactly what happened.

Last says it is “relatively rare to see one this vivid” — he says meteorologists see video like this every year or every other year from somewhere in the U.S.

The American Meteor Society tracks reports of meteor sightings, and says that it received more than 200 today. Most of those reports were in Illinois and Wisconsin, but there were also sightings in Michigan, Indiana, Ohio, Iowa, New York, Kentucky, Minnesota and Ontario, Canada.

So why the bright green color? “It’s probably the interaction of the material in the meteor and the friction, the heat that is a result of the friction as it moves very, very rapidly through the atmosphere,” says Last.

The AMS explains that the makeup of elements can impact the color we see. For example, it says the element nickel can cause a meteor to appear green.

Meteors traveling at high speeds can “intensify certain colors compared to others,” it adds.