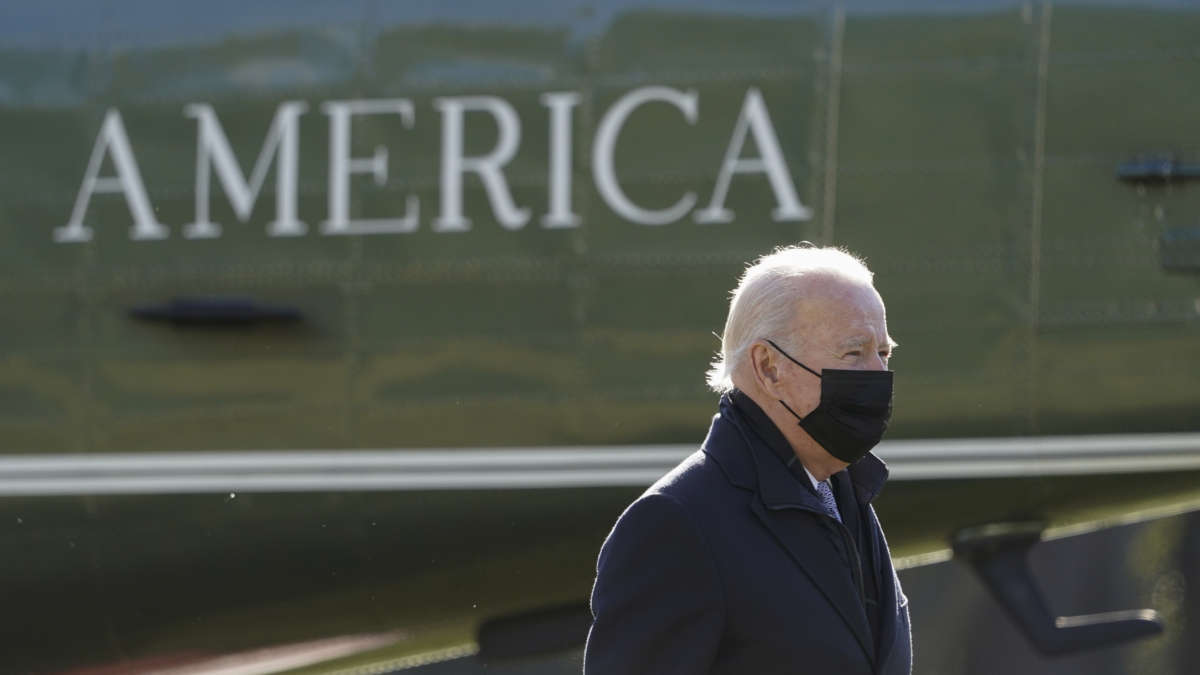 President Joe Biden walks to the Oval Office of the White House after stepping off Marine One on Jan. 10, 2022.
Image credit: Patrick Semansky

President Biden on Tuesday delivered a fiery speech on what he called “the battle for the soul of America,” urging an outright rejection of GOP-led efforts to restrict Americans’ rights to vote.

Speaking alongside Vice President Harris, Biden called for sweeping election reform and for the Senate to set aside its procedural rule known as the filibuster in order pass two bills intended to ensure access to voting in all states.

“Sadly, the United States Senate, designed to be the world’s greatest deliberative body, has been rendered a shell of its former self. It gives me no satisfaction in saying that,” Biden said.

“But as an institutionalist, I believe the threat to our democracy is so grave that we must find a way to pass these voting rights bills. Debate them, vote, let the majority prevail. And if that bare minimum is blocked, we have no option but to change the Senate rules, including getting rid of the filibuster for this.”

Biden delivered his remarks in Atlanta, Ga., home to the civil rights legend, late-Rep. John Lewis, and one of many places where Republicans have introduced legislation to limit eligible Americans’ voting rights.

Those restrictions include limiting mail-in voting and eliminating same-day voter registration – measures that have been especially onerous on poor people and people of color.

The president’s remarks were among his most forceful denunciations of both voter suppression legislation introduced in a number of Republican-controlled cities and states, including in Georgia, as well as for changing Senate filibuster rules.

Biden described this moment in history as “one of the rare moments in a country’s history when time stops and the essential is immediately ripped away from the trivial.”

The Jan. 6 Capitol insurrection, one year ago this month, was a recurring theme throughout Biden’s speech. He pointed to the deadly riot, in which pro-Trump extremists sought to undermine Biden’s election certification, and to voter restriction laws Republicans have introduced in the months since, as evidence of eroding democracy.

Americans, he said, “have to ensure January 6th doesn’t mark the end of democracy but the beginning of a renaissance for our democracy.”

Biden warned of the United States becoming an autocracy and said lawmakers will be judged on whether they support the Democrats’ bills.

“Each one of the members of the Senate is going to be judged by history on where they stood before the vote and where they stood after the vote. There’s no escape. Let’s get back to work,” he said.

The Democrats’ two bills: the Freedom to Vote Act and the John Lewis Voting Rights Act – would set new minimum standards for early and mail-in voting, among other changes. The legislation has widespread support among congressional Democrats, but Senate Republicans have used the filibuster to push them into legislative purgatory.

Biden’s call to at least temporarily do away with the filibuster in order to pass voting rights bills marked his starkest condemnation yet of Senate Republicans’ stonewalling.

Changing the Senate’s rules would require all Democrats to be on board. Sens. Joe Manchin of West Virginia and Kyrsten Sinema of Arizona have defended the current filibuster.

Despite the lack of consensus within his party, Senate Majority Leader Chuck Schumer on Tuesday said he plans to hold a vote tied to voting rights next week. If the vote is blocked, as expected, Schumer is weighing two options — a return to the talking filibuster or a carve out specific to the voting rights legislation.