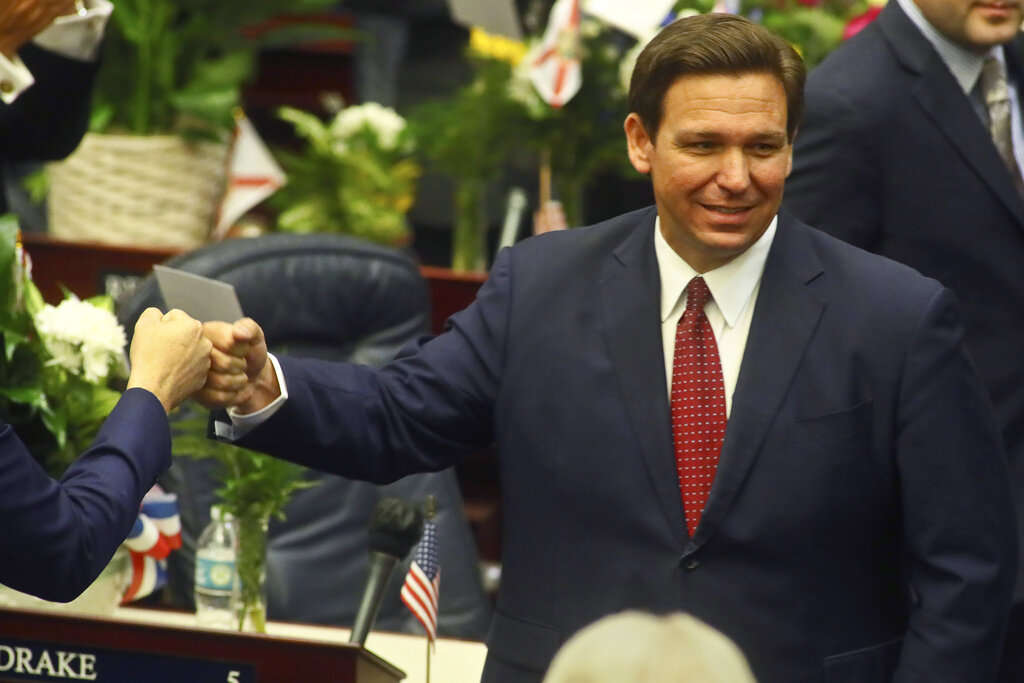 FILE - In this Tuesday, March 1, 2021 file photo, Florida Gov. Ron DeSantis fist bumps with legislators as he enters the House of Representatives prior to his State of the State address at the Capitol in Tallahassee, Fla. Democrats hope to make deeper strides in changing their fortunes in a state that has become friendlier place for Republicans. The state's only Democrat in statewide office, Agriculture Commissioner Nikki Fried is contemplating a challenge to Republican Gov. DeSantis. (AP Photo/Phil Sears, File)

Governor Ron DeSantis’s approach to COVID 19, and his legislative focus on conservative issues, have drawn national attention from the Republican party.

Henry Olsen, a senior fellow at the conservative think tank the Ethics & Public Policy Center, wrote a column for the Washington Post about what DeSantis must do to break out onto the national political stage.

Speaking on The Florida Roundup on Friday, Olsen said Republicans credit DeSantis with what they see as a successful COVID-19 response in Florida.

“The thing to remember about Republicans is that they tend to want to have a balance between fighting the virus and protecting the freedom and the economic lives of all Floridians — or of all people — and they believe that Ron DeSantis hit that balance,” Olsen said.

Olsen said if DeSantis wants to have a chance as a potential 2024 presidential candidate, he must differentiate himself from President Trump without distancing himself.

Currently, Olsen said, it would be impossible to win over the national Republican party without Trump’s support, but he admitted that may change by 2024.

“(DeSantis) has tried very much to be his own person, and his COVID success in elevating himself is proof that he’s no longer tied to President Trump’s coat tails,” Olsen said. “He’s playing it smart in that he’s neither slavishly attaching himself to Trump nor distancing himself. And the more he can pull that off and develop his own brand, the less he will need to rely on Trump should he run for president.”

Beyond his developing his own political brand outside of President Trump, Olsen believes DeSantis must become what he referred to as a “pan-conservative” candidate.

“There are many types of conservatives, and often times you have people who will focus on one type like a religious conservative, or a business conservative or a small government tax-cutting conservative,” Olsen said. “The person who wins the nomination has appeal among all of those groups instead of really building up support among some, and that is what DeSantis needs to spend the next couple of years doing.”

While 2024 is still three years away, Olsen said DeSantis’s early legislative focus on social media censorship concerns will set him apart with republican primary voters — even if his policies are symbolic or only have a small effect.

“By even something that would be as symbolic, or as small in fact, DeSantis can be one of the first people who says, ‘I did something to help stop that,’ and that would boost his national profile. It’s good politics.”